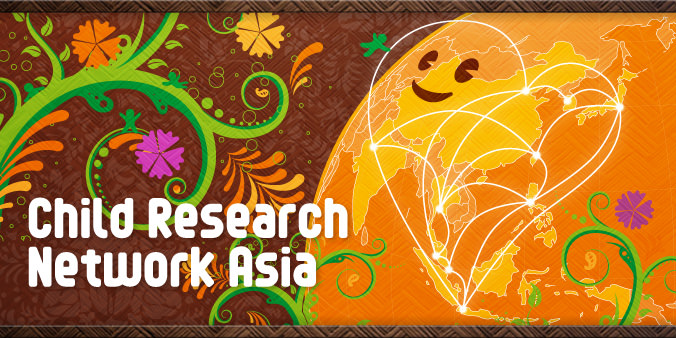 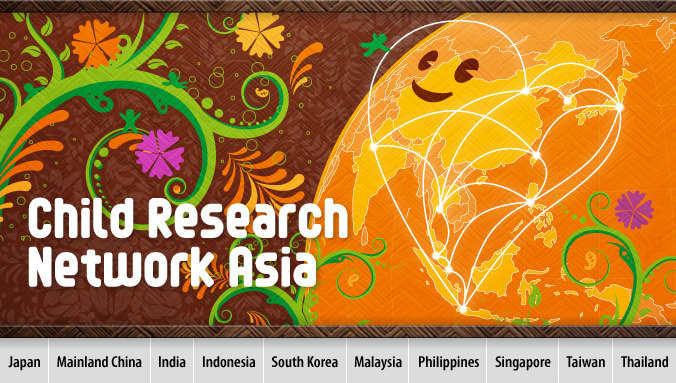 
The Third International Conference of Child Research Network Asia (CRNA) was held from September 25th to 27th in Jakarta, Indonesia. Some 200 participants comprising of researchers, ECEC teachers, and students from various countries and regions in Asia were present at the conference. This is a brief report on the conference, while detailed reports will follow soon (Presenters' titles and affiliations are as of the time of the conference.)

The theme of the conference was "Developing Children's Well-Being through Education and Parenting." To kick off the conference, Professor Sofia Hartati of the State University of Jakarta declared the opening as the host, followed by an opening introduction by Professor Jiaxiong Zhu, Professor Emeritus of East China Normal University and President of CRNA. Researchers from various countries and regions discussed issues related to child development and childrearing, childcare and education in Asia from their respective standpoints through the keynote lectures and workshop delivered.

The first keynote speech was given by Professor Yoichi Sakakihara, the Director of CRN and President of CRNA. He first stated the significance of focusing not only on the physical development, but also on the mental and social health, or the Quality of Life(QOL) when considering the sound growth of children. Then, based on various survey results, he introduced the importance of nurturing self-esteem in children in order to improve their QOL . (Detailed report) 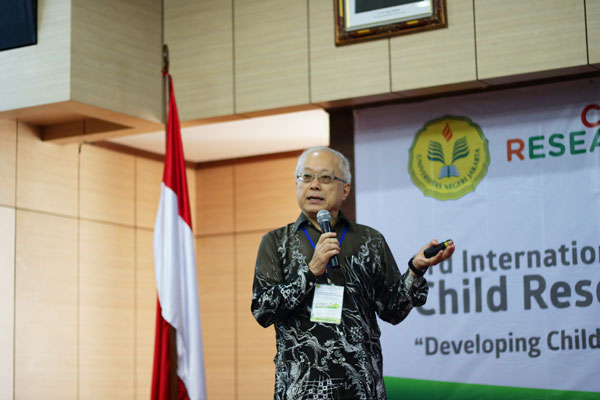 The third keynote speech of the first day was delivered by Professor Aminah Ayob, the leading expert in implementing STE(A)M into early childhood education in Malaysia. After briefly introducing the rough landscape of early childhood education in her country, she described the various concepts of STE(A)M, a new approach yet to be familiarized, and why it is attracting so much attention these days. Then Professor Ayob reported the reaction and achievement of children and teachers by introducing study cases in ECEC facilities in Malaysia where they actually implemented STEAM education, underlining the significance of practicing STE(A)M during early childhood education. (Detailed report) 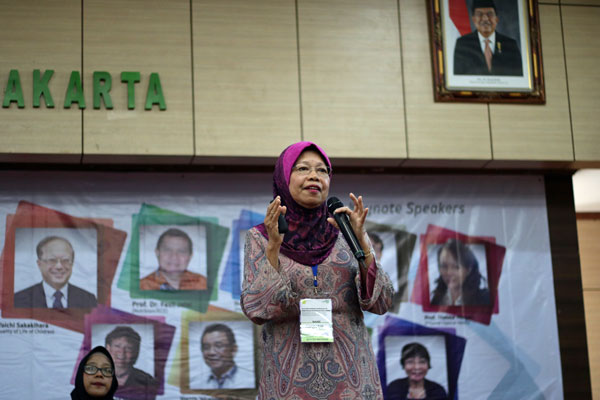 To start off the second day, Dr. Harris Iskandar gave a talk on Early Childhood Care and Education(ECCE) and childrearing mainly focusing on policies in Indonesia, where the conference was held. In the first half of his lecture, he stated how crucial the early childhood stage is in the long human life cycle, and introduced the Indonesian policy that targets to make the pre-primary year part of compulsory education by 2030. In the latter half, he concluded that teachers, parents, researchers, policy makers, and all those who are involved in children should work hand in hand to support parents and their childrearing environment which is becoming more complex as digitization progresses in this modern era. (Detailed report) 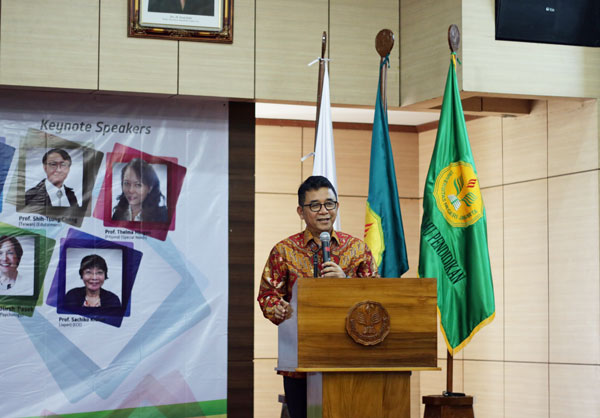 The next keynote lectures were delivered by two leading developmental psychologists from the USA through video-recordings. The first to speak was Professor Hirsh-Pasek who introduced the importance of playful learning and interaction of adults around children to promote social and cognitive development in children(Detailed report). Professor Golinkoff followed to talk about how children reared in high quality language environments grow into highly productive adults. She stated that interactive conversation based on a shared topic of interest between children and adults around them promotes such development.(Detailed report) 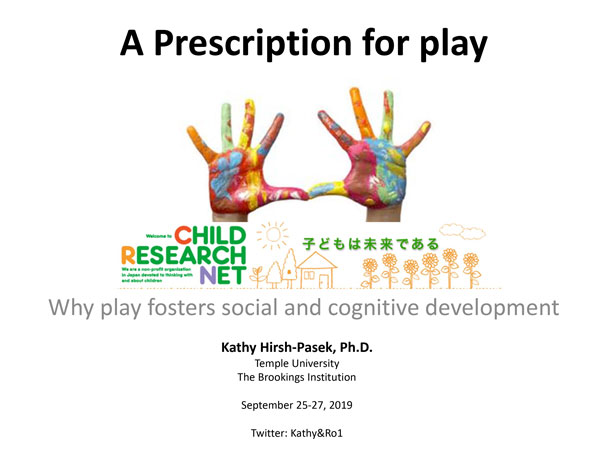 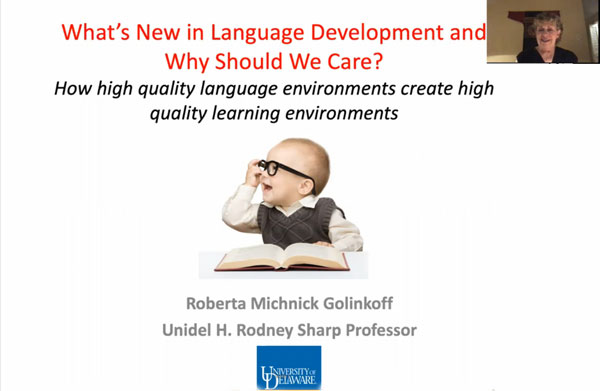 Former Deputy Minister of National Education of the Republic of Indonesia, Professor Fasli Jalal mentioned stunting as the crucial issue of children in Indonesia, reporting that it is associated with impaired cognitive development and lower educational attainment, even leading to reduced future productivity. He strongly emphasized that collaboration across all sectors shall be the key to solve this issue.(Detailed report) 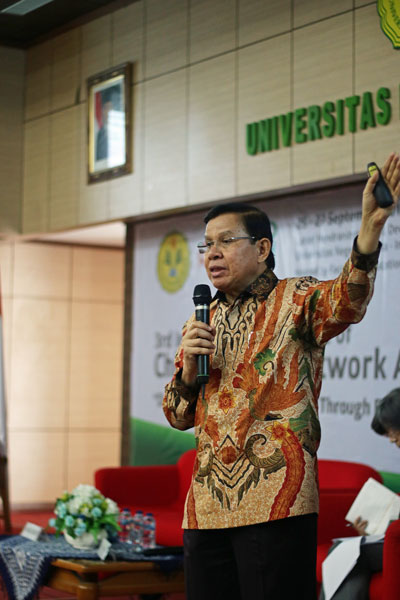 In the afternoon of the last day, Professor Sachiko Kitano from Japan delivered a keynote lecture. She explained that sometimes what is considered common knowledge among ECEC specialists is not necessarily so for the general public, so she spoke for the urgent need to visualize more clearly what children are learning through free-play. Introducing correlational analysis and pedagogical documentations as a means to make it visible, she reported how parents' awareness changed by introducing actual cases of parental involvement activities. 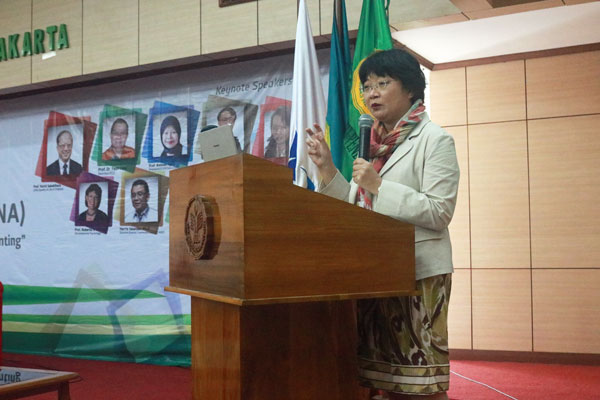 Apart from the seven keynote speeches mentioned above, a presentation titled "Nurturing of Children's Social and Emotional Skills Improve Learning: Longitudinal Study in Japan" was made by Ms. Junko Takaoka, the Research Manager of the Center for Child Life and Learning Research, Benesse Educational Research and Development Institute from Japan. Based on the results of a longitudinal study from early childhood to the fourth grade of elementary school, she made suggestions on how parents or caregivers should get involved with children at home or at childcare facilities in order to nurture their social and emotional skills. (Detailed report)

In the afternoon of the second day, a panel discussion was held, starting with Professor Sakakihara giving a talk on "Media and Neurodevelopment" followed by another presentation from Associate Professor Maulana Kusumah of The University of Jember, titled "The Mode of Social Engineering for Early Childhood Assistance in Vulnerable Community."(Detailed report)

On the last day, former professor Shih-Tsung Chang of Taiwan, currently the President of the International Play Association Taiwan branch, held a creative workshop titled "Play with Paper." As he showed how to fold a hat with a sheet of newspaper then to transform it into a shirt by simply ripping some parts out, the venue was filled with oohs and aahs of excitement from the participants.(Detailed report)

In closing, Professor Sakakihara, the President of CRNA, shared the concept of the activities of this network which was set upon its establishment: The 21st century is said to be the Century of Asia. For the better well-being of children in Asia, specialists, practitioners from different fields, and parents from around the world shall come together to discuss from various perspectives about the issues involving children so that we can find keys to the solution. This is our motivation toward "Child Research Network Asia (CRNA).
As the participants at the conference confirmed the future possibilities of working together for such solutions, the three-day meeting of CRNA Third International Conference closed with great success. 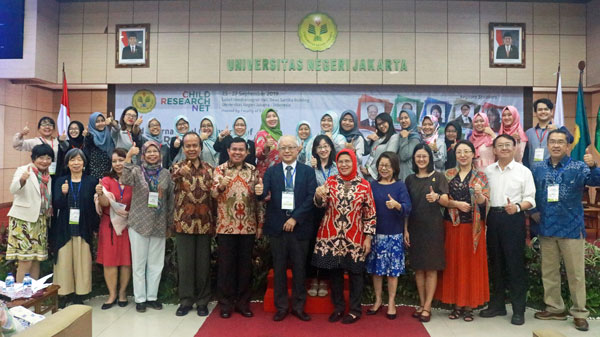 The 3rd International Conference of CRNA is a forum about children's well-being in Asia. It provides a perspective and insight into the development of children and their environment.

We hope the Conference will be an arena of exchanges that will contribute to the well-being of children in Asia.

Specialists from Indonesia, the Philippines, Taiwan, Mainland China and Thailand will also be participating.