Today, I will discuss the development of children's social and emotional skills based on a longitudinal research survey conducted by The Benesse Educational Research & Development Institute (BERD).

Let me introduce to you the five characteristics of the infant-parent relationship. First, there is a significant disparity when first becoming a parent. Longer life-spans and diversified lifestyles make it difficult to consider a life-cycle with average age milestones. The age of parents with children aged from six months to 1.5 years-old varies from 18 to 47 for the wife and from 19 to 59 for the husband (Japanese Longitudinal Study of Early Childhood Development and Parenting 2017-2018). Second, about 50 percent of the parents who have children aged up to two years didn't have previous contact with a baby. Third, double-income couples are increasing. Fourth, children attending daycare centers which provide childcare for longer hours are also increasing. Fifth, children have fewer opportunities to play with their peers, while interactions with their parents are increasing. Children's daily lives are centered on activities at childcare facilities and home.

Cognitive skills refer to knowledge and thinking skills. Generally speaking, social and emotional skills are: regulation of emotions and behavior, cooperation with others and achievement of goals (OECD, 2015). One of the triggers of focusing on these skills has been the implementation of the Perry Preschool Program conducted by James Heckman. The Perry Preschool Program is an intervention study program targeting three- and four-year-old African-American children from disadvantaged backgrounds over 40 years. Children who had received preschool education showed better school performance, higher high school graduation rates, homeownership rates, median monthly income, and lower welfare rates and arrest rates, compared to those who had not. These differences could not be explained by the difference in IQ, but the significance of social and emotional skills has been underlined. 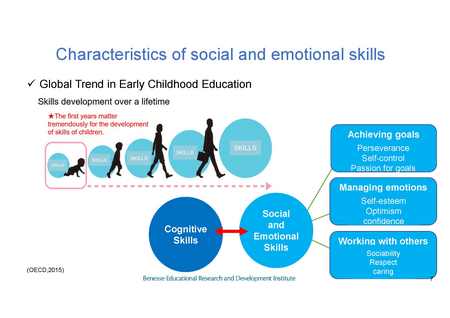 Click image to enlarge
Figure 1 Skills development over a lifetime

The development of good quality early childhood education and care (ECEC) is Goal 4 of the SDGs. It states "by 2030 ensure that all girls and boys have access to quality early childhood development, care and pre-primary education so that they are ready for primary education." This is related to other SDGs, such as the environment, good health, reduced inequalities, employment, no poverty, and gender equality. For the well-being of children and future development, it is essential to ensure ECEC provisions in every country. 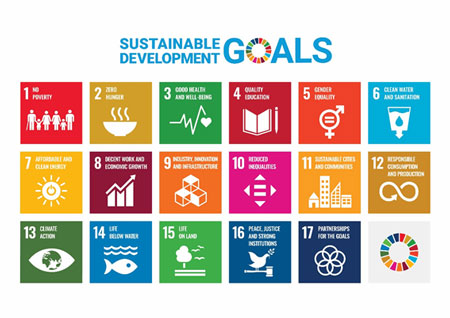 Since 2019, the Ministry of Education, Culture, Sports, Science and Technology of Japan has been implementing reform in a range of education levels from ECEC to high school. This reform sets "Three Pillars of Competencies" to be developed consistently for all children. These include "learning knowledge and skills," "developing skills to think, make judgments, and express," and "attitudes of learning to learn and humanity." The third pillar utilizes the former two to learn how to interact with society, and lead a better life. Attitudes of learning to learn will play an integral role in Japan's education system with equal significance to social and emotional skills.

Here, I would like to discuss the development of children's social and emotional skills (Attitudes of learning to learn), based on our longitudinal study targeting young children in Japan (Research on Home Education from Early Childhood to Fourth Grade of Elementary School (longitudinal study)). Three key skills were defined as necessary development for the adaptation to learning and living environments at elementary school and thereafter: "daily habits," "attitudes of learning to learn," and "cognitive skills." In our survey, the development of target children has been observed based on these three key skills for seven years from early childhood. Attitudes of learning to learn were classified into five categories; curiosity, collaborative skills, self-assertion, self-restraint and perseverance. Four to six measurement items were set for each. "Curiosity" is the ability to think "Why? How?" and ask appropriate questions. "Collaborative skills" is the ability to cooperate with friends, etc. "Self-assertion" is the ability to communicate one's own feelings and respect other opinions. "Self-restraint" is the ability to be patient when wanting to do something, but others disagree. "Perseverance" is the ability to confront challenges without giving up easily. 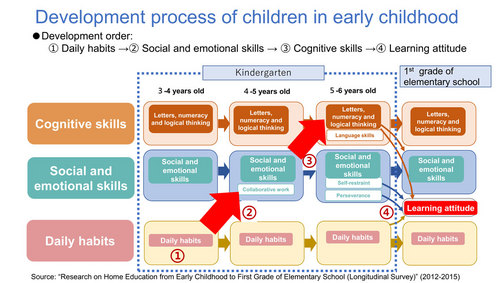 Figure 4 shows the development of children from infancy to fourth grade of elementary school. Regarding "perseverance and curiosity," the results show that children with high scores in early childhood tend to record similar high levels in the lower grade of elementary school. Children with a high level of perseverance, learning attitude and curiosity in the lower grade tend to do the same with good language skills and logical thinking in the fourth grade. Understanding how children acquire perseverance is important. It cannot be obtained by simply forcing children to develop it, or conversely, letting children do just what they want. I believe that it is important to provide play and learning environments and activities, which children enthusiastically work at, or even find innovative solutions when they cannot work well. 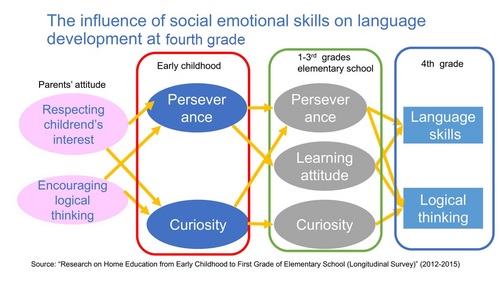 Parental Involvement at Home and Children's Social and Emotional Skills

How will parental interactions affect children's social and emotional skills? With regards to interactions with parents who respect their child's interest or encourage them to think for themselves in early childhood to the early years of elementary school, it is important that the parents listen to what a child says rather than saying "Think for yourself." Parents should support children by, for example, saying, "What do you mean by that...?" or "Please talk about this more." It is important to establish a parent-child relationship whereby parents think and talk with their child on the same level, and critically support thinking and expressing opinions.

Are there common factors in the development of social and emotional skills and parental attitudes across nations? Our survey (International Survey Research on Home Education in Early Childhood), conducted in Japan, China, Indonesia and Finland, showed numerous common factors. Table 1 shows the results of questionnaires to parents with children aged four to six. Positive answers were around 90% in all four countries regarding items relating to social and emotional skills as well as items relating to daily habits (The answers were on a five-point scale, ranging from "Very much" to "Not at all." The percentages indicated in table 1 are of those who answered "very much" and "somewhat."). 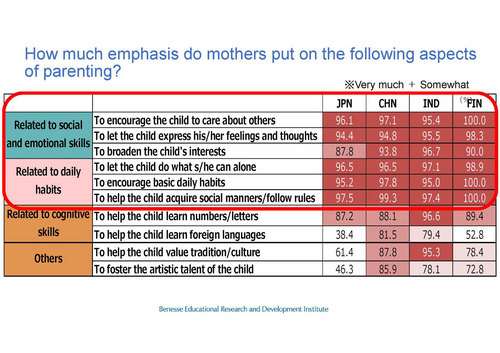 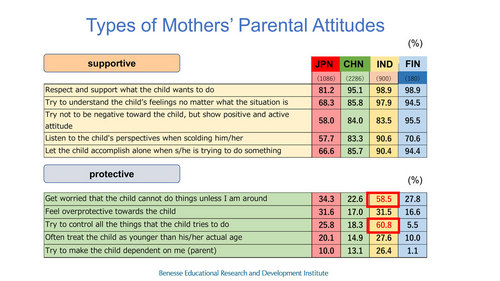 These are the three key findings from our research surveys. First, the development of children in early childhood is fundamentally based on daily habits. Subsequently, they acquire social and emotional skills as well as cognitive skills, which may affect their learning attitude at the stage of elementary school and thereafter. Second, parental attitudes such as respecting the interest of children and encouraging them to think will enhance the development of children's social and emotional skills as well as cognitive skills from early childhood to school age. Finally, children with numerous experiences of voluntary playing and collaborative activities in kindergarten tend to acquire high levels of social and emotional skills.
Thank you for your attention.

She has been engaged in the surveillance study on the awareness and actual conditions of children from early childhood to senior high school, parents, and teachers focusing on the domains of early childhood development; the developmental study on children's "attitudes of learning to learn"; and the study on children and digital media. Her past major studies and publications include "Questionnaire on Daily Life of Children in Japan," "Survey of Fathers' Views on Childrearing in Japan," and "Basic Survey on Pregnancy, Childbirth, and Child Raising."
She served as a member of the "Review Council for the Development of R&D Facilities for Early Childhood Education" by the Ministry of Education, Culture, Sports, Science and Technology (2015), has conducted collaborative work on "Education and Social Progress Project Research" with OECD, and is currently a member of the Family Education Committee in Mie Prefecture (2019-).
Related Articles:
Latest Posts in this Category:
Search