Quality of Life (QOL) of Children 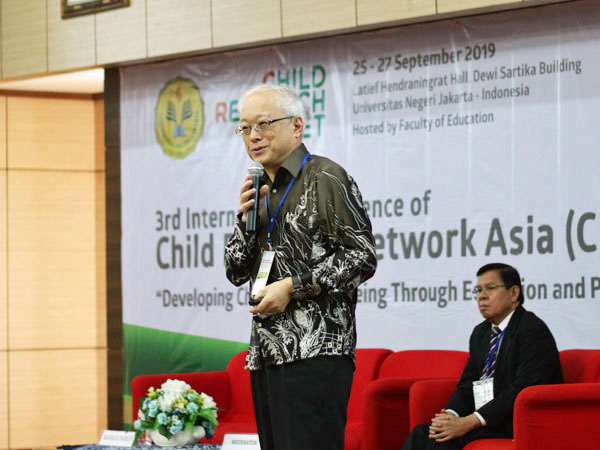 My talk is on Quality of Life of children (QOL), which is quite similar to well-being. Many of you are educators and are concerned with kindergarten structure, the quality of the teaching staff and the curriculum. These are all very important factors of course, but they do not always result in a satisfactory outcome. I think a reliable indicator is QOL, which can also be expressed as children's outcome and there are various ways to evaluate this. These include cognitive and linguistic development and social and emotional skills, among others. This afternoon, there will be a paper from Benesse about the assessment and survey on social and emotional skills of children in Asian countries. However, these are objective measures, created from an adult viewpoint. If we take a subjective measure like QOL, we can ascertain how children feel. It is important that children are happy, and later Professor Chang from Taiwan will talk about the importance of play in that respect. To assess QOL we must consider general satisfaction with life, which includes health, family, education and employment, wealth, safety, security to freedom, religious beliefs and the environment. As a doctor I am concerned with health, which is a state of complete physical, mental and social well-being and not merely the absence of disease or infirmity. This means that we need to think about improving life in general rather than simply concentrating on medical treatment. One of the most robust indicators of QOL is the infant mortality rate or IMR which is a measure of how many infants per 1,000 will pass away before their first birthday. For Japan in the 20th century, this figure averaged 160/1,000 which is about one in seven. However, more recent figures indicate that it is now about 3/1,000 which is a major improvement, but it is not the whole story. 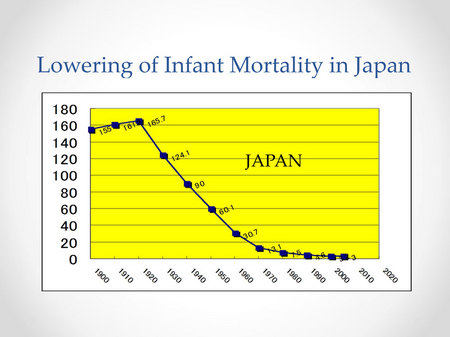 Lack of physical activity due to modern living standards with labor-saving technology will bring about an overall decline in health status. Another concern is the decline in social skills, possibly caused by excessive use of electronic games. There has also been an increase in developmental disabilities such as autism, ADHD and other learning disorders, now about 7-8%. Further issues include the lack of self-esteem. The education system must not only seek for higher academic achievement, it must strive for improved mental, emotional, even spiritual health for our children. QOL assessment must take these things into account.

How Can We Improve QOL in Children?

How can we improve QOL in children? By assessing the children's QOL, we can use it as an indicator for improving economic status. So, in the field of early childhood education, the quality of education and care is one major topic. How can we assess effectiveness and efficiency and quality of early childhood education and care? These measures can be very useful to judge whether what you are doing at kindergarten or elementary school is actually good enough. Economic status is an important topic particularly in a so-called wealthy country like Japan where surprisingly one in six (16%) children are actually living in poverty. A recent survey showed that most of these were in single-parent families. The standard of parenting is also a major issue as neglect and child abuse are causing increasing concern in a lot of pre-school institutions. After pre-school, the conditions surrounding transfer to elementary school are another aspect affecting well-being. The change from a mainly play environment to one where study is foremost can be traumatic for the unprepared.

Now I would like to consider some prior studies done on children's QOL. One of these, involving more than 7,000 children aged 12-13 found there were significant correlations between breakfast intake, late sleep time, long TV viewing, insufficient physical activity and low QOL. Another study, in Norway, involving 1,800 children aged 8-16 years, used two types of QOL scale, IKC and KINDL®. It showed that parent-rated QOL does not change even as the children grow older, but self-rated QOL tends to decline somewhat, showing an important difference between subjective and objective measurements. Another Nordic study found that downgrading of QOL is more prevalent among girls than boys, possibly because in this age group they are more sensitive to their social status. As my specialty is developmental disabilities, I will now talk about the relationship between attention problems and QOL. Such disabilities affect almost 7% of Japanese children and almost half of them have ADHD. An analysis of them found that parent-rated QOL scores of ADHD children were higher than the self-rated scores, reflecting a difference in self-confidence.

Now I want to move onto self-esteem, which is confidence in and satisfaction in oneself. It leads to an individual's overall subjective emotional evaluation of his/her own worth. To use another expression, it is self-perception and there is a close relationship between this and QOL. In KINDL®, six domains are incorporated in the holistic QOL: physical, emotional, self-esteem, family, friends, and kindergarten.

Self-esteem is a part of QOL. These six domains are related but there are some differences. 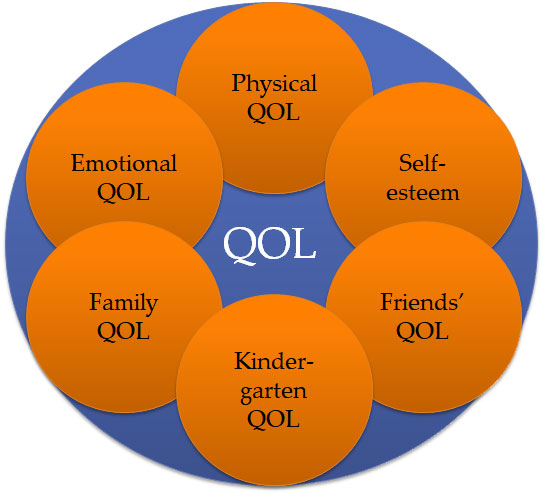 Figure 2 Self-Esteem, as a part of QOL

There are four very simple questions, which parents or a grown up child can use to measure self-esteem.

One important factor in self-esteem is the approval of others; for a baby it is the parents and later in life it is the teacher who does this. Gender difference also has an effect on self-esteem, for boys it is often physical prowess which is important, for girls it may be tallness or clothing quality. By the time a child has reached adolescence, they tend to rely on their own judgment, rather than the kind of praise they received as children. A study by the Benesse Educational Research and Development Institute(BERD) showed that Japanese high school students tend to have low self-esteem due to the feeling test scores are a reflection of their worth. For adults, there is the well-known Rosenberg scale for measuring self-esteem. There are 10 simple questions to be answered on a four-point scale "Strongly Agree," "Agree," "Disagree" or "Strongly Disagree."

Using these questions, on an international comparison scale, Schmitt, DP & Allik, J. stated the level of self-esteem in adults in 53 countries. In Serbia, Israel, Turkey, Estonia, and Mexico, self-esteem tends to be high. In Bangladesh and Japan adults come out as having fairly low self-esteem, which probably explains why their children tend to be the same.

Another study I carried out compared Japan, Vietnam and Thailand. It was very complicated, taking into consideration factors such as socio-economic status, parent's occupation, environment, parental stress, marital status and type of household. For the children, health status, body weight, and height, sleep habits, media exposure, game, Internet usage, TV viewing, reading, and playing outside were considered. Caregiver and parental QOL were also included and regression statistical analysis was used to examine the relationship between these factors. Broadly speaking it was found that inattention, as happens with ADHD, will have a negative effect on a child's self-esteem. Moreover, if the parents are happy, with high self-esteem, the child will also have higher QOL. Sufficient sleep time is also very important for self-esteem. Positive parenting, encouraging play and pro-social behavior plays a very important role. As teachers, particularly at kindergarten level, you can also play an important part in elevating QOL and self-esteem before children enter elementary school. I am a doctor and I believe we should work together to improve the holistic development of children and set them on the road to being confident adult citizens as part of the Sustainable Development Goals, up to 2030 and beyond.

Q1: Do you have a simplification of questions? I saw you had four questions to measure self-esteem. Can you break that down for teachers of early childhood education so that they can observe which student is good in emotional and respecting or others?

A1: There are several types of questions to QOL. Four questions for self-esteem are part of 24 questions. You can find more information online, but educators in Indonesia might even have their own version generated for Indonesian children to measure their QOL.


Q2: It was surprising to listen to the presentation, as Indonesians look up to Japanese childcare and education to study from it. How to increase self-esteem in elementary school children whose self-esteem is decreasing...have you found a way to solve this problem?

A2: Communication between parents and teachers is very important. Parents and teachers may talk about QOL, the significance of sleeping time, and academic achievement scores. Many teachers put importance on academic scores to encourage kids to study and catch up. They also inform parents about these scores as a result. Some parents may think scores are very important, but punishment based on it make things worse. Please bear in mind that the development of social emotional skills is more important than the development through academic scores.


Q3: Parents are the prime influence on children. How can we help children with working parents grow happy and well-developed? Some children go to bed very late and have to wake up early in such families. What should parents do to increase children's self-esteem at home?

A3: It is a national movement in Japan to let kids sleep longer. Daycare centers and kindergartens are aware of the importance of sleep hours. In Japan there are two obstacles:
One is; Many children like to play games late at night. Even with punishment from parents, they want to play longer, which reduces sleeping hours. The second obstacle is; Home assignments are sometimes asked by teachers. This can also keep a child awake late at night.
In general, the way to dissuade parents is to give scientific information on the effect of sleeping hours to development. The role of teachers is to tell the parents that their child needs more sleep, if they see children get very sleepy from early hours in the morning. To inform parents the importance of sleep time is the first step to stop the bad habit, which is also important for the development of social and emotional skills.

Thank you very much for your questions.

Yoichi Sakakihara
M.D., Ph.D., Professor Emeritus, Ochanomizu University; Director of Child Research Net, Executive Advisor of Benesse Educational Research and Development Institute (BERD), President of Japanese Society of Child Science. Specializes in pediatric neurology, developmental neurology, in particular, treatment of Attention Deficit Hyperactivity Disorder (ADHD), Asperger's syndrome and other developmental disorders, and neuroscience. Born in 1951. Graduated from the Faculty of Medicine, the University of Tokyo in 1976 and taught as an instructor in the Department of the Pediatrics before working with Ochanomizu University.
Related Articles:
Latest Posts in this Category:
Search