[Japan/China] The Impact of COVID-19 on the Living Environment and QOL of Parents and Children: A Comparative Study between China and Japan in 2020 - Projects
中文
日本語

TOP > Projects > ECEC around the World > [Japan/China] The Impact of COVID-19 on the Living Environment and QOL of Parents and Children: A Comparative Study between China and Japan in 2020

[Japan/China] The Impact of COVID-19 on the Living Environment and QOL of Parents and Children: A Comparative Study between China and Japan in 2020

This article is a brief report about the effects of the COVID-19 pandemic in Japan and in China on the living environment of families with young children and the well-being of mothers and young children. It is based on the results of the ‘Study on Changes in Pregnancy and Child-rearing Environments due to the Spread of COVID-19: A Japan-China Comparison,’ conducted by the research institute to which the author is affiliated.

The spread of COVID-19 from 2020 has led to major changes in the environment surrounding young children, both inside and outside the home. It is also likely to have a significant impact on the physical and mental health of young children and their parents. The purpose of this study is to investigate the living conditions of families with young children, the mental state of parents and children, and changes in quality of life (QOL) during the period of voluntary restraint from going out. It also looks at the subsequent "new lifestyle" following the spread of COVID-19 infection, and to understand the needs of families with young children under such special conditions. In addition, although several surveys on the impact of COVID-19 on children and their parents have already been conducted in Japan, there are as yet few international comparison studies. Thus, another purpose of our study was to compare the impact of COVID-19 on families with young children in both Japan and China, taking into account the socio-cultural factors in both countries.

Japanese and Chinese versions of questionnaires were prepared regarding the life of parents and children. The questions were on troubles and worries, and QOL of mothers and children during the period of soft lockdown practicing "self-restraint" due to the spread of COVID-19 (April-May 2020 in Japan and January-February 2020 in China) and at present (at the time of the survey). Regarding Japan, from September to October 2020 a web-based questionnaire was sent to the registrants of the "Ibaraki Cohort Study" (a longitudinal study in progress since 2017 with the cooperation of mothers with young children living in Ibaraki City, Osaka). A total of 77 mothers of children aged 0-2 years (the youngest child) completed this survey (COVID-19-related survey for mothers with young children) effectively with their consent. As for China, with the cooperation of a kindergarten in Shanghai, parents with kindergarten children were asked to participate in the web-based questionnaire in November 2020. A total of 560 mothers of kindergarten children (3-6 years old) responded with their consent.

Problems and worries during the self-restraint period

Table1. The problems and worries perceived by mothers during the self-restraint period due to the COVID-19 pandemic (multiple answer questions)

In other words, not being able to go out or play outside was a concern in both countries, but more mothers in Japan felt that it interfered with their social relationships. On the other hand, the Chinese mothers were more concerned about the negative effects on their children due to prolonged use of electronic devices. This is probably related to the fact that the subject children surveyed in Japan were between 0 and 2 years old, while in China the subject children surveyed were between 3 and 6 years old. Mothers probably need more support from their relatives and friends when their children are between 0 and 2 years old. Normally, mothers would be able to get not only physical support but also emotional support by interacting with their children's grandparents and other relatives, as well as with nearby "mom friends." However, during the period of "self-restraint," mothers were not able to meet with the people around them, making it difficult for them to obtain support, which is why about 90% of respondents in Japan felt that it was a matter of concern. In China, since a lot of families live with their grandparents when their children are young, it is thought that they were able to easily interact with their relatives even during the self-restraint period. Accordingly, fewer mothers chose "I could not meet my relatives and friends" (30%) than in Japan. On the other hand, the implementation of online classes and the use of educational applications became more popular in China during the self-restraint period. The result of this survey indicates that the frequency of use of these digital applications by children aged 3-6 was higher during the self-restraint period than usual, and their mothers felt worried about the long-time use of them.

Changes in children's behavior under the influence of COVID-19

Regarding the question, 'Did you notice any changes in your child's behavior due to the COVID-19 pandemic?,' about 13% of mothers in Japan and 15% of mothers in China answered "yes" ("a little different" + "quite different") There was no statistically significant difference between the results of the two countries. When asked about the specific changes they felt (multiple choice question), numerous respondents in Japan answered that their children were more "relaxed" (19.23%), "energetic" (16.67%), and "laughs a lot" (14.10%) as positive aspects. On the negative side, numerous respondents selected that they seemed more "bored" (15.38%), "irritable" (12.82%), and "dissatisfied" (7.69%). In China, mothers described the positive reactions of their children as being more "energetic" (8.93%), "relaxed" (8.93%), and "vigorous" (8.21%) than usual, while regarding the negative reactions of their children they selected being more "bored" (11.79%), "irritable" (3.93%), and "sensitive" (2.50%) (Table 2).

Perhaps the children in both countries felt more relaxed and energetic than usual due to spending more time at home, but at the same time they felt more bored and stressful due to restrictions imposed during the "self-restraint" period.

Regarding changes in mothers' own behavior toward their children, about 23% of the mothers in Japan and 18% of the mothers in China felt that their behavior had changed ("a little different" + "a lot different" total). There is no statistical difference between Japan and China, and it is thought that about 20% of mothers in both Japan and China were aware of the changes in their own behavior. The changes the Japanese mothers felt most in their behavior toward their children were the increased time to 'play with (their) child(ren)' (25.64%), more 'skinship' (19.23%), and 'get angry' more frequently (16.67%). In China, mothers found themselves spending more time 'play(ing) with child(ren)' (14.64%), 'talk(ing) with child(ren)' (12.14%), and 'listen(ing) to child(ren)' (9.82%) (Table 3).

Table 3. Changes in mothers' own behavior toward their children 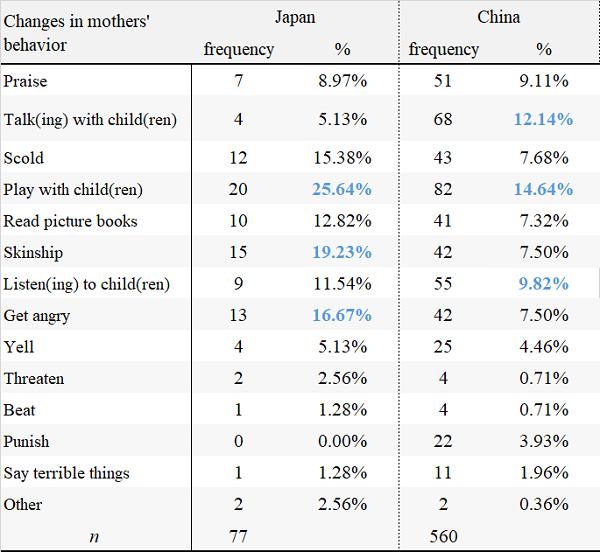 In other words, in both countries, the mothers' involvement with their children increased during the period of "self-restraint." Looking at the specifics of the increased involvement with children, there were some positive behavioral aspects (e.g., playing together, listening to children, talking with them), but there was also an increase in negative emotional behavior (e.g., scolding, getting angry, and yelling, etc.). Regarding the negative behavior, it is likely that the increase in time spent with children brought about situations where the mother felt it necessary to discipline the child, but it may also be related to the fact that the mother's own QOL had deteriorated, leaving her in a stressful situation.

Table 4. Changes in QOL of parents and children during and after self-restraint 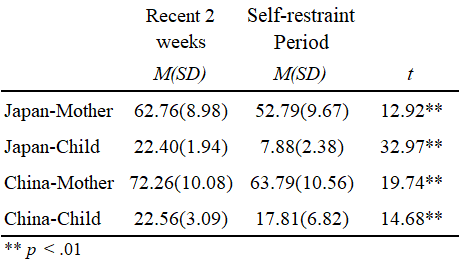 Although Japan and China have different socio-cultural backgrounds and the two governments have taken different measures against the spread of COVID-19, they showed similar trends in the significant decline in the QOL of parents and children during the self-restraint period. Furthermore, the results of multiple regression analysis showed that physical environmental changes, such as changes in the family's finances or increase in family troubles during the self-restraint period, did not have any direct impact on the children's QOL. However, it was demonstrated in both countries that the mother's QOL directly affects the child's QOL. This is thought to be common across cultures.

According to the results stated above, we think that both in Japan and in China, the QOL of mothers is the key to the physical and mental health of her child. Even in stressful situations such as the COVID-19 pandemic, if the mother maintains good physical and mental conditions, her child(ren) probably receive less negative influence. It suggests that improving the well-being of mothers will improve the quality of the mother-child relationship, which in turn will improve the QOL of children.

Note: This article is based on a presentation given by the author at the 32nd Annual Meeting of the Japanese Society of Developmental Psychology.

Profile:
Sun Yi, Ph.D
Assistant Professor, Asia-Japan Research Institute, Ritsumeikan University
Dr. Sun received her Ph.D in psychology from Ochanomizu University, and is now working at Ritsumeikan University. She has led or participated in several international comparative projects on parenting environment in early childhood. One of the conducting projects is the ‘Ibaraki Cohort Study’, a long-term longitudinal study on the well-being of mothers and development of young children from pregnancy through to childbirth and preschool.
Related Articles:
Latest Posts in this Category:
Search