TOP > Projects > ECEC around the World > [Japan] Use of AI Robots in ECEC: Young Children's Literacy and Cognition Towards Interactive AI Robots (1)

[Japan] Use of AI Robots in ECEC: Young Children's Literacy and Cognition Towards Interactive AI Robots (1)

Together with the advancement of artificial intelligence (AI) technologies, AI-based media such as communication-based AI devices and ICT devices are becoming more prevalent in our daily lives. In particular, the use of humanoid AI robots in early childhood education and care (ECEC) can influence the development of children’s media literacy (cognitive skills) as well as social and emotional skills (non-cognitive skills). This article is composed of two parts. The first part explains our research on the use of a humanoid AI robot, “RoBoHoN,” at a kindergarten. We observed children’s interaction with the RoBoHoN during free activity time (Study 1). In the second part, we asked some questions to children, who communicated with the RoBoHoN, to find out how they felt towards the robot (Study 2). Based on these results, we will discuss children’s literacy and cognition towards the AI robot.

A great number of researchers are carrying out studies on infants' cognition towards robots and the effects of human-robot interaction. For example, a lot of quasi-experimental basic studies have been conducted in a laboratory environment to capture infants' ability to differentiate non-living things from living things, interpersonal cognition, emotion perception, and so on (e.g., Moriguchi, Kanda, Ishiguro, & Itakura, 2010; Tanaka 2013). With the experimental control of the above factors, more fundamental knowledge can be acquired regarding the effects of human-robot interaction.

Together with the advancement of such a leading-edge research field, communication-based AI devices and ICT devices are becoming prevalent in our daily lives. Furthermore, the global outbreak of COVID-19 in 2020 has made us minimize direct human-to-human interaction as protection from the virus. As a result, the effectiveness of these devices has become the focus of attention.

Previously, AI devices and ICT devices were mainly used for cognitive aspects such as providing device-related operation skills/information and supporting information-processing operations. However, one of the characteristics of communication-based AI devices that has been becoming popular is the ability to perform functions by voice command. In other words, interaction with such AI devices has become closer to human communication.

Use of AI Robots in Early Childhood Education

For young children, daily interaction with AI-based media may affect the development of their media literacy (cognitive skills: the ability to think, interest in numbers/figures/letters, verbal communications, etc.) as well as social and emotional skills (non-cognitive skills: cooperativeness, involvement in social life, etc.). In particular, a humanoid robot with human-like qualities is more likely to be recognized as a human-like character by young children than other mobile AI devices/speakers. Therefore, humanoid AI robots can be considered effective for facilitating communication with young children.

Considering the above trends and based on our assumption that robots will become prevalent in our daily lives in the near future, we have been conducting research on "Human-Robot Interaction." We seek to find out the potential roles of AI robots in the field of early childhood education and care, focusing on the adaptation process of such human-robot interaction for young children. An applied research study was conducted based on the findings of the previous basic studies as mentioned above. We also need to evaluate the process and development of communication with AI robots or the significance and effects of AI robots, from the standpoint of pedagogy and childcare studies.

This article presents our research study conducted at a kindergarten, focusing on the use of a humanoid AI robot, "RoBoHoN*." The research is composed of two parts, "Study 1" and "Study 2." In Study 1, the RoBoHoN was placed at the kindergarten and children's interaction was observed with the robot during free activity time. Then, the children's conversation data was collected and analyzed. In Study 2, we asked some questions to children, who communicated with the RoBoHoN, to find out how they felt toward the robot. Based on our research findings, we will discuss the characteristics of children's literacy and cognition towards such a new AI agent within the context of early childhood education.

Study 1 will be introduced in the first part of this article and Study 2 in the second part. Finally, a comprehensive summary of our discussion will be provided, based on the research findings.

"RoBoHoN" (see the photo below) is a small humanoid-shaped mobile robot, developed by Sharp Corporation in 2016. The robot stands 19.5cm tall and weighs about 390g, supported by operating systems for Android smartphones and cloud-based artificial intelligence (AI). Its communicative functions include responding to the owner's voice, answering questions, and performing actions according to voice command. The robot has a learning function, such as remembering words through conversations. It can also make highly human-like movements, such as nodding, making expressive gestures, dancing according to conversations, walking on its two legs, sitting down, and standing up. For further information on its features and functions, please visit the RoBoHoN website.

Furthermore, it is possible to make a program for the conversations and actions of the RoBoHoN using programing applications such as "Scratch" and "Robrick." These applications are easy to use, even for young children. Therefore, some educational institutions introduced the RoBoHoN to their elementary school programming curriculum (e.g., Nagaoka City Board of Education in Niigata Prefecture). 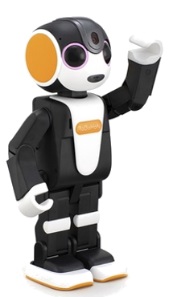 In Study 1, the RoBoHoN was placed at a kindergarten. First, children's interaction/communication was observed with RoBoHoN and kindergarten teachers during free activity time. Then, we collected their conversation data and analyzed the characteristics of such interaction. The experiment of RoBoHoN at the kindergarten was conducted in two stages.

In the first stage, RoBoHoN was placed in the teachers' lounge to allow both children and kindergarten teachers to get used to the robot. The teachers were also provided with a written list of words that RoBoHoN could understand. They tried RoBoHoN's various functions, considering how children can get used to using such functions. When the children visited the teachers' lounge and found the RoBoHoN on the desk, they could freely touch it. In the second stage, the teachers were asked to use the RoBoHoN in a class of five-year-old children for 15 minutes per day during free activity time for one week. Under the supervision of the classroom teacher, children played with it freely.

At the beginning of the first stage, teachers encouraged children to interact with the RoBoHoN, by saying, for example, "Let's say hello to the robot" or "This is RoBoHoN. You can talk to it." The children gradually started talking to the RoBoHoN freely. Children aged three or four seemed to feel that RoBoHoN was an actual human being and seriously interacted with it. For example, when one child observed RoBoHoN's battery charge was running down, he asked the teacher, "Is RoBoHoN going to die after the battery runs out?" Another child asked, "Will it feel scared at night when the lights go out here?" In contrast, children aged five or six seemed to realize that RoBoHoN was a robot. For example, when one child talked to RoBoHoN, and RoBoHoN responded, he murmured, "It understands my words!" Then, he picked it up, checked the back display, and pushed a button on the head, trying to find a speaking function. This behavior indicates that the child understood how devices have mechanisms that make them work.

Meanwhile, some children treated the RoBoHoN as a human being. For example, when they asked a question to RoBoHoN and RoBoHoN answered, they said to RoBoHoN, "Thank you." However, it seems that they spoke to RoBoHoN in such a way, knowing that it was a toy machine.

At the second stage (children's interaction in the classroom), the children showed a strong interest in RoBoHoN, showing various responses such as talking to it and asking questions. The kindergarten teachers were asked not to interfere with the children's interaction between RoBoHoN unless there were issues to take care of. Therefore, the children learned how to use the robot through trial and error and gradually created their own rules and conditions to play with it. For example, in the first half of the trial week, the children treated the RoBoHoN as a human being, looking at the response of RoBoHoN and saying, "Maybe it doesn't understand this word," "Maybe it is getting tired," or "We need to talk to it one at a time, otherwise it will be confused." Then, in the second half of the week, children already understood and used words that were more likely to get a response from the RoBoHoN. It was also confirmed that more and more girls commented, "How cute!" and "I love it!" to RoBoHoN during the course of the study. This behavior indicates children's attempts to get its attention and responses from RoBoHoN, in competition with their peers surrounding the robot.

In the second part, the details of Study 2 will be explained, where we asked questions to children, who communicated with the RoBoHoN, to find out how they felt towards the robot. Then, a comprehensive summary of our discussion will be provided, based on the findings.

(Continue to [Japan] Use of AI Robots in Early Childhood Education and Care: Young Children's Literacy and Cognition Towards Interactive AI Robots (2))

Supplementary Note:
The research study discussed in this article is part of the research project (Basic Research B-18H01064; representative: Hiroshi Hotta), which received the Grants-in-Aid for Scientific Research from the Japan Society for the Promotion of Science.

*Note:
About AI robots: AI technologies are rapidly developing with various definitions and scopes, ranging from AGI (artificial general intelligence) to those incorporating other related technologies. The RoBoHoN used in our research is categorized as a humanoid robot with AI-based communication functions.

Mr. Morita currently serves as Professor (elementary education) at the College of International Professional Development, Kansai Gaidai University. He earned his Ph.D. in human sciences at the Graduate School of Human Sciences, Osaka University. He specializes mainly in elementary education, media education, and developmental psychology. His research focus is on the impact of media usage in early childhood education using various approaches. He is currently working on several studies receiving research grants from the Japan Society for the Promotion of Science (JSPS), including those with the themes of “Media Usage Aiming to Introduce Global Education for Young Children” and “Effects of Introducing the Administrative Information System for Kindergarten.” His publication includes “Medhia sinrigaku nyuumon [Introduction of Media Psychology]” (co-author; Gakubunsha), “Akatyan kara manabu 'nyuuzi hoiku' no zissenryoku [Practical Skills That Can be Obtained from Actual Child Care for Infants]” (co-author; HOIKUSHA Publishers Co., Ltd.), and a series of “Yoku wakaru! Kyousyoku ekusasaizu [Easy to Understand! Teaching Exercise]” books (editorial supervisor and co-author/editor; Minerva Shobo).


* Job titles and affiliations are as of publication time.