Guided play is an effective approach to facilitate young learners' competencies and skills in accordance with an adult's role as a co-player. This research aimed to explore the effects of managing activities using guided play and outdoor loose parts to promote cooperative play behavior for kindergarteners in one Thailand public school. Samples were collected from 48 children aged 5-6 years old, divided equally into two groups, each made up of a control group and an experimental group. The teaching routine consists of four steps, which were 1) preparation, 2) exploring materials, 3) playing together, and 4) tidying up materials. 45 minutes for each session under 10 themes of outdoor play with loose parts were managed. The research tool was the assessment form of collaborative play behavior, which was analyzed using mean, standard deviation, and match by a paired t-test. Findings revealed that guided play with outdoor loose parts was an effective teaching method to promote collaborative play behavior. Moreover, creativity and risk management behavior were also raised as key factors during the experiment.

Focusing on academic skills and promoting 3-5 year olds to perform reading, writing, and calculating is the opposite direction of nurturing 21st Century skills for children. Soft skills, especially social skills, are the base for young children to build on for future success. As young children are active learners, play is their vehicle for exploring the world around them. Moreover, children aged 5-6 years should be encouraged to engage in collaborative play in order to be ready for elementary school, and, as mentioned by Scott and Cogburn (2020), it is one of the essential skills for 21st Century citizens. Therefore, an adult should be a play facilitator to expedite the expected outcome for young children during play, so-called guided play.

Guided play is an effective method for supporting young children's desired learning outcomes through play, in which children are initiators under adult facilitation. Weisberg et al. (2016) describe the adult roles, which are setting up the environment, materials, and using open-ended questions as well as being an observer or co-player. This is in addition to the fact that this type of play seems to be more effective than free play.

Collaborative play is playing and cooperating as a team to achieve common objectives, and is an indicator of social development in children between the ages of 5 and 6. At these ages, they demonstrate social play by assigning roles, planning, and cooperating as a team (Shim et al., 2001). Collaborative play behavior includes sharing, negotiating, and following the rules (Mawson, 2010; Scott, 2020). In order to promote collaborative play behavior, kindergarten teachers need to create and nurture an environment that enhances collaborative play by setting up the rules, monitoring children's play, planning, providing resources, examining equipment, and playing with children (Greenman, 1988). Moreover, outdoor resources should be more flexible so that young children can put them in place and move them by themselves (Mawson, 2009).

Several recent studies demonstrate the effects of loose parts on the promotion of collaborative play. Findings by Flannigan and Dietze (2017) show that young children gain more positive social behavior, such as expressing more complexity in play using both verbal and non-verbal expressions. They also demonstrated interaction and cooperation when children play outdoors with loose parts. One suggestion arising from this study was to extend the opportunity for young children to play outdoors with loose parts more frequently.

Loose parts are unstructured materials which can be moved, designed, arranged, and separated in a variety of ways (Nicholson, 1971). It is based on four principles, which are 1) considering the context of where children are, 2) letting the children be part of the process, 3) integrating the interdisciplinary concept, and 4) giving information to stakeholders.

In this study, six types of materials were used: natural-based, wood reused, plastic, metal, fabric/ribbon, and packaging. Fragile materials like glass and ceramics were not included due to safety considerations.

This study aimed to explore the effects of managing guided play activities with outdoor loose parts towards collaborative play behavior of kindergartners in 3 components which were 1) sharing, 2) negotiating, and 3) following the rules. This can be a guideline for kindergarten teachers to enhance collaborative play behavior, work with others, and future academic success of young children.

This research was conducted using a quasi experiment, involving two groups, pre and post test design. Details of the research procedure were as follows:

Samples were taken from 48 kindergartners studying in K3, during the second semester (15 Nov. 2021 to 4 Feb. 2022) of academic year 2021 at one public kindergarten. Drawing lots was the sampling technique used to divide the samples into 2 groups; 24 kindergartners in K.3-1 class were the control group, and 24 in K.3-2 class were the experimental group.

For these target children, 100 lesson plans were developed, 50 of which were for the experimental group and 50 for the control group. The 10 play themes were 1) Fun House 2) Journey into the Big Forest 3) Bridge Building 4) Superheroes 5) Fairy Tales 6) Treasure Hunt 7) Space Adventure 8) Small Creatures in the Big Wood 9) Children's Discovery 10) Amazing Invention. Each play theme lasted for 1 week, thus the experiment lasted for 10 weeks in total.

The researchers developed lesson plans for the experiment group, consisting of 4 steps as follows:
Step 1 Preparation: The teacher arranges an environment for the children according to the play theme, introduces the play theme, and together with the children, sets up ground rules.


Step 2 Exploring materials: Children explore and become familiar with loose parts, then split up into small groups to play together. The teacher observes while they play together and uses open-ended questions to encourage children's brainstorming and goal setting.


Step 3 Playing together: Children initiate and lead their play while the teacher acts as co-player, guide, and asks open-ended questions.


Step 4 Tidying up materials: The teacher gives a signal to stop playing, then children tidy up all equipment and materials, and clean up their bodies. After that, the teacher asks the children to share their comments and feelings from the activities.

A pre-test was conducted 1 week before the experiment. Systematic observation was applied in a sequence of 6 children at a time for 40 mins. For 10 weeks of the experiment, the researcher managed outdoor activities according to the lesson plan for both groups, 5 days a week, 40 mins per day. The post-test was conducted using the same procedure as the pre-test and lasted for 1 week. Data was analyzed by using arithmetic mean, standard deviation, and match paired t-test.

After the experiment, the experimental group had a higher mean score of collaborative play behaviors than those of the control group at a .05 statistically significant level. Considering each aspect of all 3 aspects comprised of sharing, negotiating, and following the rules, they were all higher than before when compared with the control group (Figure 1). 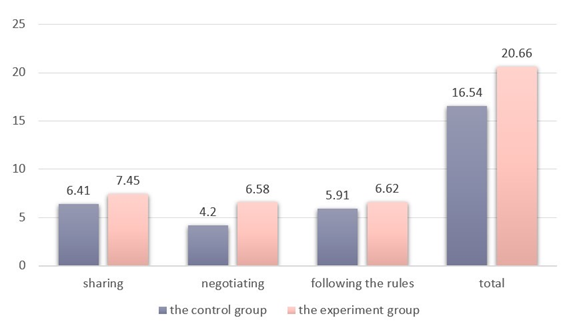 Figure 1. A comparison of mean scores between the control and experimental groups after the experiment

1.Effectiveness of the outdoor loose parts with guided play activity

All four steps of instruction include preparing, exploring materials, playing together, and tidying up materials facilitated collaborative play behaviors. In Step 1, the teacher asks an open-ended question, "What are the rules we should follow during play?". This demonstrates following the rules behavior. In step 2, the teacher asks, "What do you see? What are they called? How can we play with these materials?". This step increased the ability of negotiation. Children have opportunities to share their ideas, listen to others, and make decisions as mentioned by Charlesworth and Lind (2010) who pointed out that while exploring the play materials, they connect their prior experiences with the new experiences, organize information to answer the questions, and brainstorm about goal setting. This cultivates cognitive development. In step 3, the teacher acted as co-player and facilitator. The teacher prompts with questions such as "Did you follow the goals that have been set up?" "What did you do?" "How did you help each other?" This step increased the aspect of sharing, as suggested by Svetlova et al. (2010) that through play and working with others, children can cultivate their sharing behavior. According to University of Gothenburg (2010), children's negotiation skill is also increased because when dealing with space, materials, or situations, they have to communicate, negotiate, and compromise with friends within the group or among the group. Finally, the last step (Step 4) of tidying up the materials can promote children's behavior of following the rules.

Playing with loose parts outside the classroom can promote collaborative play behavior due to the size of the loose parts. Outdoor loose parts are oversized and heavy when compared to the physical size of a child. They cannot move the materials alone, and they have to brainstorm how to play with them. Communication, negotiation, taking turns, being a leader and follower, as well as collaborative play skills are developed through these activities. As mentioned by Casey and Robertson (2019), loose parts are open-ended materials that invite children to explore, touch, move, combine, and redesign. It promotes social behavior, especially communication skills, as well as confidence, self-regulation, and problem solving. Moreover, outdoor loose parts seem to be challenging and adventurous.

2.Creativity and risk management behaviors have increased when playing with outdoor loose parts


Creative thinking behaviors such as the courage to think, taking risks, accepting challenges, and confidence are found during play with outdoor loose parts, i.e., children pick up an unfamiliar material or instrument; they create constructions they have never done before; they know what to do and want; they also offer themselves to be part of the invented product to test the durability; they conduct trial and error and learn from their mistakes. All of these behaviors correspond to the framework of creative thinking, which is comprised of exploration, involvement and pleasure, and perseverance (Robson & Rowe, 2012).


As mentioned by Casey and Robertson (2019), every child loves to play with outdoor loose parts due to pleasant and challenges. This is an opportunity to learn risk evaluation and management. During the experiment, children showed precautionary behaviors i.e., warning their friends to be more careful when playing with sticks or walking on different floor levels, offering to take their hands or parts of their body so their friends can hold his balance.

Teachers should prepare themselves to be a good facilitator without dominating or guiding children too much. Keep in mind that children are the initiators and have the freedom to play. The primary roles of teachers are to provide appropriate outdoor materials and to create a positive atmosphere conducive to optimal learning through play. Moreover, open-ended questions should be asked according to each step of learning.

For future studies, loose parts outdoors with guided play can be applied with children with challenging behaviors and to study the outcomes related to risk management behaviors.

An Associate Professor in the Early Childhood Education Division, Department of Curriculum and Instruction, Faculty of Eduation, Chulalongkorn University. Her research interests include assessing young children’s development and learning, inclusive education, social and emotional learning, and aesthetics development for young children. She can be contacted by email at: sasilak.k@chula.ac.th