CRN (Child Research Net) hosted the 9th Child Science Exchange Program in East Asia: the 2nd ECEC Research Conference that was held at Keio University's Mita Campus from October 26 (Saturday) to 27 (Sunday), 2013. During the span of two days, the event focused on Playful Pedagogy and Guided Play, two concepts of early childhood education, to promote discussions on play and learning. The relationship between Play and Learning

Our first day was all about lectures that theoretically considered the relationship between play and learning.

The event started off with a special lecture from our honorary director, Noboru Kobayashi, Professor Emeritus of the University of Tokyo, which illustrated to us how the emotion, joy, is key to a child's healthy physical and mental development, based on case studies from neuroscience studies. 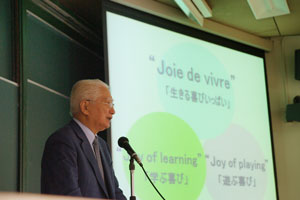 Next, CRN's Director, Yoichi Sakakihara, Professor of the Graduate School of Ochanomizu University, gave a presentation on significance of "Playful Pedagogy." One of the important methods mentioned in implementing Playful Pedagogy is Guided Play. Its features were explained as a method of teaching positioned between the categories of "direct instruction" and "free play" that form early childhood education. Knowing what materials to use is important as caregivers try to create an environment that is in line with educational goals while respecting the child's freedom and independence that will spark his or her natural sense of wonder and curiosity. In addition, he introduced the views of American researchers on Guided Play, regarded as most effective in developmental growth, as well as findings from studies in developmental psychology and neuroscience that provide us with evidence of the rich role of learning in play. In his speech, Director Sakakihara also proposed greater international recognition for traditional childcare practices in Japan and the benefits of implementing play into children's upbringing and urged parents and guardians who were present in the conference to be more confident in their efforts. 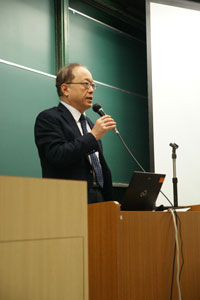 Next, Kiyomi Akita, Professor of the University of Tokyo, and Jiaxiong Zhu, Emeritus Professor of East China Normal University, followed up on Director Sakakihara's presentation and presented their perspectives on the aspirations and aims of early childhood education.

Professor Akita emphasized the importance of incorporating play into early childhood education. She started off by defining the role of the guardian in Guided Play as "being aware of the educational elements that are present for the children while the children are in play." Based on that, she spoke of "guardians being required to understand how to deal with each child individually and to decide educational goals so that a variety of support and management are on hand." She also highlighted the significance of creating environments and activities that are engaging for children. She further appealed that "those who support children's play should also value playfulness in themselves." 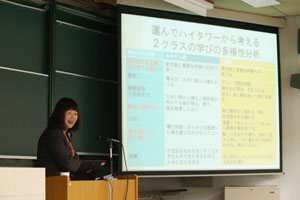 Professor Zhu also talked about how creating a balance between play and learning is indispensable for a child's healthy development. The importance of Guided Play was also emphasized. Using building blocks as an example, Professor Zhu stated that in many cases when we compare a child playing alone with one playing with a guardian, the latter builds better and this in turn helps their sense of accomplishment and awareness. In addition, he urged guardians to constantly think of how, when and what to use in order to strike a balance between giving children independence and guidance in play. 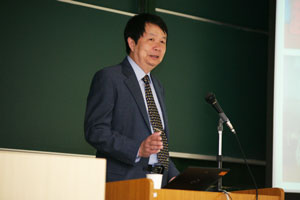 During the two days, besides the theories to which we were introduced, we also learned ways to apply them.

On the first day, the last to take the rostrum was Shin-Tsung Chang, Professor of the National Taipei University of Education, and he introduced a new term that he created himself, "edu-tainment," by merging the two words, "education" and "entertainment." He explained the importance of play space and design in playthings or learning tools in creating learning-intended play and recommended interactive exhibitions in museums that engage touch or "parent-child centers" that encourage play between parents and children. Professor Chang also carried out a mini workshop that showed the participants how to fold a moving origami bird to emphasize that "in play, what is important is that we motivate children's creativity and guide them to be inventive and innovative." 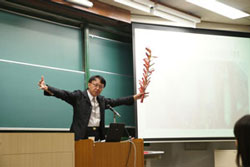 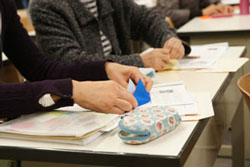 On the second day, we had the honor of hearing from Nobuyuki Ueda, Professor of Doshisha Women's College of Liberal Arts, an advocate of Playful Learning, who defined it not as "having fun learning" but as creating "a fun environment that is rich with learning opportunities." Using images of several workshops, Professor Ueda showed how to create such environments. He illustrated that children need more excitement in firsthand learning experience. He also explained Playful Learning by providing examples of coordinated activities that call for using our hands to make things, learning through human interaction, and in-depth learning that focuses passion on a specific objective. Current Issues with the Early Childhood Education in East Asia

On the second day of the symposium "On the Scene From East Asia," three researchers from China, Taiwan and Japan gave us insights into the current early childhood education scene in the respective countries and the concomitant challenges. 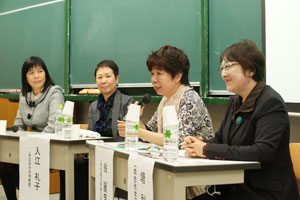 According to Nianli Zhou, Assistant Professor of East China Normal University, there is much work to be done regarding the social development of Chinese children today. Professor Zhou further explained, based on data from neuroscience, that such issues will require widely propagating the practices of Guided Play while revising the current trend of Direct Instruction in early childhood education.

Kindergartens and day-care centers in Taiwan were unified in January 2012 and are now known as "pre-schools." Leefong Wong, Professor of the National Taipei University of Education, further explained that these centers must meet certain government requirements that ensure the standards of their educational and reading materials, both in quantity and quality. These centers facilitate reading sessions between guardians and their children, friendly discussion groups for caregivers and other guardian-oriented activities. On the other hand, Professor Weng added that because caregivers also tend to direct children's play in many facilities, organizing activities that develop children's self-initiative and diverse capabilities is a challenging issue. 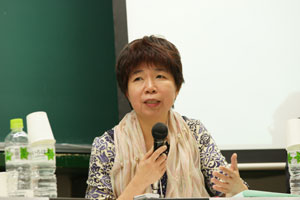 From Japan, Reiko Irie, Professor of Kyoritsu Women's University, talked about the caregivers' mission, which should be to create a childcare environment where children feel they are having fun and want to engage in the same activities again the following day. However, a recent survey of caregivers shows that while many young caregivers are involved in early childhood education, they feel a significant gap between caregiving values and the actual caregiving. In order to address this issue, Professor Irie pointed out that for current caregivers, in-service and on-the-job training at kindergartens, day-care centers or similar facilities should be provided. In addition, students that are currently studying to be caregivers should be exposed to more practical training. Making the Best Out of Guided Play

The second day closed with an overall discussion by Professor Chang, Professor Ueda, Professor Zhu, Professor Zhou and Professor Irie. Without delay, the moderator, Director Sakakihara posed the question, "To take full advantage of the benefits of Guided Play, what are some knowledge and skills required of our caregivers?" to the panel, and the discussion provided an understanding of the differences between China's and Japan's values on play from different angles. Professor Zhu commented that as it is vital to build and manage an emotionally trusting relationship with each child, we must be equipped, not with formal knowledge, but with wisdom that is highly flexible, which he further emphasized is necessary if we closely respond to the needs and feelings of children. The panel agreed with Professor Zhu's comments and this helped us recognize a sense of universality in the discussed early childhood values. 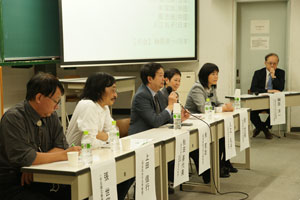 The Q&A session also gave us the opportunity to discuss the implementation of Guided Play with the panel and audience. We especially had an active dialogue regarding Professor Zhou's comments on how to apply "social pretend play"＊ as an educational method to promote social development. 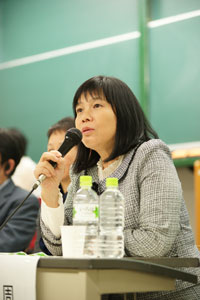 This program ended with great results through the presentations, workshops and symposiums that gave us the opportunity to consider both the theories and practice behind play and learning. During these two days, the presenting researchers caught the attention of the floor with their elaborate analysis and light-hearted humor that sometimes caused laughter from the floor. 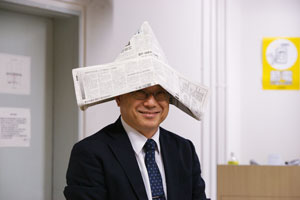 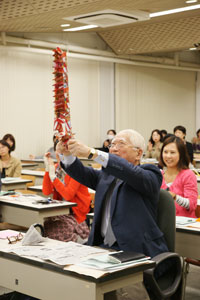 The two days passed quickly. Not only did our panel consist of educators from Japan, China and Taiwan but we had medical scholars, developmental psychologists, designers and many others who enriched the event with their comments and helped highlight important issues surrounding the current situation of play and learning in early childhood education.

＊ This refers to a make-believe game where caregivers use readily available materials like boxes to recreate environments that are easily found or frequently used in public, like hospitals, banks, supermarkets and so forth.
Latest Posts in this Category:
Search