The purpose of this article is to discuss the need for family support from night nurseries based on a field survey conducted by the National Night Childcare Federation. The survey results revealed that more single-mother families, whose children stayed for longer hours at a night nursery until late at night, had special notes regarding their child-rearing. This trend indicates single mothers’ solitude and pressure on child-rearing socially and economically. Therefore, one of the priorities in providing family support is the role of night nurseries as community safety nets for single-mother families who need night childcare services. Night nurseries are expected to ensure safe and healthy living by reducing the parenting burdens and economic hardships experienced by single mothers.

Purpose of this Article (continued from the first part)

The purpose of this article is to discuss the need for family support from night nurseries based on a field survey conducted by the National Night Childcare Federation in FY2019. The survey was conducted after an interval of about ten years from the previous survey.

The questionnaire survey targeted sixty members (certified night-childcare facilities) of the National Night Childcare Federation. The survey's respondents were the directors of those facilities. The survey was conducted in 2019, between May 1 and June 15 and between July 1 and August 15, respectively. The results of the additional new survey items relating to children's conditions were analyzed, focusing on "special notes" regarding concerns about child development and parenting. The comments provided in the free-text field of the questionnaire were also examined, regarding concerns and worries about parents and children using night childcare services. To analyze these open-ended answers, the following methodology was used: we first categorized text data obtained from open-ended questions into small groups according to their topics and conceptualized each topic.

For ethical considerations, the federation president provided verbal explanations for each director of member facilities in advance, including the purpose and methodology of this survey and the treatment of personal data. Accordingly, the federation obtained their consent on voluntary participation and cooperation.


1. Conditions of children with "special notes" 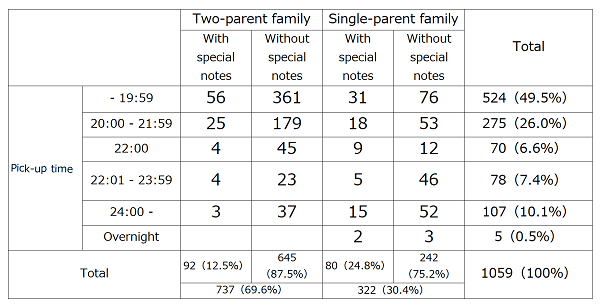 Note 1: Only special notes including pick-up time/family forms were subject to analysis.
Note 2: In the table above, the total number of "special notes" was 177 (excluding responses indicating only the condition such as "on maternity leave," "certified with 'Type 1 Certification,' and "single-parent families"). Five "special notes" which did not refer to family forms (Picked up between 20:00 and 21:59 - two comments on child development; picked up by 22:00 - two comments on child development and parenting, respectively; picked up after 24:00 - one comment on parenting) were excluded from the tally. 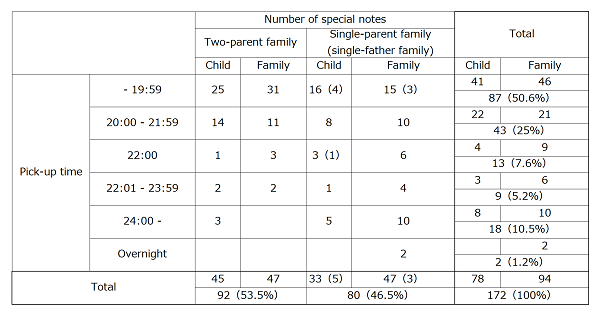 First, we obtained the data of special notes provided in the free-text field of the questionnaire. Then, these text data were categorized into small groups for analysis. Figure 2 shows the categorized comments regarding concerns about child developmentNote 1. In contrast, Figure 3 shows the categorized comments regarding concerns about parenting. At this stage, the topics of special notes referring to a family or child were examined using a certified night-childcare facility. Therefore, in Figures 2 and 3, we included the data of those five special notes, which we removed from our previous analysis (Tables 1 & 2) due to the absence of comments on family forms.


The top answer to the open-ended question "Your concerns about your child's development" was "Developmental disabilities" (29 comments; 35.8%) and the second top answer was "Possibility of developmental disabilities" (17 comments; 21.0%). In comparison, the top answer to the open-ended question "Your concerns about parenting" was "Possibility of child abuse" (32 comments; 33.3%), followed by the answers "Parent's mental/physical illness" (18 comments; 18.8%), "Attitude toward child-rearing" (9 comments; 9.4%), "Mental imbalance" (7 comments; 7.3%), "Complicated family situation" (7 comments; 7.3%), and "Foreign nationality" (7 comments; 7.3%). It should be noted that the answer "Child in need of protection" (5 comments; 5.2%) in Figure 3 refers to a child who cannot receive childcare services due to a lack of vacancies in infant nursing homes in the community, and for whom the government determined to require a certified night-childcare facility to accept, considering the child's family situation. This indicates the actual conditions of night nurseries that support families suffering from child-rearing hardships.


3. Concerns and worries about parents and children who are using night-childcare services

Besides the "Special Notes" column, the respondents were also asked the question, "Do you have any concerns or worries about parents and children who are using night-childcare services?" Among 33 childcare facilities, 29 facilities (87.9%) answered "Yes," three facilities (9.1%) answered "No," and one facility provided no answer. For the respondents answering "Yes," we further provided a free-text field, saying, "Please describe your concerns or worries about parents and children." Table 3 shows the results of our analysis on the text data obtained from this free-text column.

The most common topic was "Parent's ability to raise children" (37.1%), followed by the topics of "Family situation," "Child's stable lifestyle habits," and "Weak parent-child relationship." 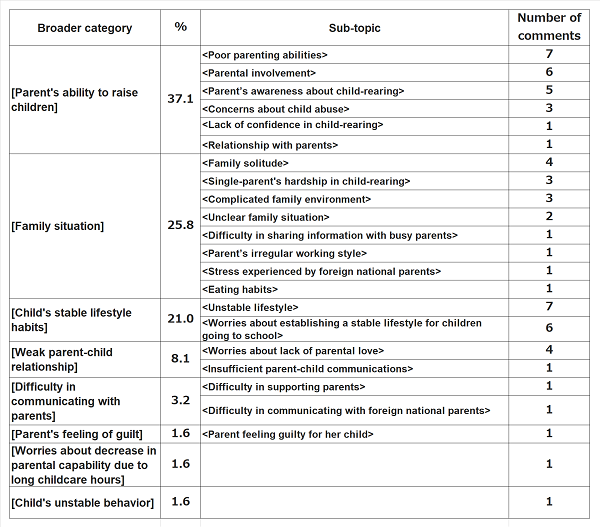 Note: Responses with multiple topics in a single free-text field, were broken down and categorized by topic.


About 50% of children using a certified night-childcare facility leaves the facility by 20:00 (Table 1), and special notes regarding child development/parenting accounted for 14.3% of the collected data.

According to a field survey targeting childcare facilities conducted by the National Childcare Association in 2017, 62.9% of the facilities answered that there were families needing daily life and mental support. Likewise, in our survey targeting night nurseries, 75.8% of the respondents wrote special notes. These results indicate that the need for family support from childcare facilities, in particular night nurseries, is high. At the same time, however, we should consider some facts that the collection rate of this survey was not very high (55%) and there might be some facilities where the respondents hesitated to write special notes.

The most frequently mentioned topic in the free-text field regarding the conditions of parents and children was the issue of "Parent's ability to raise children" (Table 3). Nowadays, concerns about "poor parenting abilities" and poor "parenting involvement" are typical issues found not only in night nurseries but also in all types of childcare facilities. These problems may result from parents' insufficient child-rearing knowledge and the tendency to leave everything to childcare workers.

In contrast, the topics of "Family situation" and "Child's stable lifestyle habits," such as concerns about "Family solitude," "single-parents hardship in child-rearing," and "complicated family environment," are specific to night nurseries. Therefore, it is essential to consider these issues when determining the role of night nurseries in providing family support.

This survey also revealed that the number of children from a single-parent family with "special notes" were almost double the number of those from a two-parent family with "special notes" (Table 1). In addition, it is confirmed that more children from a single-mother family, who stayed at a night-childcare facility until late at night, would be subject to "special notes" (Table 2). These results clearly indicate particular child-rearing hardships suffered by single parents who need to work at night.

For "special notes," more than 50% of the respondents were concerned about child development, such as children's "developmental disabilities" and "possibility of developmental disabilities" (Figure 2). For the issue of parenting, 33.3% of the respondents were worried about the "possibility of child abuse" (Figure 3). The need for family support for the families of foreign nationals is also one of the urgent issues.

There are also numerous comments expressing concern about the "parent's mental/physical illness," as well as their "attitude toward child-rearing," "mental instability," "complicated family situation," and "teenage parents." These comments indicate the actual conditions of single parents facing various child-rearing hardships that they cannot deal with while working at night.

As noted in this survey, not all children and parents needing night-childcare services are experiencing the conditions specified in the "special notes." Nevertheless, the more hours single parents use a night nursery until late at night, the more family support they will need. Considering the topics mentioned in the "special notes" regarding child development and parenting, they indicated the role of night nurseries to provide family support in a deeper and wider manner.

The use of night-childcare services is likely to create a gap between the lifestyles of parents and children. In other words, parents who need to use night-childcare services may have difficulty enjoying family communication with their child due to their social, mental, and physical hardships as single parents working at night. Therefore, parents' instabilities of body and mind could negatively affect the living conditions of their child. Another problem is the difficulty to maintain the normal (daytime) lifestyle habits of children whose parents are working at night. Considering these issues, it is critical for childcare workers to provide appropriate support for each parent in response to their needs and jointly create a healthy living environment for their children.

Under its "Osaka Declaration" in 2008, the National Night Childcare Federation clarified the necessity for improving social work systems. This initiative includes the appointment of senior childcare workers dedicated to family support and establishing a network among social work facilities and local government agencies (Sakurai, 2014).

About ten years have passed since then, and the federation conducted this survey. The survey results further clarified the actual conditions at certified night-childcare facilities that support single mothers who need to work until late at night.

There is also another issue stemming from the poverty of single-parent families, which we will not discuss in this article. The breakdown of childcare fees paid by the users of night-childcare services revealed significant gaps between two surveys conducted in 1996 and 2010. More specifically, the percentage of families who pay the D-rank childcare fee (meaning the highest childcare fee under the household hierarchy classification) was about 54% in 1996 and 48.2% in 2010Note 2. In contrast, single-parent families who pay the A-rank or B-rank childcare fee accounted for 66.3%.

These results suggested that night nurseries play a vital role as a safety net in the community. Night nurseries are required to support single-parent families to nurture their parenting abilities and overcome social isolation due to their poverty as single parents.

For children at the beginning stage of their life and for parents at the beginning stage of their parenting, childcare facilities offer a place to meet and connect with other people in society. Our survey revealed the necessity for further qualitative and quantitative improvements in family support provided by night nurseries. Therefore, it is a fundamental and urgent issue for society to establish a social system that effectively supports parents and children needing night-childcare services. In the end, this is a serious social issue posed by children who need night-childcare services.


ACKNOWLEDGEMENT
First, I would like to express my sincere appreciation to Director Yoshihide Sakai and other members of the National Night Childcare Federation for their support and cooperation in this survey. I also would like to express my sincere gratitude to Professor Keiichi Sakurai, who is the advisor of the federation and jointly prepared the survey report with me.

Supplementary note
All data reported in this article were compiled based on the "2019 survey report on children using night nurseries: the actual conditions of night nurseries under the latest support policies for children and child-rearing families" published by the National Night Childcare Federation. The analysis and reporting of the above survey were conducted jointly by the author and Professor Emeritus Keiichi Sakurai at Bunkyo University, who serves as advisor for the federation.
This article was prepared based on the presentation material used at the 16th Conference of the Japanese Society of Child Science held between October 26 and 27, 2019 at Tokyo Metropolitan University.