With a population of over 250 million people, Indonesia has more than 300 ethnic groups that speak a total of 583 languages. The Indonesian government currently approves six official religions. The slogan of the country is "Unity in Diversity."

In recent years, there has been increasing recognition of the importance of child education in Indonesia, which is rooted in the following two aspects. The first is the importance of early childhood education as the preparatory stage of school education. The Indonesian government considers that a lack of school readiness in young children affects their adaptation and academic performance in elementary school and throughout their education. The second is the increasing awareness of the importance of quality early childhood education among people such as middle-class residents in cities due to the improved living standard of the country. Education is one of the top priorities of the Indonesian government. In Indonesia, the official school age is seven, but elementary schools accept children at the age of six. The school attendance rate is improving every year.

Because more than 90% of government expenditure on education is allocated to elementary schools and above, about 99% of preschool education facilities are privately organized. General kindergartens are supervised by the Ministry of Education and Culture, while Islamic kindergartens are supervised by the Ministry of Religious Affairs. These kindergartens conduct educational activities based on the curriculum determined by each ministry, respectively, and accept children aged between 4 and 6, or even at age of 3 upon request.

I visited two kindergartens in Jakarta this time. Their data are summarized as follows: 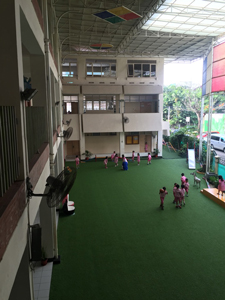 Photo1: A kindergarten yard with a roof

Daily activities are determined by each grade including small group activities. The curriculum of the kindergarten is designed based on the education guidance of the Indonesian government, which helps children develop their daily habits as well as cognitive/non-cognitive skills through "pretending play" and other activities.

Photo 2 shows the craftwork activity of children in their second kindergarten year using scissors. Children freely sat down at either of the two large tables, but unconsciously, girls and boys were seated separately. Photo 3 shows the reading corner in the class room. Some religious picture books were displayed on the top part of the bookshelf. In Indonesia, although the majority are Muslim, the government recognizes six official religions, namely, Islam, Protestantism, Catholicism, Hinduism, Buddhism and Confucianism (other religions and atheism are not admitted). The childcare facilities provide an environment where children will learn to respect religious diversity from early childhood.


The large classroom for children in their third kindergarten year is divided into small zones, where a small group of five or six children sit together and a teacher stays by them. For example, in the class of "Learning to grow plants," children can observe how seeds sprout using a personal computer (see Photo 4), and then touch a real fruit and check its smell and shape (see Photo 5). This activity is effectively designed by combining digital tools and real things.


Photo 6 shows the activity of children in their first kindergarten year, singing Islamic songs (Islamic hymns) with their teacher. Because these songs are in Arabic, children do not understand the meaning, but it is effectively done so that they can gradually become familiar with the religion by remembering the name of God through singing the hymns. 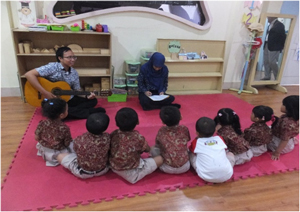 2. Recording the growth of each child with figures and episodes Photo 7: A kindergarten yard with many trees

This kindergarten offers general early childhood education based on the curriculum, as well as religion programs and events. In the religion education class, children learn the importance of establishing a relationship with God and building ties with others. For example, before and after activities, children have prayer time or storytelling time during which they talk about God. In religion events, children will practice fasting during the period of Ramadan by observing a "no-snack" day, learn how to conduct the salat ritual of worship, and make donations for orphans. 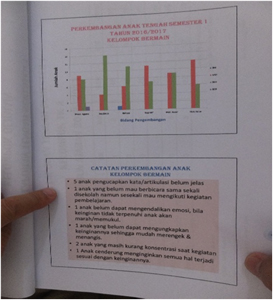 The areas of focus in the curriculum of kindergartens are (1) ethics and religious values, (2) sociality, sensitivity and autonomy, (3) language ability, (4) cognitive ability, (5) physical ability, and (6) artistic ability. Children are expected to learn independence by acquiring skills in these areas (see Photos 9 and 10). This kindergarten undertakes research on child assessments in collaboration with Jakarta National University, applying the assessment of cognitive/non-cognitive skills to evaluate each child. An academic performance report is prepared for every academic term (semester system). The report contains the quantified monthly achievements of children per activity type and episode (descriptions). Children conduct self-assessment based on the report, and teachers and parents write their comments on the children's self-assessment.

The two kindergartens I visited this time expressed some keywords such as "Act for the benefit of others," "Protect the environment," "Respect others" and "Caring for others." I was surprised by the fact that non-cognitive skills, which have been highlighted in Japan in recent years, had already been adopted in early childhood education in Indonesia and are used in the evaluation of child development. Like non-cognitive skills, the development of cognitive skills such as literacy and numeracy is also included in the program of learning through play in the same way as Japan.

Religion education is provided through several means such as religious songs, prayer times, and religious events, which help children become familiar with the religion. It is also noteworthy to mention that children are taught the value of respecting religious diversity.

According to the comments of kindergarten teachers, parents are nowadays becoming too "protective" of their child. Parents often consult teachers as they worry about "the personality or academic performance of their child." I also heard that there are many parents who are torn between the wish to take care of the child more and the wish to give the child freedom to be independent. Today when working mothers are increasing, teachers said that they tell mothers who worry about their child's academic development not to start education at home too early because it may put excessive pressure on children. I feel that parents' worries about involvement that will enhance the development of their child and how to prepare their child for school, etc., are universal issues for parents of young children around the world.

In the next article, the actual situations of families and parent-child relation in Indonesia will be reported.

Ms. Takaoka assumes the current position since 2006. She has been engaged in the surveillance study on the awareness and actual conditions of children, parents and teachers focusing on the domains of early child development; the developmental study on children's "attitudes of learning to learn"; and the study on children and digital media. Her past major studies and publications include “Questionnaire on Daily Life of Children in Japan,” “Survey of Fathers’ Views on Childrearing in Japan,” and “Basic Survey on Pregnancy, Childbirth, and Child Raising.” She serves as a member of the “Review Council for the Development of R&D Facilities for Early Childhood Education” by the Ministry of Education, Culture, Sports, Science and Technology (2015), a member of the Family Education Committee in Mie Prefecture (2016), and a member of the Chiyoda-ku Child Rearing Council (2014-).
Related Articles:
Latest Posts in this Category:
Search