Data-based Discussion on Education and Children in Japan 4: Issues Regarding Japanese Children's Reading--In Association with the Effects of Reading - Projects
中文
日本語

Data-based Discussion on Education and Children in Japan 4: Issues Regarding Japanese Children's Reading--In Association with the Effects of Reading


Shift Away from Decline in Reading Activities

In Japan, deterioration of children's academic abilities became a social problem during the 2000s. Japan's ranking in reading literacy for the 2003 Programme for International Student Assessment (PISA) dropped significantly, landing in 14th place among the 40 participating countries and regions. Japan's score was roughly in line with the OECD average. The belief that "Japanese children have superior academic abilities" wavered considerably. Due in part to this decline in reading literacy, children's shift away from reading became a big issue.

To be sure, a noticeable percentage of children did not read any books around this time. According to the results of "Survey on Reading in School" (conducted by the Japan School Library Association and the Mainichi Shimbun; in Japanese), during the 1990s, the percentage of children who did not read at all (did not read a single book during one month) was some 15% among elementary school students, but 50% and 60% among lower secondary and upper secondary school students respectively. This means that approximately half of lower and upper secondary school students were not reading any books. In an attempt to improve this situation, the government enacted the "Act on the Promotion of Children's Reading" in 2001, and accordingly, local governments were obligated to develop basic plans. Also, schools started promoting "morning reading" programs. It has empirically been revealed that reading in the morning not only enhances children's knowledge and interests in various matters, but is also effective in calming children's minds and providing stability to their learning activities.

The above trend is also corroborated by PISA results. According to a report compiled by OECD, in the survey conducted in 2000, the percentage of Japanese upper secondary school students (in first grade) who "read for pleasure" was 45%, making Japan the only country among those participating with a percentage below 50%. Second to last was Belgium with 58%, while the OECD average was 68%, revealing how low Japan's percentage was. In short, Japanese upper secondary school students read the least among the international community at this time.

However, in the survey conducted in 2009, this percentage increased by 11 points to 56%. Japan achieved the largest increase, whereas, the percentage dropped for many of the other participating countries and regions. Even so, Japan's percentage was still significantly lower than the OECD average of 63%, and its ranking was seventh from last among the 65 countries and regions. While it is encouraging that Japan is no longer in last place and on an upward trajectory, this still seems far from sufficient.

The report revealed another interesting result. It indicated that reading for pleasure is correlated with proficiency for reading literacy. In particular, the report stated that test scores are affected more by whether children read for pleasure than the amount of time spent on reading. According to a more detailed version of the aforementioned report, the difference in average score for reading literacy was some 50 points between those who "read for pleasure" and "do not read for pleasure." Since the average score is adjusted to 500, a difference of 50 points is significant, suggesting that reading considerably impacts reading proficiency.

Experiment on the Effect of Reading

That said, it is difficult to say for a fact that reading improves one's test score. My personal instinct is that children do not become smart because they read, but rather, they read because they are smart. Based on "reading habits" and "test scores" identified in a survey conducted at a single point in time, one may find a correlation between the two, but not a causal relation.

Therefore, Benesse Educational Research and Development Institute--with which I am affiliated--decided to assume an experimental environment and research how much impact reading has on improvement in academic abilities. The experiment process is outlined below.

Figure 1: Image of the Experiment


Figure 2: Distribution in the Usage of the E-Book Service

The experiment results are described below.
Figure 3 shows the change in test grades from the first test to the second by dividing the subjects into three groups by the amount of reading: "not at all," "a little" and "a lot." Test grades of the "not at all" group declined by 0.7 points on average from the first test. Meanwhile, test grades of the "a lot" group rose 1.9 points, making the difference between the two groups 2.6 points. This indicates that the more books children read, the more their test grades improved.

Figure 3: Change in Test Grades by the Number of Books Read 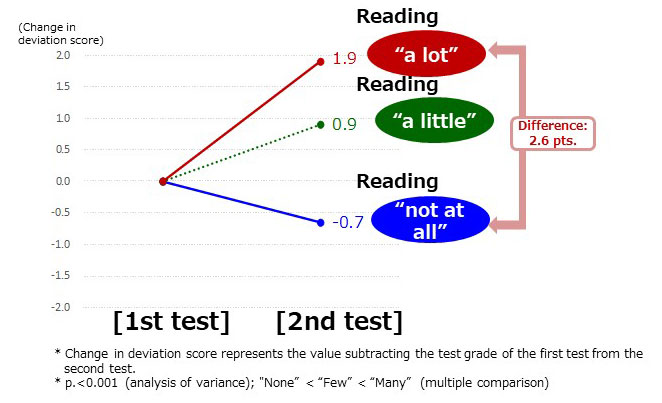 Figure 4: Change in Test Grades by the Number of Books Read (by Academic Ability Group)

Why does whether or not children read generate a difference in change of test grades? The following is my personal hypothesis. The effect of reading that probably first comes to mind is books' contents providing a direct, positive effect on learning. Since reading enhances our knowledge and wisdom, it is not far-fetched to think that matters learned through reading are reflected to test results. However, I feel that the likelihood of this scenario is low. Even if there was an impact, it would be minimal, since contents of books and tests do not necessarily correspond with each other.

The e-book service enables children to select books of their preference from among some 1,000 books. Therefore, the set of books each child reads ranges widely. On the other hand, achievement tests are developed based on the contents of each grade's textbooks. Contents of books and textbooks do not necessarily match. On the contrary, many books belong to the genres of "easy reads" or "novels."

In addition, while we grouped children who read 10 or more books into the "a lot" group for our analysis, it is most likely that academic contents that children need to learn are not as simple to the extent that reading 10 or so books during the period of over a year would raise their test grades. Needless to say, this experiment does not monitor books that children read other than the e-books provided by Benesse Corporation. A study ("Study on Promotion of Children's Reading Activities," 2019; in Japanese) conducted by the Ministry of Education, Culture, Sports, Science and Technology (MEXT) reveals that children who read e-books have a strong tendency to also read printed books. It is therefore highly likely that the children in the "a lot" group read a lot of books in general. However, even based on this presumption, I feel that it is difficult to assume that reading enabled children to learn academic contents, and as a result, boosted their test grades.

Then, why did reading enhance children's test grades? I believe it was because through reading, children were able to foster stability in their daily lives and establish an effective learning environment. I imagine that reading has indirect effects which are associated with such matters as daily habits or learning discipline. That is probably why the effect of reading was not so apparent in the group with higher test grades which consisted of those who tended to have established daily habits and learning discipline, while the effect was more apparent for the group with lower test grades which consisted of those who possessed less of such characteristics.

There was another supportive implication worth noting. Among the four test subjects, "mathematics" was the subject in which the effect of reading was most apparent. To find out why there was a strong correlation with mathematics, we broke down the analysis into individual test items and found that grades improved more for basic tasks such as calculating formula than for advanced tasks such as math word problems . We initially thought that test grades rose as a result of children's reading literacy improving through reading books, which enabled them to adequately comprehend math word problems. Contrarily, their test grades had improved because they were competently able to solve basic mathematical tasks. One can assume that children in the group with lower test grades were able to establish an environment where they would learn calmly owing to reading, which in turn enabled them to competently solve basic tasks which they previously were not able to. The outcomes of sufficient studying are reflected more easily in basic tasks. It is likely that such outcomes became visible in the form of improvement in test grades. Thus far is my hypothesis.

In any case, it is necessary to obtain a few more variables related to learning behavior (e.g., time spent on studying or changes in learning styles) in order to clarify the mechanism of reading's effect on test grades. I aim to continue exploring this topic.

Thus far, I explained what kind of effects reading has on test grades. However, children do not read (only) to improve their test grades. Reading itself should have benefits that enrich children's present and future lives through learning matters that one cannot learn at school, or feeling stimulated by portrayals of someone else's life. Adults, including parents and teachers, tend to seek obvious effects from reading; however, we should also acknowledge the aforementioned indirect effects and influence on children's inner self which are difficult to measure.

On another note, I felt that e-books, which were subject to this analysis, hold potential for enriching children's reading experiences from various aspects. According to the "Study on Promotion of Children's Reading Activities" (by MEXT) cited above, approximately 20% of all children already use e-books. This in itself was surprising, but in addition, children find e-books useful as e-books enable them to read whenever and wherever they want to, without going to the bookstore or library. While it is necessary to develop a scheme to overcome issues regarding charging fees to children, and to protect content producers through such means as copyright protection, I believe children's reading opportunities will expand further by establishing an environment where children can read books of their choice whenever and wherever they wish.

Furthermore, since e-book's record reading histories, children may be able to analyze their reading habits and decide what book to read next. They can also select books of their preference from a larger pool of books. Online bookstores already offer functions that recommend books similar to those already purchased, and in time, it should become possible to recommend books that fit each child's development and interests. We should create various reading opportunities for children while leveraging on both the benefits of printed books and the convenience of electronic devices.