As part of the “Study on Youth’s Media Usage” targeting lower and upper secondary school students across Japan, we conducted a diary analysis on media usage for one school day and one non-school day, and found that the percentage of those who did not watch linear TV was 25.6% on a school day and 31.4% on a non-school day.
Meanwhile, among the approximately 70% who responded that they watched TV (hereafter referred to as “TV viewers”), the average linear TV viewing time was relatively long - two hours or more on a school day and three hours or more on a non-school day - suggesting a polarization between the approximately 30% who did not watch a lot of TV and the majority who watched a lot. Results of a multiple regression analysis showed that TV viewing time on a school day was affected by many variables including gender, city size, household income, personality, and activity time outside home.

For some time, it has been said that young people no longer watch TV due to the rise of the Internet. How is TV currently perceived and watched among youth who are "digital natives," or in other words, who have grown up in an environment where new media such as PCs, tablets, smartphones have become widespread? Also, if some youth watch TV even given such circumstances, how can they themselves, their family environment, and relationships with friends be characterized? The Broadcast Committee for Youth Programming (The Youth Committee) of which I am a member, and which operates under the Broadcasting Ethics & Program Improvement Organization (BPO), carried out the "Study on Youths' Media Usage" (BPO Youth Committee, 2018) targeting lower and upper secondary school students and their parents, to achieve the following three purposes.

This article outlines the results for purposes #1 and #2. For detailed research results, please refer to the full report (https://www.bpo.gr.jp/?p=9470, in Japanese).

We conducted a survey research targeting households across Japan with children in the six grades between first grade of lower secondary school and third grade of upper secondary school, and asked the youth and one parent to fill in respective self-administered questionnaires. The research was conducted in 50 locations nationwide, by extracting 2,000 youths (40 youths per location) based on a stratified two-stage random sampling method using the basic resident register (i.e., a national registry of Japanese citizens). The research period spanned from September to November 2017, and surveys were sent out and collected via postal mail. 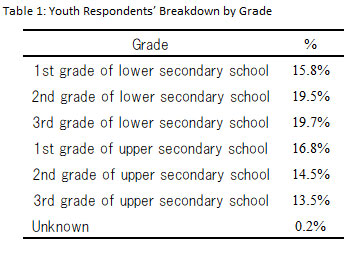 Tables 2 and 3 show the place of residence of the youth respondents. While the largest portion, accounting for some 30%, lived in the Kanto region, the rest were spread out across Japan with some 10% each living in respective regions between Hokkaido and Okinawa. As for city size, the largest portion lived in cities with a population of 100 thousand or more, accounting for over 40% of all youth respondents. 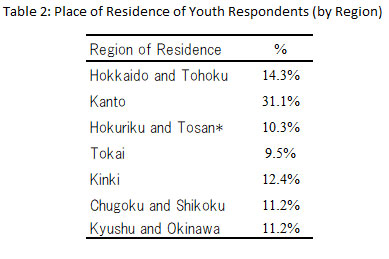 * Large city: government-designated cities with a population of 500 thousand or more, and Tokyo's 23 wards.

Parents' surveys were mostly filled in by the mother (82.3%), and respondents' average age was 46.26 years old (between 29 and 69 years old). While the response rate was low, we did not observe a large bias in respondents' attribute distribution, and believe that a certain degree of representativeness in attributes was ensured.


We asked youth respondents to keep a diary on how much time they spent using TVs, radios, mobile phones/smartphones, PCs and tablets during the 24 hours of one school day and one non-school day. The percentage of those who did not watch linear TV was 25.6% on a school day and 31.4% on a non-school day (Figures 1 and 2). 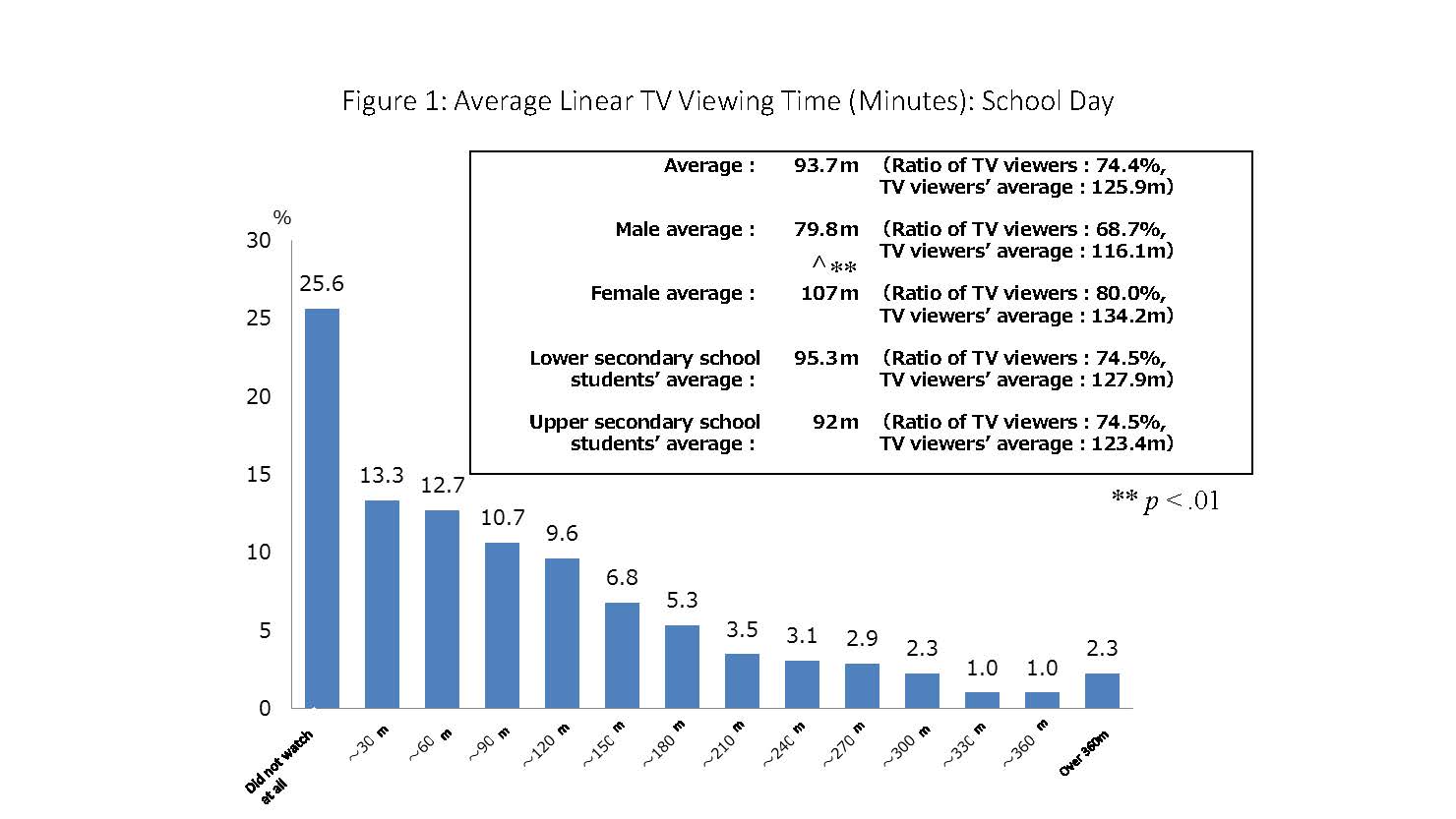 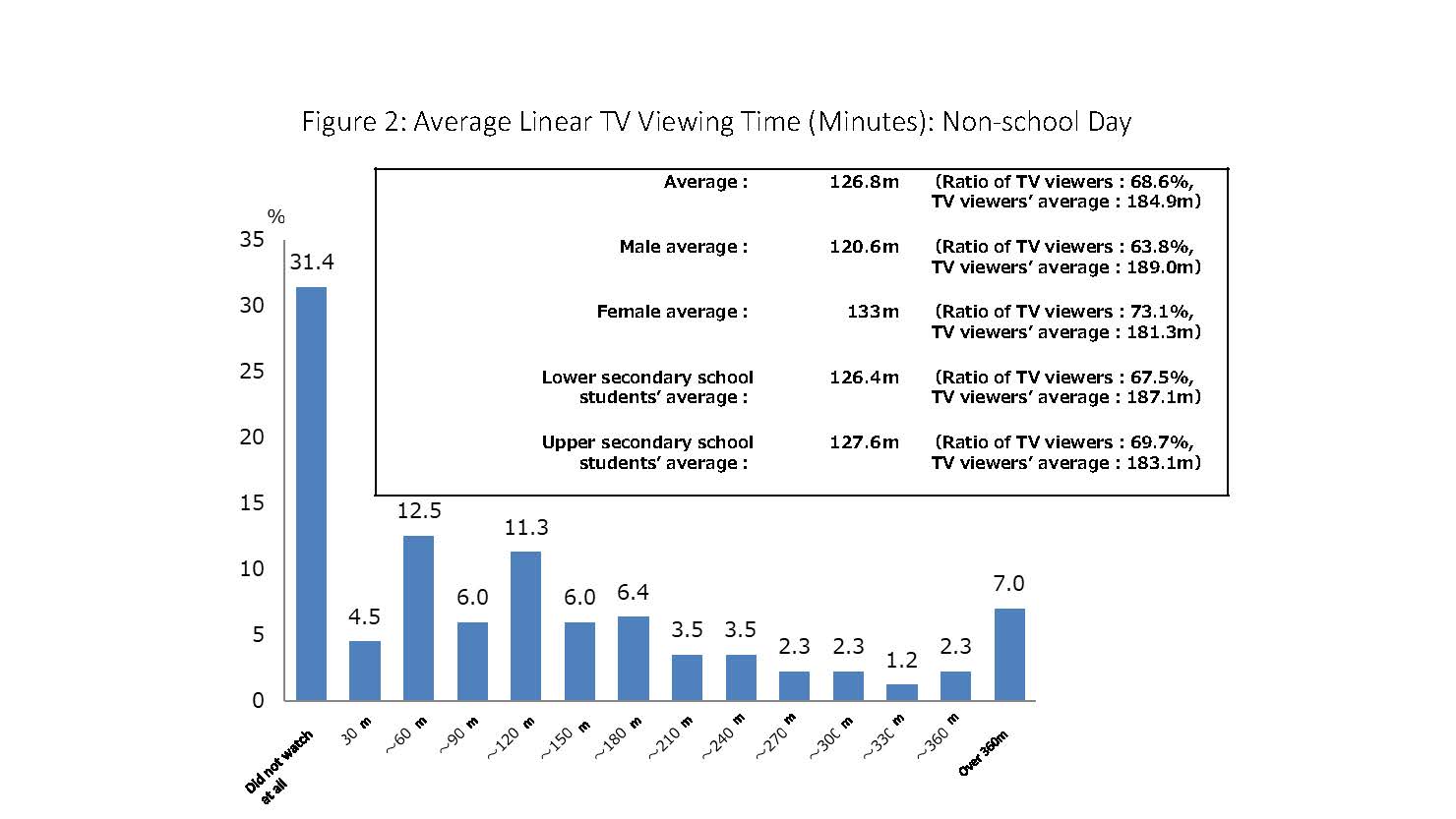 While 13.4% did not watch either linear or recorded/on-demand TV on either a school day or non-school day, it will be necessary to conduct a longer-term diary analysis to clarify whether such youths do not watch TV on other days of the week either and are truly "shifting away from TV." Meanwhile, the average TV viewing time of those "who watched linear TV," accounting for some 70% of all respondents, was relatively long, reaching two hours or more on a school day and three hours or more on a non-school day. Although the difference in TV viewing time between lower and upper secondary school students was not large, TV viewing time among females was 27.6 minutes longer than males on a school day, showing a statistically significant difference (79.8 minutes for males; 107.4 minutes for females; p < .01). The results suggested a potential polarization between the majority who watched TV for a rather long time, and the minority who hardly watched at all. Going forward, it will be necessary to track whether the strata that does not watch TV grows.

As for non-school days, results showed that TV viewing time was affected by whether youths stayed at home, and whether there was someone to share TV contents with (i.e., watch TV programs with parents, or talk about TV contents with friends) (Figure 4). No relation was detected with the time spent using smartphones or mobile phones on either a school day or non-school day. 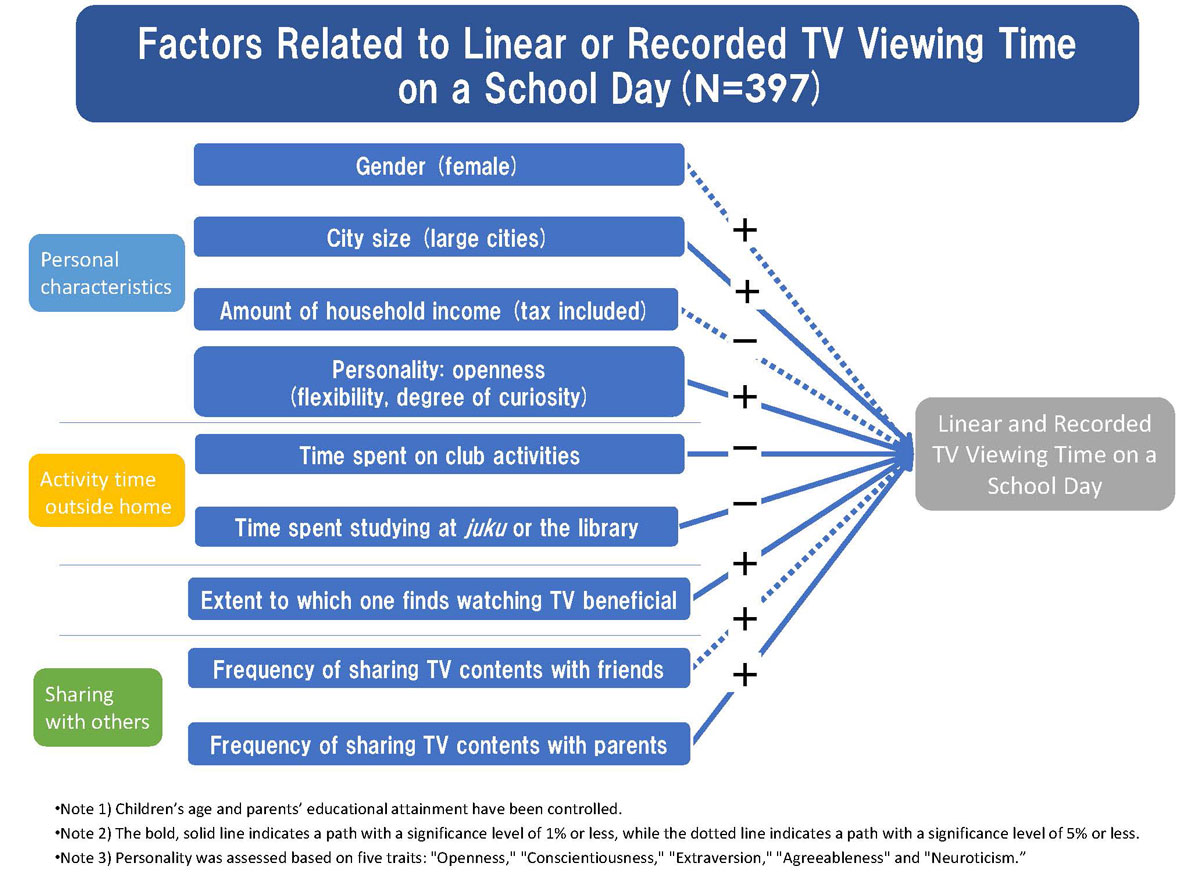 Click image to enlarge
Figure 3: Factors Related to Linear or Recorded TV Viewing Time on a School Day
Only includes statistically significant factors based on the multiple regression analysis.
(For details, please see Table 46 on p.61 of the report; https://www.bpo.gr.jp/?p=9470, in Japanese). 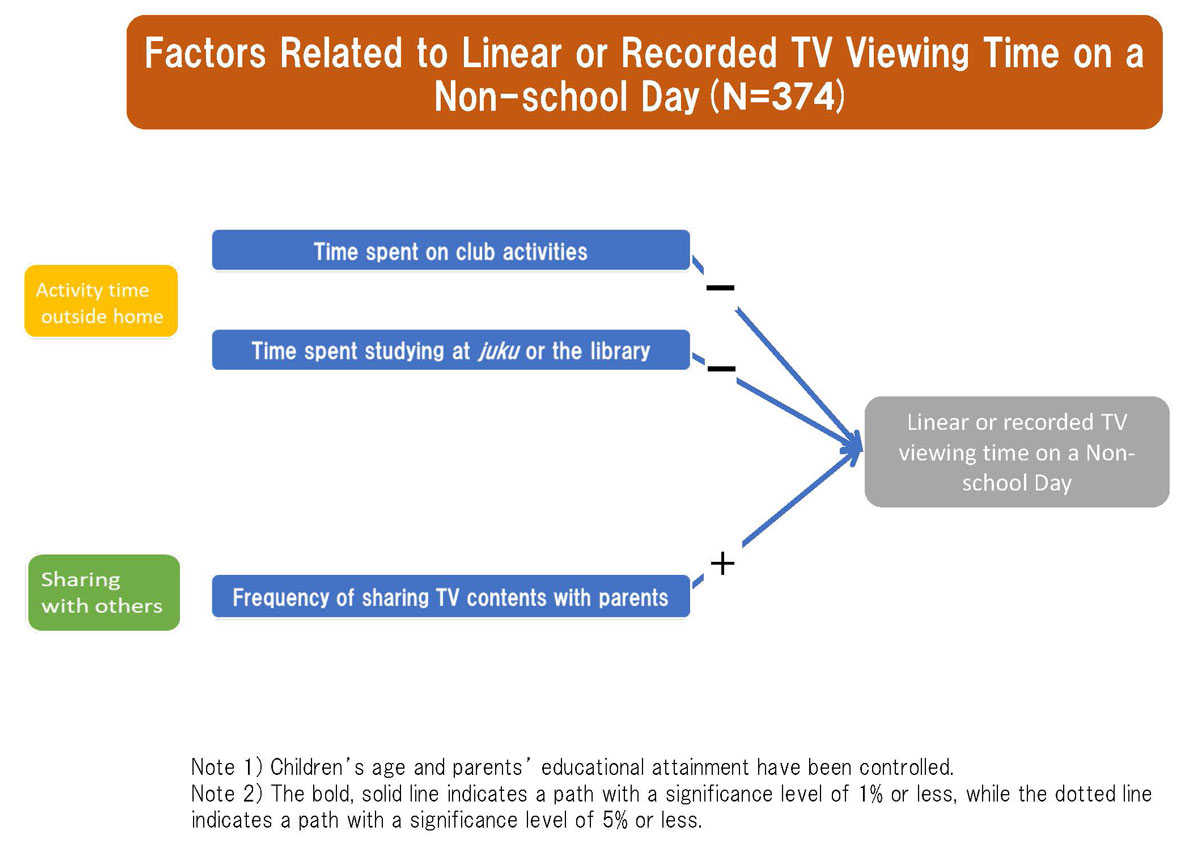 Click image to enlarge
Figure 4: Factors Related to Linear or Recorded TV Viewing Time on a Non-School Day
Only includes statistically significant factors based on the multiple regression analysis. (For details, please see Table 47 on p.62 of the report; https://www.bpo.gr.jp/?p=9470, in Japanese).

Results revealed that the shortness of activity time outside home, and the high frequency of sharing TV contents with parents (mothers) were the main effects on TV viewing time (i.e., the effects of these factors were not offset even when considering the effect of all other factors subject to the analysis) for both a school day and non-school day. Regardless of the amount of time spent at home, it was suggested that the time youth respondents spent watching TV was influenced by whether they shared and enjoyed TV programs with their parents. This might be related to parents' preference for TV and good parent-child relationships. More in-depth analysis would be possible by assessing such factors, and examining the details including what kind of programs they watch together and what kind of conversations take place. Also, while we could only survey a single parent (mostly the mother) due to research restrictions, it would be desirable to extend the target to entire households including fathers, grandparents and siblings.


As revealed in the multiple regression analysis described in Section (2), sharing TV contents with parents was a factor with relatively strong relevance to youths' TV viewing time. Adolescence or the youth period is a turbulent and unstable period when individuals seek psychological independence and become strongly assertive or hostile, and conjures a strong image of individuals valuing their own privacy even at home and distancing themselves from their parents. One might expect that new media such as smartphones, PCs and tablets have led youth to spend more time alone watching programs they want to, and less time watching TV with their parents.

However, when asked how often they watched TV with their family, 60.6% of the youth respondents replied "almost all the time" or "most of the time." The sum of those that selected a frequency of "about half the time" or more was 83.6%, revealing a high ratio (Table 4). According to the diaries on TV viewing time for one school day and one non-school day, the ratio of average TV viewing time with parents or other family members to average total TV viewing time was 71.9% for linear TV and 47.6% for recorded or on-demand TV on a school day, and 64.9% for linear TV and 42.6% for recorded or on-demand TV on a non-school day. In other words, while the majority of those watching recorded or on-demand TV watched alone, a considerably high ratio of 60% to 70% of those who watched linear TV watched with their family. As for parents' surveys, 93.4% responded that they "always" or "sometimes" "watch TV with one's child and laugh together," suggesting that many households with lower and upper secondary school students watch TV together with TV serving to facilitate communication within the family. Also, the fact that 70% or more selected "programs that the entire family can enjoy" as "programs one actively wants to watch," suggests that currently, Japanese families with lower or upper secondary school students have a strong propensity for watching TV together. 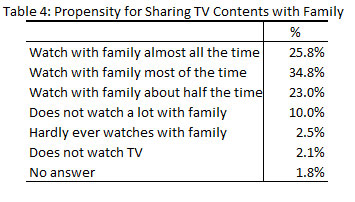 By analyzing the relation between sharing TV contents with family and satisfaction in daily life of youth respondents (based on seven categories including "enjoys every day" and "is satisfied with one's daily life") (Figure 5), the group that shared TV contents with their family had a significant tendency to be more satisfied with their daily life compared to the group that did not. While one can assume that parents must be delighted to be able to enjoy watching TV with their children even during their adolescence and youthperiod, there also seems to be a positive meaning for children themselves. The high degree of sharing TV contents with family may result from the physical factor of "one large-screen TV per family" becoming widespread, and one can assume that sharing a large-screen TV in the living room stimulates communication within the family, which in turn further motivates youth to "want to watch TV with one's family." Longitudinal study will be necessary to reveal the causality of family relationships during adolescence and youth phase, and communication mediated by TV. 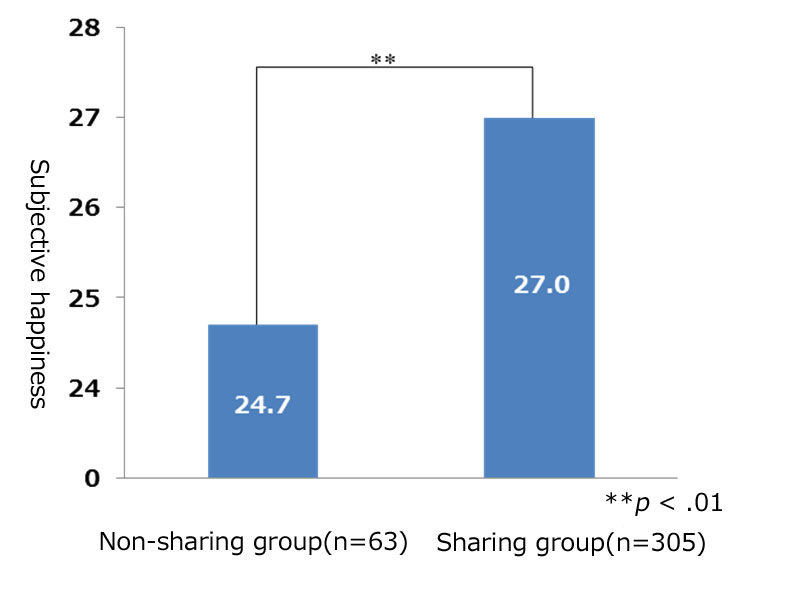 As the Internet advances at an accelerating speed, it will be necessary to elaborate on how TV as a media and TV programs produced by broadcasters are watched by youths going forward, and how such programs would affect their daily lives, and physical and mental development, together with the influence of smartphones and other media.

Professor at Faculty of Core Research Human Science Division, Ochanomizu University
After serving as Director of the National Institute of Mental Health, National Center of Neurology and Psychiatry, was appointed Associate Professor of Graduate School of Humanities, Ochanomizu University and assumed current position in 2006. Specializes in developmental psychopathology and educational psychology, and is currently conducting research on home, childcare, school and media environments that affect the development of children’s personality and psychopathology. Conducts longitudinal follow-up studies spanning the period from gestation to adulthood, as well as behavioral genetic research of twins.
Related Articles:
Latest Posts in this Category:
Search