According to the OECD's 2015 Report, social and emotional skills are defined as individual characteristics that are (a) manifested in consistent patterns of thoughts, feelings, and behaviors, (b) developed through formal and informal learning experiences, and (c) influence important socioeconomic outcomes throughout the individual's life. More specifically, social and emotional skills include perseverance and self-control to pursue goals, cooperativeness and empathy to cooperate with others, and emotional control in various life situations.

These skills also include numerous concepts similar to personality characteristics which have been studied in the fields of developmental psychology, child psychiatry, pediatrics and ECEC studies. Therefore, it is useful to consult traditional concepts and knowledge bases in these areas to seek effective ways to develop social and emotional skills.

Temperament is the term for personal characteristics used by developmental psychologists to describe individual differences in emotional and behavioral control which emerge very early in life, directly after birth. Each individual child is born with his or her own temperament. Individual differences in emotional and behavioral reactions can be observed among newborn babies. In fact, the results of the Brazelton Neonatal Behavioral Assessment Scale (BNBAS) targeting 3- and 4-day-old infants revealed that the scores of each infant vary in six scoring items such as the range of state (excitability, tendency to cry, fussiness), the regulation of state (soothability), and motor control. Therefore, temperament can be regarded as one of the personality characteristics at the early stage of child development.

The BNBAS scores should be considered, regardless of whether the scores are high or low, to represent the profile of each child's behavioral characteristics. Adults should respect the personality of each child and help children accommodate themselves to external environments. By receiving extensive support from adults at an early stage of development, children can obtain the ability to adapt their innate behavioral characteristics to external environments. I believe that this adaptive ability is one of the social and emotional skills. 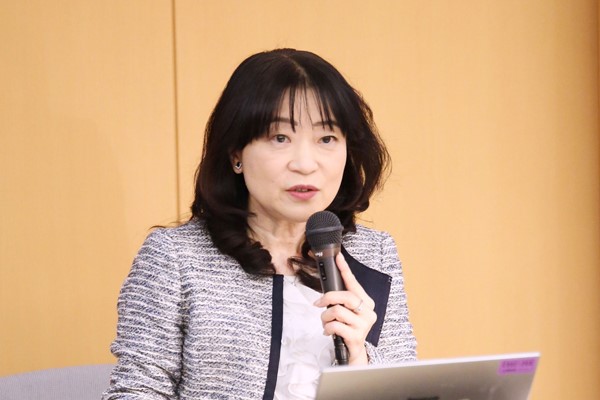 Cooperativeness in children aged four or above improves rapidly

Recently, a large number of psychologists conduct research on personality by applying the theory of "Seven-Factor Model of Personality." This model is proposed by Claude Robert Cloninger, an American psychiatrist, who argues that "individual differences in the metabolism and secretion of neurotransmitters are related to personality." Changes in personality with advancing age are measured using various scoring items based on seven factors. These are made up of four temperament dimensions such as novelty-seeking (excitability and impulsiveness) and persistence, and three character dimensions such as self-directedness and cooperativeness (social acceptance, empathy and compassion). In this way, the developmental phases of personality and related factors have been studied. I have developed a Japanese version of a measurement tool based on this model through collaboration with Professor Cloninger and used it to conduct study on personality during preschool period. Here, I will show you the results of my study, which examines the developmental changes of children aged two to six years.

Cooperativeness, among other scoring items, shows the most significant change in those children, which has a close relation with social and emotional skills. The score value had increased dramatically by the time they were four years old. This probably relates to the Theory of Mind, a term from the field of developmental psychology. It is known that children of that age will have become able to understand other people's feeling and thoughts, which tends to accelerate their empathetic and cooperative skills (Figure 1).

Meanwhile, the score of impulsiveness decreased as they grew older, indicating that their ability of self-control in response to external environments is steadily developing. 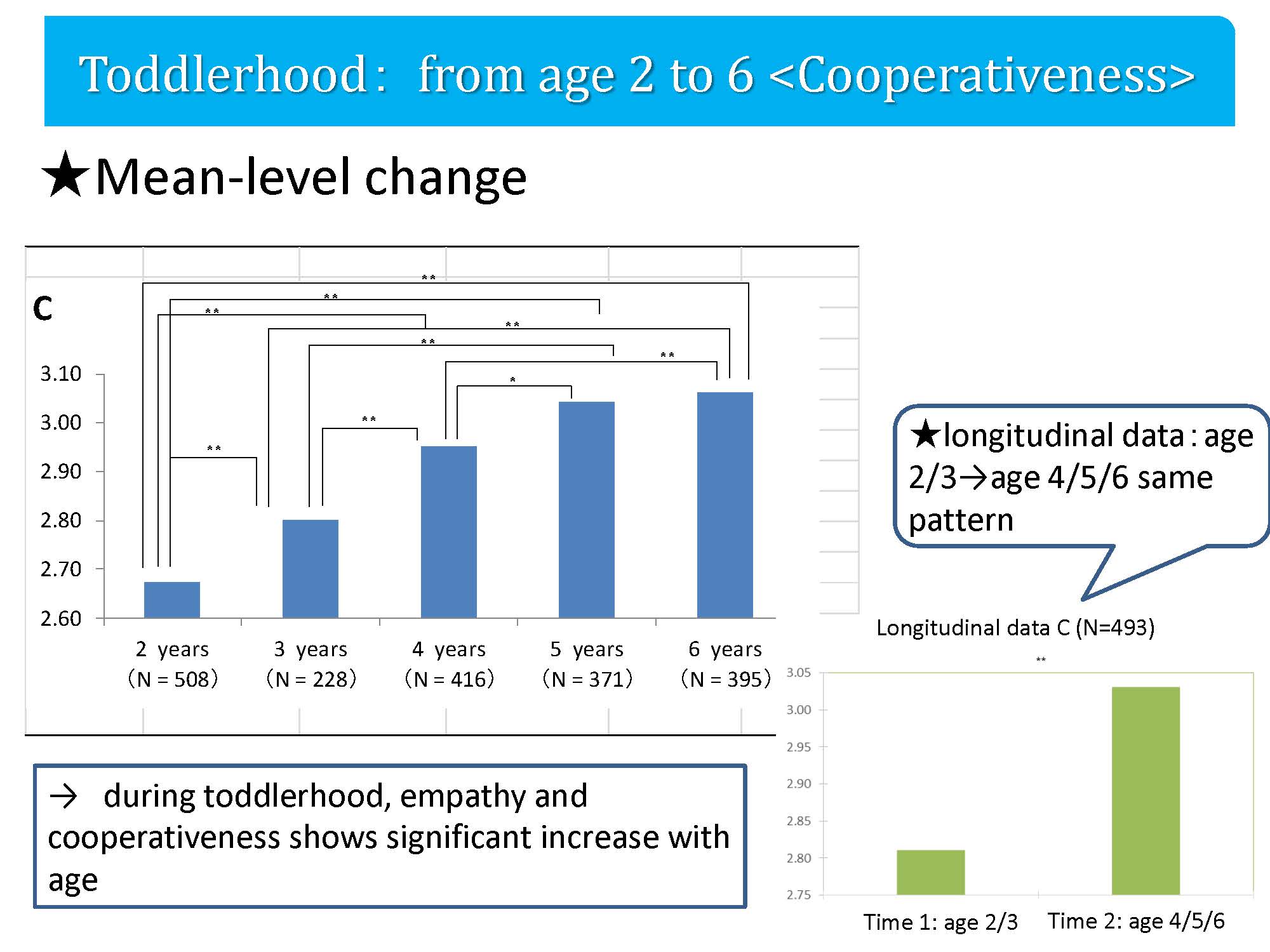 Identical twins also show individual differences, depending on the involvement of parents

Then, to what degree will personality characteristics, the fundamental aspects of social and emotional skills, be affected by external environments? To clarify environmental influences on the development of children, psychologists have traditionally conducted twin studies. If individual differences occur in the development of identical twins who share almost the same genetic profiles, it may have been caused by environmental differences.

One of the non-shared environmental factors that affects the development of children is parenting, that is, the child-rearing practices and involvement of parents. According to a survey study targeting 274 pairs of identical twins aged 2 to 3 years, it is revealed that a personality difference was confirmed between identical twins when their mother gave a disproportionate amount of her affection to one twin. The twin who received warmer parenting tended to exhibit stronger persistency than the other twin when they were four to six years old. Therefore, the mother's involvement is considered to have an influence on the child's persistency.

Poor parenting due to poverty affects the development of children

The factors which hinder the development of social and emotional skills have also attracted substantial research attention in the field of developmental psychology. Among these factors, chronic adversities draw particular attention. Chronic adversities refer to negative life events such as household poverty or low-income, parental psychiatric disorder, conflict between parents, inappropriate care, or an inadequate school/community environment. It is very difficult for children suffering to escape from such situations. Family environmental factors, in particular, are difficult to change, and children will be subject to the cumulative impact of stressful life events over the years.

The theory of social causation perspective discusses the impact of poverty on the development of children. A research study has been conducted to clarify such an impact based on two processes, the "Family Investment Process" and the "Family Stress Process" (Figure 2). The former refers to the influences on the development of children caused by poverty, because parents are unable to purchase educational materials such as toys and picture books to facilitate children's cognitive development or cannot provide favorable educational environments in school or the community. The latter process refers to the influences that hinder the development of children caused by worsening parental mental health and poor parenting in circumstances of poverty. It is considered that children who failed to experience positive parent-child interaction in their childhood tend to find difficulty in developing social and emotional skills to accommodate themselves to schools and society, which may eventually affect their economic conditions in later adulthood. 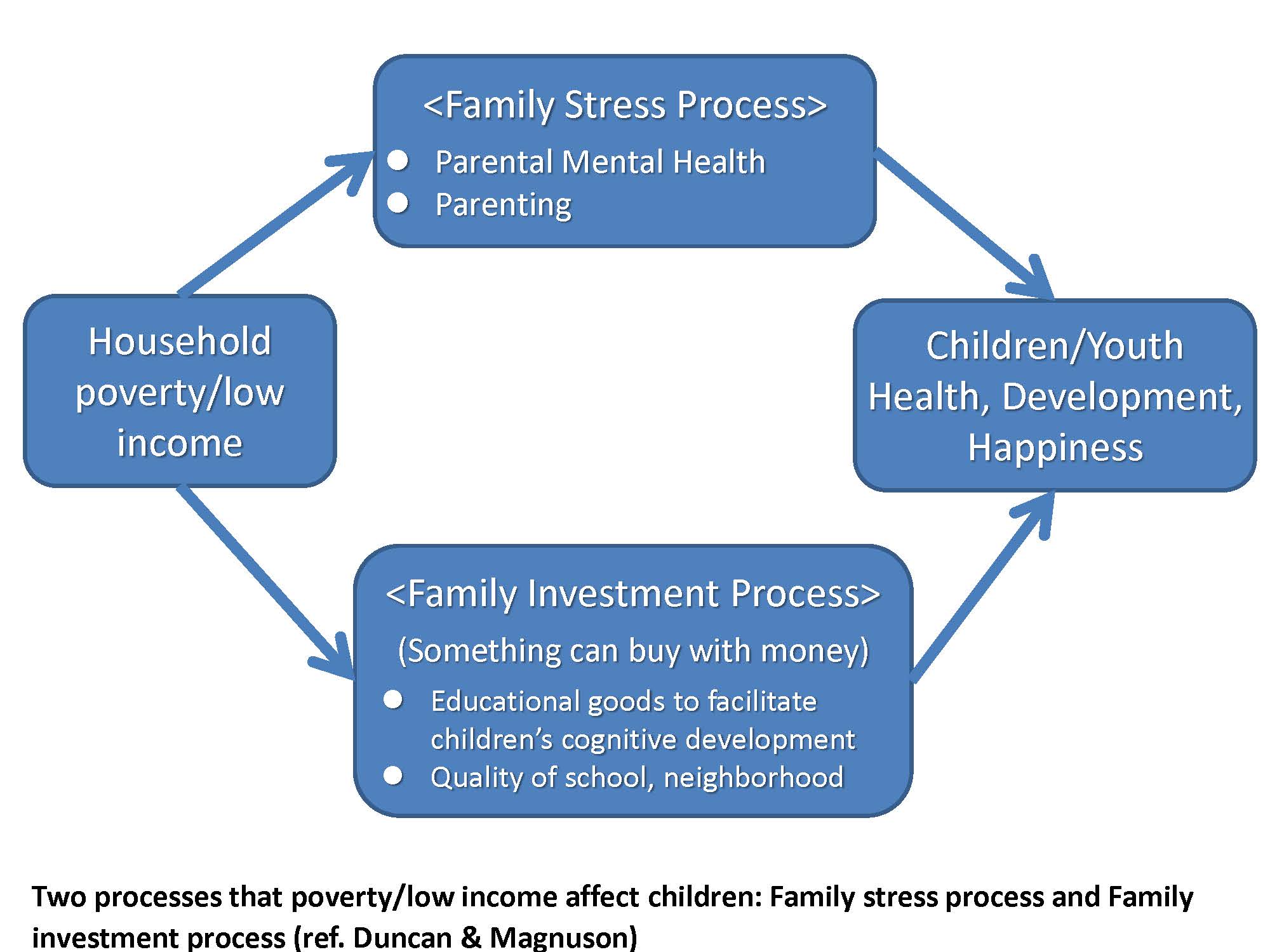 I conducted a study targeting about 600 households to verify the impact of household poverty on the development of children, from birth to age 12. The survey results show that poor parenting is more likely to be seen in poor families and that a mother's poor parenting affects the academic achievements of the child in the third grade of elementary school. This poor academic performance tends to damage the child's quality of life when he/she becomes a fourth grader, and later, causes school maladaptation and depression (Figure 3). 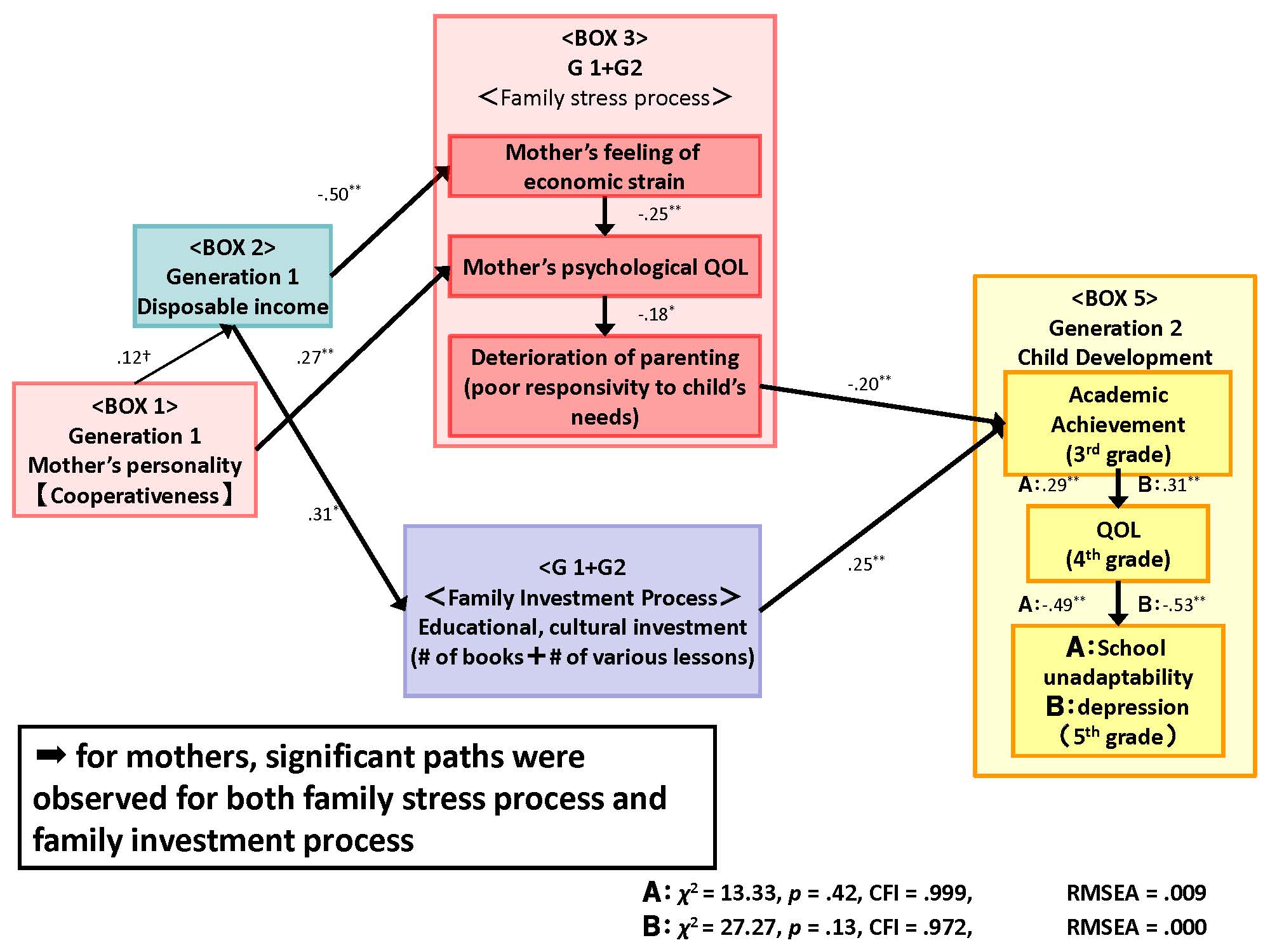 Therefore, besides providing financial assistance, such as finding jobs for parents, it is also essential to examine the degree of deterioration of parenting in economically disadvantaged families and help them increase positive parent-child interactions and support them by providing necessary goods for children. According to recent studies, it is revealed that appropriate support can prevent adverse effects on the development of children in poor families. It is particularly crucial to provide extensive support for mothers who generally spend longer periods of time with their child every day.

Professor, Faculty of Core Research Human Science Division, Ochanomizu University. Before assuming her current post, she served as Director General of the National Institute of Mental Health, National Center of Neurology and Psychiatry (NCNP), and an assistant professor of the Graduate School of Humanities and Sciences, Ochanomizu University from 2002 to 2006. She specializes in developmental psychopathology, pedagogical psychology. Her research themes include family/childcare/school environment or media environment, which affect the development of personality in childhood or the onset of mental illness. She has also conducted a longitudinal follow-up survey from pregnancy to adulthood, and studies on behavioral genetics targeting twins.
Related Articles:
Latest Posts in this Category:
Search