TOP > Projects > ECEC around the World > [Japan] How Preschoolers Perceive and Value Their Favorite Places to Play: Listening to Children's Voices Using the Mosaic Approach

[Japan] How Preschoolers Perceive and Value Their Favorite Places to Play: Listening to Children's Voices Using the Mosaic Approach

Play has a special role in our lifelong development (Bateson, 2011 and others). It is an invaluable part of children's mental and physical activities and provides a foundation for learning in their middle childhood and beyond (Brown, 2010; Gray, 2013). In fact, children's play has been uniquely defined in different fields including philosophy, psychology, education, early childhood education, etc. (Pelligrini, 2011; Smith & Roopnarine, 2019, and others). Researchers today regard children as actors and are more interested in their perspectives on their playful activities. Children's play has been widely studied for decades from several academic perspectives (Piaget, 1962; Vygotsky, 1978; Erikson, 1950, and many others) and their developmental, psychosocial, and adaptive benefits have been emphasized. The importance of playfulness in educational settings has also gained much attention, and many play-based programs are designed by education professionals and policy makers. However, these are based on adults' perceptions whereas children's play must be studied from children's perspectives (McInnes, 2013). In this regard, there are few research studies or findings. Children's perspectives are necessary for educational practices to be ecologically valid and effective (Barnett, 2013).

The mosaic approach is a framework that combines different modes of communication such as speech and visual information to listen to children's voices (Clark & Moss, 2011). This integrated approach emphasizes the importance of the use of ordinary and familiar tools for children and treats a young child as a perfect communicator; it procures children's perspectives using various simple and accessible visual and auditory mechanisms. It combines different kinds of information from children as pieces of a mosaic to acquire an overall understanding of their perceptions and perspectives.

In Japan, studies using this approach have accumulated their findings. We know that children in Japanese Early Childhood Education and Care (ECEC) settings prefer playing in certain places that have some common characteristics. For instance, Miyamoto et al. (2016) pointed out three physical features and eight functional features that children particularly prefer.

We are also aware of the discrepancy between preschool children's perceptions of play and those of their teachers (Sugimoto et al., 2019). In their favorite play space, children engage in various activities--physical and mental. For them, merely observing or watering flowers in the garden could be play; merely looking at their favorite paintings on the wall of their classroom could be play. What makes them call such activities play? While previous studies have found some representative characteristics of children's preferences, it is still unknown how children feel in their favorite places, what they do there, and what they learn from their favorite activities.

The mosaic approach enables listening to children's opinions, making it possible to closely study their individual differences, to better understand their perceptions so as to create an improved, more playful learning environment for them. In the present study we are interested in investigating the factors that affect children's perceptions of their favorite places to play.

1.2 Purpose of the present study

The purpose of this research is to explore how preschoolers perceive and value their favorite places to play within the framework of the mosaic approach.

We used the academic task-value scale developed by Ida (2001), which is generally used to examine the academic motivation of learners in middle childhood and beyond. It should be interesting to see the applicability of the scale to preschoolers' values and perceptions.

Two groups of children participated in the research from January to March, which marks the final period of the Japanese academic calendar.

Following Miyamoto et al. (2017), the framework of the mosaic approach was used for the research. In the photo projection method, children were asked to take photos of their favorite places in their school. Then, quasi-structured interviews were conducted with each child using photos taken by the children--questions included why they like the places and what they do there. They were also asked to rank their favorite places and assign reasons for their preferences.

Children assign different types of task-values to their favorite places where they play. 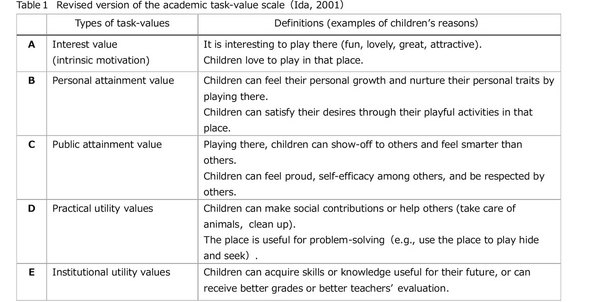 The academic task-value scale was originally developed to measure students' perceptions of and attitudes toward academic tasks provided by teachers in classroom activity or homework assignment (Ida, 2001). It is designed to be evaluated on a seven-point Likert scale. For preliterate preschoolers, we made this scale binary: i.e., yes or no and qualitatively analyzed children's answers and comments based on this scale. We awarded one point if a participant gave the definitions. If not, then no point was awarded. Therefore, either one point or zero was awarded for each place that the children chose. Finally, we calculated the score and performed statistical analyses. More than one kind of value can be given to each place.

Table 2 Number of children's favorite places in their schools

3.1 Children's value assignment on their favorite places in their schools

The scoring was based on Table 1. For each task-value per place, we awarded one point (e.g., the chin-up bars -> personal attainment value one point). Each place received more than one task-value, depending on children's value assignment (e.g., the rabbit house -> interest value and practical utility value).

Our results show that children found interest value in 73.6 percent of their favorite places, i.e., the places are interesting and funny to play in; they also found other task-values such as personal attainment and practical utility values (Figure 1). 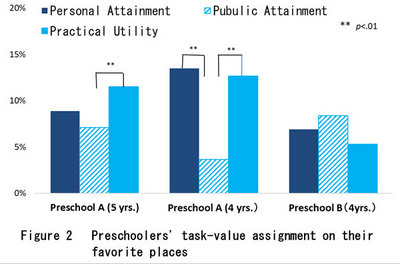 3.3 Practical utility value and the childcare policy of preschool A

Children in preschool A were likely to assign the practical utility value to their favorite place to play. In this preschool, children routinely cleaned the floor of the open deck and took turns to look after rabbits. Five-year-old children in this preschool are in-charge of cleaning. Teachers do not interfere or instruct and support the children whenever needed. Interestingly, 9 children chose the open deck as one of their favorite places because they enjoyed cleaning the floor with a cloth. We conclude that cleaning could play a role in children's identification of a place as interesting or fun. Preschoolers do enjoy cleaning public places or taking care of animals for the preschool, and children feel such places have a practical utility value.

3.4 Variations in children's value assignment on their favorite places

Children assign different task-values to the same place, even though they play together. Table 3 shows cases where boys and girls have assigned different types of values to their favorite places within the same ECEC setting. In some places, boys find interest value while girls find some other kind of values, such as personal attainment value. However, we need to further investigate such differences with a larger sample of preschools and children. 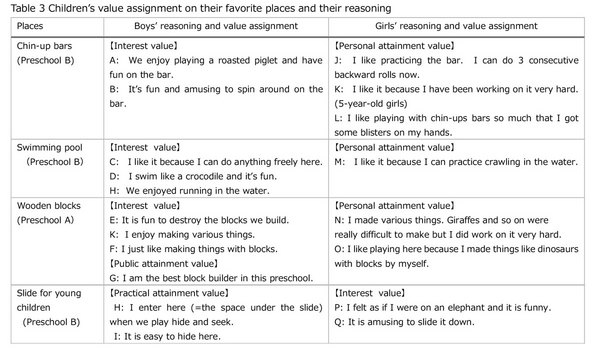 3.5 Children assigning values other than the interest value

The following two cases show that children favor other task-values than the interest value of the place. In case A, a girl values her own personal attainment or growth, which seems to be influenced by her mother's values. In case B, a boy prefers competitive places and plays and so favors public attainment value, which seems to be influenced by his father's values.

Case A: A child emphasizing the personal attainment value

Some children from the two preschools had values other than the interest value. In particular, a girl from preschool A had the personal attainment value in most of her favorite places, for example, the chin-up bars, the playground, and the easy-made planter for Japanese radish (Figure 3). She liked the chip-up bars because she wanted to practice and improve flipping on the bar.

She also liked the easy-made planters as she liked to watch vegetables grow and wanted to eat them to be healthier and bigger. She said that her mother told her about the importance of balanced diets, including vegetables, for good health and growth. Her mother's parenting and values seemed to affect her preferences for places and behavior. 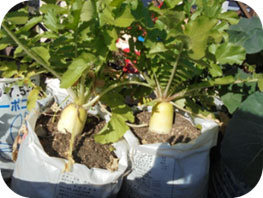 Case B: A child emphasizing the public attainment value

On the other hand, a boy from preschool B placed public attainment values on most of his favorite places where he could compete with other children, such as the playground and the puzzles in his senior fellows' classroom, and Shogi. For him, it was fun to win. He preferred competitive plays and situations in his school as well as at home. He not only enjoyed competing with his friends, but also enjoyed playing games such as Shogi and Othello with his father at home. He seemed to share the public attainment value with his father, which in turn may have affected his own preference for places to play in his school.

In summary, these two cases suggest that some preschoolers find the personal attainment value or the public attainment value more important than the interest value, and that children's relationship with their family and shared values may affect their decisions related to assigning of task-values.

The present study found the following characteristics of preschoolers' perceptions and values of play and playground. First, in general preschoolers had about seven favorite places to play in their schools and uniquely assigned task-values to their favorite places to play. Even if children played together, they found different meanings and values in their favorite places to play, based on their unique perceptions and motivations. Second, preschools' play environment and their childcare policies could impact the value that children assign to places to play. Children are likely to assign the personal attainment value to such places where they can play freely and with autonomy. Children may find the practical utility value in places where they can experience prosocial activities such as taking care of animals and cleaning public spaces.

Acknowledgement
The author is very grateful to the teachers, the children, and their parents who helped us pursue our research. This research is a part of the collaborative research with Kiyomi Akita (Graduate School of Education, the University of Tokyo); Yuta Miyamoto (Graduate School of Education, the University of Tokyo & JSPS); Mariko Miyata (Shiraume Gakuen University); Machiko Tsujitani (Shiraume Gakuen University & JSPS); and Kaori Ishida (Preschool Outdoor Environment Design Office). This study was financially supported in part by Cedep (Center for Early Development & Early Childhood Education and Policy Research) at the University of Tokyo (SEED Project 2015-2019; Project leader: Kiyomi Akita).