How do kindergartens and families in China recognize the "attitudes of learning to learn," which are the non-cognitive skills such as curiosity, collaborative skills, self-assertion, self-restraint and perseverance? To obtain an answer to such a question, a research team at the Benesse Educational Research and Development Institute, in collaboration with Child Research Net, visited Shanghai and Chengdu to make observations and conduct interviews at kindergartens and family homes.

I had thought that education of "reading/writing, numeracy and logical thinking (cognitive skills)" was greatly valued in China and parents enthusiastically provided their children with a lot of education with high expectations for them. However, I changed my mindset after visiting kindergartens and families in China. According to the director of a public kindergarten in Shanghai, education in non-cognitive skills has now gained recognition in China and is specified in the "Guideline for Transition from Preschool to Elementary School," which is available online for parents. Kindergartens prepare their curriculum in the areas of health, language and literacy, social development, science and mathematics, and the arts based on the "Guideline for Learning and Development of Children Aged 3-6." Education in non-cognitive skills is incorporated in the curriculum in an interdisciplinary style, but it is expected to be developed mainly in the area of social skills.

How about families, then? We visited three families with children aged five to have interviews (as a semi-structured interview survey) with the mothers. After the interviews, we asked them to show us their children's toys and intellectual education materials. In the interviews, we asked the mothers about the daily schedule of their children, their situation of childrearing, their childrearing values and beliefs, and intellectual education such as enrichment lessons. In this report, I will explain my impressions of current childrearing practices in the cities of China obtained from this visit, and how Chinese mothers perceive the "attitudes of learning to learn."

1. Changes in information source for childrearing: shifting from grandparents to IT tools

What was most striking for me during this trip to Shanghai and Chengdu was the popularization of IT technologies. The people I saw at the airports and restaurants in the cities as well as the staff of the local research company who accompanied us, kindergarten teachers and mothers constantly had their smartphones in their hands and communicated with each other even during working hours. Mothers said that they often obtain information about childrearing from the internet. They do research at well-known websites with a good reputation and those of experts to obtain reliable information.

The director of the public kindergarten we visited in Shanghai said that she spent 50% of her time interacting with parents, valuing the importance of communications with them. In addition to face-to-face interaction, she effectively uses IT technologies such as the kindergarten's website to provide information and SNS to exchange information. She tries to convey only reliable childrearing information based on scientific evidence using the kindergarten's website. Parents also utilize IT technologies. For example, they recorded a kindergarten event and shared the video among the SNS group members for parents who could not attend the event.

In contrast, mothers, who had acquired evidence-based scientific knowledge, sometimes have difficulty accepting conventional advice from their grandparents' generation caring about the health of their grandchildren saying, "Have the children eat more meat and fish" and "Make sure children wear enough to stay warm." I had heard that in China, where the majority of families are dual-income, the grandparents play an important role in bringing up children. However, the three families we visited this time did not receive daily support from their parents, although these families were dual-income nuclear households. There may be some differences between nuclear families and three-generation families regarding to whom they consult for advice on childrearing and their source of information (Data to be obtained through our survey on this topic).

2. "Attitudes of learning to learn": Childrearing focusing on collaborative skills

Within our research, five non-cognitive skills--curiosity, collaborative skills, self-assertion, self-restraint and perseverance--are defined academically as the "attitudes of learning to learn" that should be acquired before starting elementary school. In the kindergartens, these are defined as "learning ability" and are nurtured in the process of daily activities. Mothers also understand the importance of non-cognitive skills and hope their children can "care for others" and "express their thoughts to others," or namely, acquire collaborative skills and self-assertive skills. A mother in Shanghai told me that it is important for children to not only have academic skills, but also to care for others and have a spirit of volunteerism, in order to survive in the current society.

When we asked the mothers what kind of an adult they wanted their child to grow up to be, they chose the answers of a "Person with firm opinions" and a "Person causing no trouble to others" from among the answers we provided. When we asked the same question in our questionnaire surveys targeting mothers in Shanghai conducted 10 years and 5 years ago, most respondents chose the answers of a "Person showing great competence at work" and a "Person respected by others," while just less than 10% of the respondents chose the answer a "Person causing no trouble to others". I found that there were signs of change in the mindset of mothers in China. We also asked the mothers how they wanted to be involved in their children's learning, they answered, as mothers in Japan do, that they prefer to be involved in learning in a way "valuing children's ideas" instead of forcing children to acquire knowledge in an instructive way. During the interview survey, I felt like I was talking to Japanese mothers. The perspective of child education and the way of interaction with children shared among Chinese mothers are very similar to those of Japanese mothers.

3. Mothers worrying about children's learning after they start elementary school

Next, we asked the mothers about children's enrichment lessons. They answered they chose various lessons such as speech (practice of acting as a moderator or providing a presentation), dance, piano, arts and crafts, etc. respecting children's interest and motivation. They said they want to raise children liberally by encouraging them to do anything they are interested in, because they had not been happy with their education-obsessed parents with strict discipline in their own childhood. As for their child's academic qualification, they are only willing to provide them to whatever extent their children want to receive. There was no "tiger mother (a demanding mother pushing her child to be successful) *1" among them.

The interview survey indicated that these mothers seemed to be worried about their children's academic achievement after entering elementary school, which was still about a year ahead. They said they agree to the education approach that nurtures children's non-cognitive skills such as social skills through play and wish to provide any opportunities for children such as enrichment lessons to learn anything they are interested in. At the same time, they expressed their worries or anxiety about whether their children would keep up with their study at elementary school, which would start in about a year. For example, in China, there is a writing system to transcribe Chinese sounds into the Roman alphabet and phonetic symbols called "Pinyin." Children learn Pinyin when they enter first grade in elementary school. One of the mothers in Shanghai told me that the pace of teaching Pinyin at school is quite rapid, based on the premise that children already know Pinyin. For this reason, she sends her child to a Pinyin class, and also teaches the 26 Roman alphabet letters to her child using off-the-shelf workbooks to help the child prepare for the lesson of Chinese characters after starting elementary school. In this way, she was trying to teach the child how to learn, memorize and acquire study skills (in China, first and second graders in elementary school learn 1,600-1,800 Chinese characters and are expected be able to write 800-1,000 Chinese characters as the first stage of compulsory education. In contrast, Japanese first graders learn 80 Chinese characters at elementary school *2). Another mother said that she had bought a workbook for a reasonable price of around 10 Yuan (approximately 160 yen), and made her child sit down and do the workbook exercises at the same time each day. All of the three families interviewed in Shanghai and Chengdu had put Pinyin and Chinese character posters up on the walls of the living room.

During the interview survey, I felt that the mothers were struggling between two conflicting feelings; hoping to raise their children freely and encourage them to do anything they are interested in during their early childhood, but also worrying about children's learning after entering elementary school which urges them to teach their children self-restraint and cognitive skills such as reading/writing and numeracy before starting elementary school.

While kindergarten education has been rapidly and markedly changing in recent years focusing on the importance of non-cognitive skills, it seems that there are parents who are worrying about their children making a smooth transition into elementary school that emphasizes acquiring cognitive skills.

The above are my impressions from my visit to the three families in China. Our research team is planning to conduct a questionnaire survey later, targeting 3,000 mothers in China. I look forward to reporting the analytical result of the survey and whether the results will corroborate my impressions.

The next post will be a report on a visit to some kindergartens in Jakarta, Indonesia. 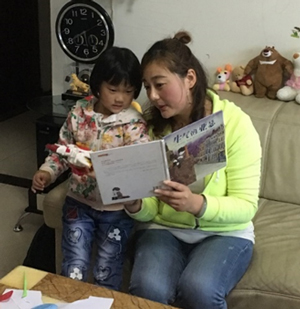 A mother and her child in Chengdu.
Children can understand a simple picture book even if it is written in Chinese characters. A mother and her child in Shanghai, drawing a picture together.
Profile:

Ms. Mochida is in charge of surveys and research studies targeting families with children covering the stages of pregnancy, through parturition and up to childrearing of infants. Her research articles include “Basic Survey on Pregnancy, Childbirth and Child Raising” and “Report on People without Children: About having a child.”
She conducts surveys and research studies, from the perspective of a quotidian citizen, focusing on the effects of changes in the mindset, life style and surrounding environments of people as they create a family and assume multiple roles as a family member.
Since 2016, she has been a member of a research team conducting an international survey on the “attitudes of learning to learn” in early childhood and family education.
Related Articles:
Latest Posts in this Category:
Search