Anatomy of Child Bullying in Japan 10: Effects of the broader definition of bullying

Anatomy of Child Bullying in Japan

The Ministry of Education, Culture, Sports, Science and Technology (MEXT) defined the term "bullying" for the first time in 1986, prompted by the bullying-related suicide of a 13-year-old boy. Hirofumi Shikagawa, a student of Nakano Fujimi Junior High School (as it was then called) in Tokyo, committed suicide after being bullied. On February 1, 1986, Hirofumi was found hanging in the public toilet at Morioka Station, Iwate Prefecture. This was shortly after a mock funeral ceremony had been conducted for him by a number of his classmates who had constantly bullied him. Hirofumi left a note naming the bullying students, writing that "My life is and will be a living hell." His suicide shocked Japanese society and became a significant social issue. Under such circumstances, MEXT introduced a new official definition of bullying and initiatives (please see "Part 1: Definition of Bullying and Its Transformation").

The original definition was composed of three elements: (1) bullying is a one-sided attack on someone weaker, (2) bullying is conducted repeatedly, and (3) bullying causes severe physical and mental damage to the victim.

Despite such government actions, bullying-related suicides have never stopped. The number of suicides by bullied children peaked almost every ten years in 1986, 1995, and 2005. To strengthen schools' ability to detect bullying behavior, MEXT has revised the definition of bullying. The number of bullying reports temporarily increased when a bullying-related suicide became the focus of public attention and gradually decreased over ten years. When people started to think bullying was declining, another suicide due to severe bullying in school took place and the issue came into the limelight again (see Figure 1).

Figure 1 shows the trend of bullying reports from the late 1980s to FY2012, including the Otsu case in 2011(Note), which stirred up significant controversy. Whenever a serious bullying case came to the forefront, MEXT was criticized for its inadequate response. Subsequently, MEXT employed the broader definition of bullying, aiming to increase schools' sensitivity in detecting even minor bullying behavior so as to prevent serious damage in the early stages.

Currently, the term "bullying" is defined as "Acts exerting a psychological or physical influence on a child that are committed by another child who has a certain personal relationship with the victimized child, and due to which the victimized child suffers mental or physical pain." As you can see, the elements of "power relationships" and "repetitiveness" under the original definition were excluded.

As the 2011 Otsu case was also a substantial shock to society, the number of bullying reports significantly increased in the following year. 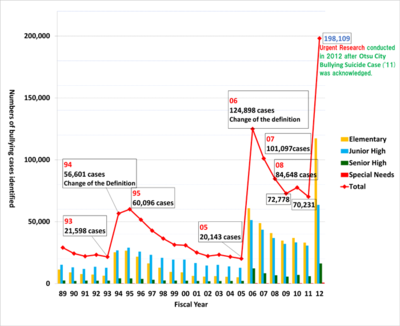 2. Necessity to verify the effectiveness of the broader definition

Is the broader definition of bullying really useful for the prevention and early detection of bullying behaviors? To answer this, we need to verify the effectiveness of the broader definition by examining whether the actual number of bullying-related suicides (e.g., bullycides) or serious bullying incidents decreased. However, if the investigation committee does not acknowledge that a child's suicide is due to bullying, such a death is not counted as bullycides. There are few suicide cases provable by a suicide note clearly indicating a bullycide or those objectively determined that the suicide is due to bullying. Therefore, we can assume that the number of actual bullycides is much larger than the number of reported incidents, although the actual figures are unknown.

Figure 2 shows the trend of bullying reports from FY2011 to FY2019. The number of reported incidents considerably increased in FY2012 and continued growing at an incomparably faster rate. This growth is most pronounced in elementary schools. 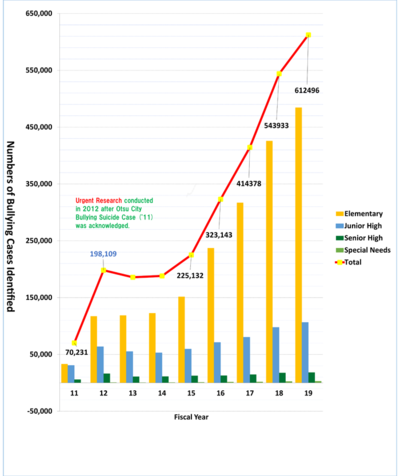 This is partly because it is easier to detect bullying behavior in elementary schools considering the current definition of bullying. In addition, young children in elementary schools are less likely to hide or hesitate to confess the fact of being bullied to teachers and parents compared to junior high school students. In contrast, teachers in junior high schools are more likely to stop pursuing the existence of bullying if students say, "There is no problem," trying to respect their autonomy.

Meanwhile, MEXT publicly commented that, "There is nothing wrong with increasing numbers of bullying reports; rather, this is a good sign showing that the school's sensitivity towards bullying is improved." This comment might have contributed to a rapid increase in the number of bullying reports from elementary schools.

3. Adverse effects of the broader definition

(1) A risk of lowering motivation to detect bullying

One of the adverse effects of the broader definition is that the schools' task of handling bullying reports that are rapidly increasing has become a considerable burden. In particular, teachers and administrative staff directly dealing with bullying reports must have felt burdened. This trend may impede their motivation to detect and resolve bullying issues as early as possible, although early detection can ultimately reduce their task of handling bullying reports. As teachers are fatigued, they may feel reluctant to implement new anti-bullying measures. There may be paradoxical cases where teachers feel burdened due to increased number of bullying reports and are less willing to discover new bullying issues, avoiding further burden. As a result, they overlook minor bullying incidents, which gradually grow into a more serious and challenging problem. In other words, there would be adverse effects where fatigued teachers with increased bullying reports are less likely to solve the fundamental problem of bullying. I hope this paradox is not spreading across the country.

While bullying reports are increasing, if schools can honestly and effectively respond to each bullying incident, their ability to detect and prevent bullying will be dramatically improved. However, if schools spend time preparing reports and do not take adequate and preventive countermeasures for fundamental solutions, their initiatives will not achieve a fruitful outcome. Therefore, it is crucial for schools to understand the essential nature of bullying and acquire capabilities to respond to and prevent bullying issues effectively.

So bullying reports increase, there will be no criticism against MEXT. Even if a bullycide occurs, no one would say, "Bullying reports are decreasing. So why did the student commit suicide?" On the other hand, however, there may be another criticism saying, "Bullying reports are increasing, but effective measures are not being taken to eliminate bullying issues." As a result, bullying reports may decrease again. In either case, the current extraordinary increase in bullying reports places an excessive burden on schools, in particular on especially elementary school teachers. Therefore, it is essential to ensure their cost-benefit performance.

Figure 3 shows the results of my questionnaire survey conducted in July 2019. This survey was intended to measure the degree of the burden faced by teachers in elementary, junior high, and senior high schools dealing with bullying-related tasks in addition to their daily duties. Teachers were asked to answer the questions such as "How much do you feel burdened and fatigued by handling anti-bullying measures in school?" on a 5-point scale (1= Strongly disagree; 2= Somewhat disagree; 3= Neither agree nor disagree; 4= Somewhat agree; 5= Strongly agree). There is not much difference between the scores of teachers in elementary schools and that of junior high schools. However, the question item "My hands are already full with my daily duties other than handling bullying issues which is burdensome" shows the highest score. 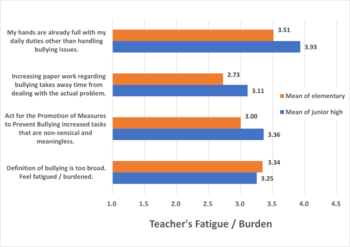 (2) Bullying dynamic is shifting from "Bullies vs. Victims" to "Mutual Bullying"

The bullying dynamic of "Bullies vs. Victims" is widely recognized in society. People think "Bullies are bad, victims are weak and should be protected." As a matter of course, no parent wants to hear that their child is a bully. If a bullying incident occurs, schools tend to report the incident by distinctively identifying bullies and victims. However, special attention is necessary when instructing the children involved and meeting their parents. As parents do not want their child to be labeled as a perpetrator, it may be challenging to have open communications with them if teachers force the conventional concept of "perpetrator-victim." On the contrary, teachers should keep in mind to give special consideration to bullying children, if they have hidden problems. Schools need to remember that every child and their family, whether bullying or being bullied, are valuable; none is expendable.

In addition, the current broader definition of bullying excludes the element of "one-sided attacks on someone weaker." This makes the categorization of "bullies and victims" ambiguous. As a result, there will be more cases where bullies are also victims and victims are also bullies. Therefore, I would like to suggest the concept of "mutual bullying," a new bullying format arising from the broader definition.

When dealing with bullies and their families, school teachers need to consider the possibility of "mutual bullying" and communicate with families instead of sticking to the conventional categorization of "bullies and victims."