A "Real" Writer Comes to School: An Author Visit Event at Our Junior/Senior High School

The inundation of electronic media that students are constantly exposed to poses an ever-increasing challenge to English teachers, and language teachers in general. While young people today may read text files or brief messages more than they did a few years ago, the amount of sustained reading students engage in is decreasing. Sustained reading is defined as the reading of a text, usually a book, uninterrupted over some minutes, and is seen as a basic academic skill to be built and honed over the course of their school years. The lack of time spent with books compromises students' efficiency in reading and their ability to comprehend longer works. Additionally, the lack of exposure to books in general results in decreased confidence and weaker writing skills in tasks where reading purpose and focus have to be maintained over several pages.

Because of the many benefits of reading, not the least of which is the language development at the heart of any English class, but which also extend to improved grades across the curriculum, it is crucial for educational communities to get students to read more. But how?

One recent trend in the English classroom is bringing published authors into schools and classrooms. When I was growing up thirty years ago in Chicago, such events were rare if not unheard of. Although the highly ranked public school I attended on the North Shore had extensive outreach, with guest teachers ranging from West African dance troops to symphony orchestra musicians, we never had an author visit our school. It seemed writers were consecrated to the hallowed halls of the public library, where they gave readings and talks to over-eighteen intelligentsia. Popular authors would appear at local bookstores for hob-knobbing and book signing as publicity events for their latest title.

However, a growing number of English-based educational systems across the world are now incorporating author visits into school programs, sometimes as one of the central pillars of the coursework, sometimes as an addition to the core curriculum. As our school receives a significant number of students from overseas, based on their experiences in International Baccalaureate schools and local schools in North America, the trend in recent years is clear: more schools at the junior and senior high level are including author outreach as part of their educational programs. Two-thirds of our students are returnees, or students who have lived abroad for a number of years, often in English-speaking countries. The English language ability of many of them is near or at native-speaker level. Inspired by them, and motivated further by the growing number of successful Japan-based English language authors writing for young adults, our school made the decision to have its inaugural author visit this year.

Because our main purpose for this first event was to give a wide range of students the opportunity to meet and learn from an author, programs were arranged for both junior and senior high students at a variety of times. Visits to single or joint classes during the day were supplemented by lunch time and after school events that allowed more students to attend presentations even when their class schedule did not allow for a class visit. While class visits let smaller numbers of students interact with the author, lunch time and after school events were very well attended, with about a hundred student attendees for each event.

We chose Holly Thompson, an American author based in Kamakura, to visit us for a day. Thompson's writing accomplishments and flexibility in presentations made her the best choice for this first event. She has authored several verse novels for young adults, one of which was released just the month before her visit. Her novels often have a cross-cultural theme, usually involving Japan. She also published a picture book set in Japan with Peace as a theme, and she edited an anthology of fiction to benefit young people affected by the Tohoku earthquake (Tomo). Brief introductions or references to her other works had much more effect on students' interest in reading those other books - books that had not even been discussed in class - than I would have thought possible. 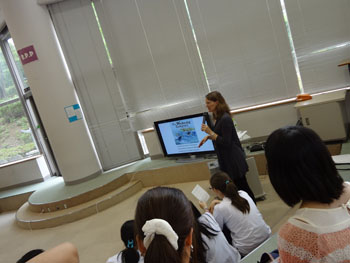 Thompson gave presentations for groups of thirty to over a hundred students,
and answered questions from enthusiastic readers afterwards.

For this visit, the school asked Thompson to give a series of presentations on various topics such as a specific book she has written or about the writing and publishing process in general. Presentations were followed by a question and answer session during which students had the opportunity to ask Thompson questions directly.

In hind-sight, it would have been more beneficial to take advantage of Thompson's expertise running writing workshops as well. Her extensive experience in this area - including a five-day Author-in-Residence at a high school in Thailand and running writing workshops at various schools and institutions in the U.S. - would have benefitted students greatly.

Although students did not finish reading any of Thompson's novels prior to her visit, they did read sections of various books she worked on, depending on their grade and class. While they read these sections willingly, few were motivated to read an entire book before the author visit. However, after Thompson's presentations, many students suddenly expressed an interest in finishing the books by Thompson that they had started. One reason for this enthusiasm was interest generated by hearing about Thompson's research. Another factor that piqued their interest was hearing the "secrets" of the story; that is, elements that had been left out or changed from the original story. This glimpse at the "backstage" aspects of the novel strongly appealed to students' curiosity.

Also, they were clearly shocked by the enormous effort Thompson put into writing each book she produced. Until they heard - directly from her - about the many steps of drafting, revisions, and negotiations with agents and editors that are part and parcel of the publishing world, most students were not aware of the vast amount of work that goes into a book. Students' most fundamental feelings about the significance of the works they hold in their hands as finished books changed after hearing Thompson's descriptions of her struggles in publishing.

In exit surveys, and more significantly in class discussions after the event, many student described a phenomenon perhaps best expressed as a "widening of worlds". That is, they understood ways people exist in the world that was beyond their previous knowledge. Many students previously had an image of authors working in isolation, sitting down every day at a desk where they spread words on sheet after sheet of paper. However, hearing directly from an author about the way she lives her life, the daily writing process and frustrations of long-term projects, along with the joys of meeting readers and her research experiences, gave students a more realistic view of - and certainly greater appreciation for - what goes into a published work. It amazed students to hear that Thompson actually took her child with her and worked in a farming community for over a year to research Orchards.

Yet beyond the author herself, the students gain knowledge of the places touched by the author's research: the people of a small village in Cambodia where Thompson went to research the background of a secondary character, the Cambodian dance troop in Massachusetts whose members corresponded with Thompson to share with her their culture and advise her on the realities of teenage love, the quadriplegic Thompson did volunteer work with who went on to write an entire book with only the movement of her eyeballs and inspired the character Zena in The Language Inside. Few students even imagined such people before Thompson's talk, but how they were part of their reality.

The fact that these other people exist in the world, in a reality so remote from our classrooms - yet closer now to students' in their own minds - was brought home to participating students. Somehow they could come to an understanding of these other people in the world, and with this realization their own worlds widened. And finally I thought: isn't this exactly what books are all about? To jump inside someone else's head for a little while, to find new perspectives and share the human experience? 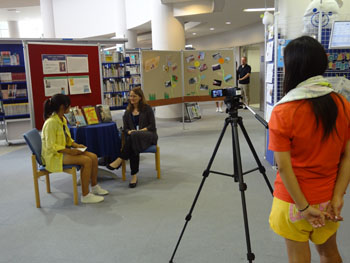 Students video tape an interview with Thompson for a student-produced news show.

Secrets of the Story

Of everything the students got from this author visit, as a writing teacher I was most thankful for Thompson's point about rewriting. The first submission of her most recent novel, The Language Inside, to her publisher received the searing criticism that her protagonist was "unlikeable". If the protagonist is thought by the omnipotent editor to have such a major character flaw, one can hardly imagine the amount of rewriting necessary on a project thought to be basically finished. Thompson, a true story teller, reveals this information to her audience as a "secret" about the book. She describes the original story, which is compelling enough to draw us in, but then explains that those points were changed in the final version. ("Changed? Changed to what?" students wondered. Thompson cleverly avoided any spoilers, but made students so curious about the published version that several classes requested that we finish the book.)

Needless to say, staring at the editor's oppressively negative view of the initial version without knowing whether the novel would or even could be rewritten and published, Thompson did a lot of - as she put it - "deep breathing". She took that first month off, she explained, and then went back to her desk. Thompson's go-to attitude (which came through vividly in her presentation to students) had her back reworking the story in just a few weeks. Her dramatic telling of this experience had the students' rapt attention. As Thompson explained it, this incident "...enables students to more deeply understand... the way authors collect ideas, experiment with them, discipline themselves to persevere, take risks, rewrite, revise and revise, and cope with rejections and still persevere." As a writing teacher, I took Thompson's point for its motivational value for students, to encourage tenacity in the throes of the often daunting rewriting process. Yet Thompson, a veteran of the Author Visit, sees the deeper meaning for students in their lives: the discipline and risk-taking, the ability to continue to pursue a goal even in the face of rejection are "...relevant and valuable life skills for all students," she writes. Clearly her message has significance far beyond the walls of the writing classroom.

Profile:
Sarah Ogawa
Sarah Wittenbrink Ogawa first came to Japan in high school as a short-term exchange student. After spending her junior year of college at Doshisha University, she returned to graduate from Smith College in Massachusetts. She moved back to Japan in 1992, where she has worked at a number of schools and in television. She is a faculty member at Doshisha International High School in Kyoto, where she lives with her Japanese husband and their two children. She has done graduate work in both science and the humanities, and holds a Master's Degree from the University of California.
Related Articles:
Latest Posts in this Category:
Search