TOP > Papers & Essays > Children in the Digital Age > Blogging at School: Using Blogs as an Educational Tool in English Classes

Blogging at School: Using Blogs as an Educational Tool in English Classes

What happens when a new technology brings about a complete change in the culture surrounding an art form? When photography - the exact copying of an image in physical format - became viable, Impressionism developed. When phonographic re

cordings and listening devises became commonplace, improvisational jazz - which by definition cannot be performed the same way twice - suddenly became popular. What does the current technological boom and Information Age mean for the future of the written word? Examples of books and even movies that began as blogs are now commonplace. Whole novels have been written on cell phones. Many of these writers and authors, including the most successful, are quite young. How can these technologies and trends be used in the language classroom?

For students in many parts of Japan and the U.S., communication through texting, blogs, and similar media is a part of daily life. However, until a couple of years ago these media were something I knew very little about. Students sometimes bring me novels with titles like ttfn or l8r, g8r. They contain dialogue like, "cya!" ("See you," my students translate for me. If we were characters in a texting book, they might continue: "omg!" and "nvm! coz ur so not with it." That would be, "Oh my God!" and "Never mind, because you are clearly not following this trend." One begins to understand the horror with which Bible-reading parents regarded fictional novels when that genre first became popular.)

In any case, I try to keep an open mind and use materials and activities that will interest and motivate while also educating my students, so I asked a friend who runs the E.W. Spider children's English education blog from Tokyo for some advice. She mailed me some links and pointers, and to my utter shock and amazement after only a couple of hours' work I had a blog for my class.

But Not for the Faint of Heart

Administering the blog was challenging at first. Using students' e-mail accounts I sent them invitations to join the blog and set them up as Contributors. The role of Administrator I saved for myself so that I would have complete control over everything published on the site, including comments. As Contributors, students can submit blog entries for review, and after I review them for appropriate content, comprehensibility, and general appearance and layout, I publish them. They appear on the site almost instantaneously. Comments on individual blog entries can be submitted by anyone, but again, as Administrator, I must approve all comments before they appear on the site. This ensures that the community created around the blog is not assailed by spam or unconstructive content or comments.

The blogs are free from a popular blog provider as long as we do not upload video. Uploading images, such as book covers and even power point presentations, is free. These capabilities served us well through this first year. However, we may upgrade for the coming year. In the very last class, one student presented a piece of creative writing that included text with a video element tacked on at the end. She deftly avoided the issue of video limitations by uploading the video to a popular video access site and placing a link to it in her blog entry. Readers can easily view the video element without navigating away from the site simply by clicking on the link.

While the final projects for the Creative Writing became, well... quite creative, we started by writing short stories. After writing a couple of drafts on their own, we took a class period for peer editing and then worked on a final draft. Students then read each other's stories and stories from the other creative writing class that were posted on the same blog. Reading one's stories - or even having them read by another person - aloud in class is daunting for adults but can be especially painful for adolescents. Thoughts of such scenes often trigger students' "inner editor" and leave them unable to write the best story they could write for fear of that risk. The blog format allowed them to share their work and also share their thoughts in what they seemed to feel was a more comfortable and intimate fashion. (The irony of this is striking; they are, in fact, sharing their stories with the whole world!)

Several surprising things happened. A football jock who prides himself on his non-academic aura wrote two of the most popular stories, getting lots of hits and almost twenty comments each (masterdickenson). Another student, a girl from China for whom English is a third language, wrote a poignant piece about taking her first international flight alone that resounded with many students (demonday).

Beginning second term, students tried to get themselves "hired" as freelance writers by submitting queries to other people's Web pages. Becoming familiar with the submission process was the main goal, but several students were actually successful. At the end of the year students tried to create a piece that would take advantage of the Internet as a medium. The resulting works included the aforementioned text paired with a video, an interlinked crossword puzzle and story, and other forms (Ogawa, DouKoku's Blog). 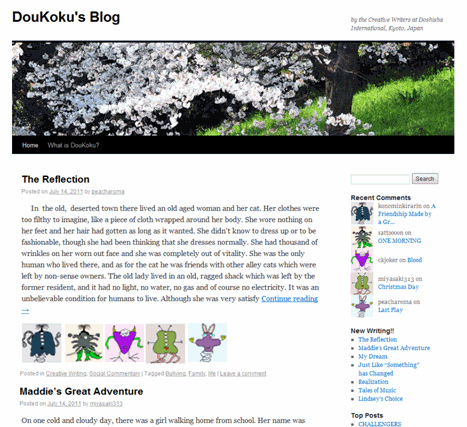 Blogs also became a useful tool in the native-fluency level reading course for the first time last year. Using the methodology pioneered by Nancie Atwell of the Center for Teaching and Learning in Maine, students select their own reading material (but books only) throughout the year. Once students are enjoying a story, the momentum of the plot keeps them reading, but the period between finishing one book and getting involved in a new story is perilous. The faster they can "get into" a new story, the more they will read. Students who flounder for a long period may have difficulty continuing a book even when they find a good match.

One of my most important jobs as their teacher is to help students find those good matches and facilitate their helping each other. At the beginning of the year, free talking in pairs and Book Talk presentations in front of the whole class were a couple of the ways that student book recommendations spread by word of mouth. While these were valuable for the human appeal that comes from having a person talk to you about something enthusiastically, they were not accessible by students in other classes or over a long timeframe. As they were not recorded in any form, they could not be searched by genre or reading level. Blogging allowed us to make book recommendations available to students in any class - and people in any country - while also preserving them, organizing them to enhance searches, and making them interactive by allowing feedback through the comments feature (Ogawa, Great Books by Doshisha International Readers).

The beauty of blogs is that the students can have virtually autonomous exchanges with each other. They can look at the entries of any other student and submit comments to as many of them as they wish. They can access the blog anytime, day or night, wherever a computer is available to them. The book blog site can be navigated by student pen name or genre in addition to standard searches. When I had students write book response notebooks in the past, students were limited physically to a one-on-one exchange; they would trade notebooks and read one another's entries. With a blog, students can search for all the mystery books other students liked, or they can check out what the cute girl in another class is reading. And they can send them both comments. Perhaps because blogging is something thought of as "fun," reluctant students are often some of the most active bloggers. During one class using computers, I looked over the shoulders of two of my less serious girls who were giggling with each other. They were both in the middle of writing comments, so I let it go. Later on, however, I was happily surprised to discover that they had each commented on five or more blog entries, and their comments were thoughtful ideas that showed they had read the entries carefully.

Finishing the courses in early March - when the school year ends in Japan - I left the blogs open. Would students' active participation in the blogs continue beyond the end of the school year?

Unfortunately, it did not. Whether it was because they were busy with spring training in club or because they were traveling, or if the new school year in April reset their brains I do not know, but other than a couple of kids telling me they checked the site and one person from America commenting on a book, all activity on the sites ceased. Can we make a blog this year that they will continue to peruse and pursue on their own beyond March? I am not sure, but we are going to try!

*ttfn is a young adult novel entirely written in text language. All exchanges among the characters are made through instant messaging. "ttfn" comes from the phrase, "ta ta for now," meaning "see you later".

*l8r, g8r is the sequel to ttfn, and is also entirely written in texting format or dialogue that occurs in virtual chat rooms. The phrase "l8r, g8r" is short for "later, 'gator", a reference to "see you later, alligator," a colloquial way of saying "see you later".

Sarah Wittenbrink Ogawa first came to Japan in high school as a short-term exchange student. After spending her junior year of college at Doshisha University, she returned to graduate from Smith College in Massachusetts. She moved back to Japan in 1992, where she has worked at a number of schools and in television. She is a faculty member at Doshisha International High School in Kyoto, where she lives with her Japanese husband and their two children. She has done graduate work in both science and the humanities, and holds a Master's Degree from the University of California.
Latest Posts in this Category:
Search