TOP > Papers & Essays > Children in the Digital Age > Education for the Net Generation - 4. Do virtual pets have positive effects on human beings? (2)

Education for the Net Generation - 4. Do virtual pets have positive effects on human beings? (2)

There have been many articles written on the development of web-based virtual pets; yet very little has been written about how people feel toward their virtual pet and how virtual pets influence people. Some studies have been made, such as one conducted by T. Chesney & S. Lawson (2008) on the impact of nintendogs. This is a study of a software-based virtual pet, and its effect on humans, in which the researchers insist that having a virtual pet has emotional effects, helping to raise self-esteem. Another approach by E. L. Altschuler (2007) is the use of a virtual pet as used by a child with autism in an attempt to find a linkage that enables the child to make contact with the real world.

Therefore, the purpose of this article is to conduct research focusing on university students to examine how they feel about web-based virtual pets, and what kind of effects a virtual pet would have after making conversation with it.

Within this research, we will seek to find an answer to questions in relation to what type of virtual pet students prefer from among the four types mentioned; whether students are attached to their virtual pet or not; whether a virtual pet can be a comfort to them or not, etc. in order to explore possibilities of the relationship between humans and virtual pets as well as to find ways to use virtual pets in the field of education.

I conducted a questionnaire on the following items to 128 students of University Y and University W, after having them chat with their pets. Students kept a record each day when they had conversation. Then students replied to questions at the end. Even if they had a pet, they were not obliged to play with it. Given around a month, students were to chat with pets for about a week in total.

Students were asked to make a record on the following items when they made conversation with their pet: 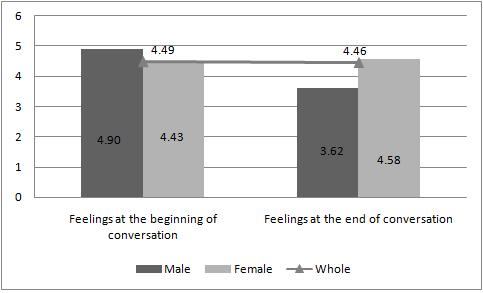 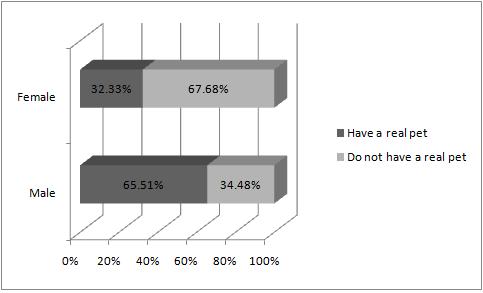 b. Conversation time with a virtual pet 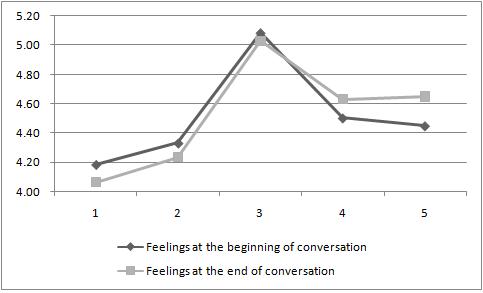 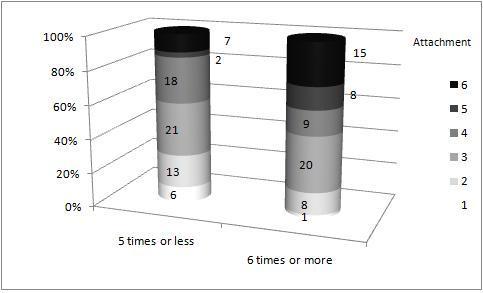 Figure 8. Frequency of Conversation and Degree of Attachment to Virtual Pets 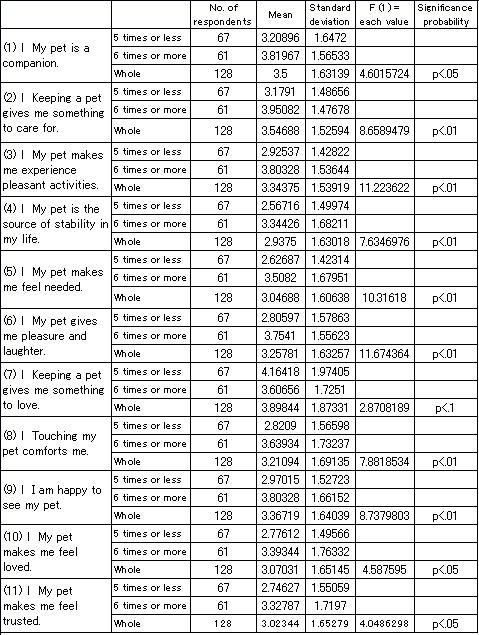 Table 1. Relationship between Frequency of Conversation and Degree of Comfort

(3) Impressions of the virtual pets

Figure 9 shows the result from the study in relation to how students feel about each type of virtual pet, with the average scores obtained from their answers.

Students were asked to rate their impression on a scale of one to six based on three responses: 'I have a favorable feeling towards my pet,' 'I feel an attachment towards my pet' and 'I receive comfort from my pet'. These comments refer to all four types of virtual pets (the mouse-driven type, the type randomly reading blog entries, the type using memorized dialogues, and the type talking and playing with an avatar). As a result, there is no significant difference in the scores for the first three types: however, the scores in all three questionnaires for the type talking and playing with an avatar are relatively lower for than other types.

In addition, through the variance analysis of scores for the questionnaire 'I receive comfort from my pet while chatting (Types of virtual pets are not particularly specified),' no significant differences were found by gender or by existence of a real pet (n.s.). 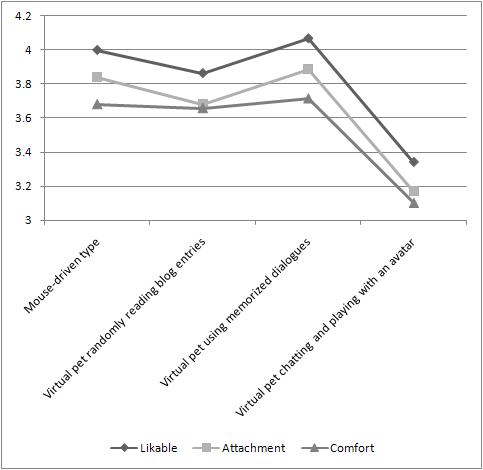 Next, I conducted a survey on what expectation students have of their virtual pet. I asked the students to respond 'yes' or 'no' to three statements regarding whether they expect to:

The result in Figure 10 shows that 85 percent expect a virtual pet to have a conversational function; on the contrary, however, 41 percent do not expect it to function with an avatar. 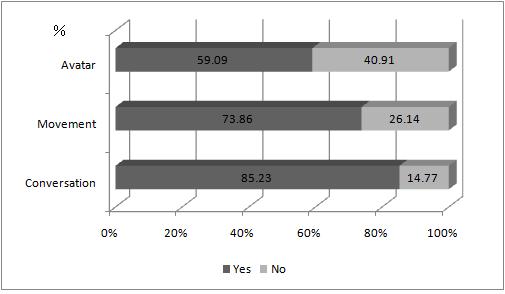 With a chi-square test, I have studied the relationship between the 'gender gap' and the individual factors of conversation, mobility and the avatar. Likewise, I considered these three factors in relationship to the 'existence of a real pet.' As a result, there is a significance in the relation between the question 'Do you expect to be able to control the pet's movement with the mouse cursor?' and the 'existence of a real pet' (X2(1)=5.06, p<.05). Also, the result in Figure 11 indicates that students who have a real pet expect more mobility of a virtual pet than those who do not have a real one. Other combinations by gender or the existence of a real pet do not show any significant difference (n.s.). 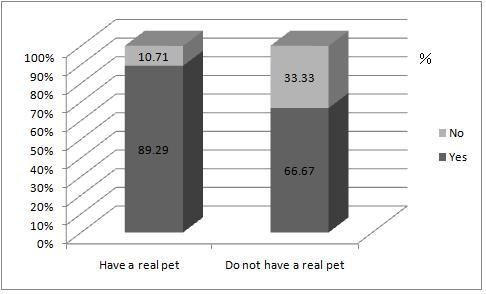 Figure 11. Relationship between Mobility and Existence of Real Pets

While conducting this survey, I noticed that some students felt uplifted after making conversation with a virtual pet, while others felt down; therefore, I have compared samples of each dialogue.

Studying these samples, it became evident that a critical factor in the responses is whether the students were successful in establishing interpersonal communication with their virtual pet during conversation. The dialogues shown in the sample below demonstrate that when students felt down, there is a gap in their conversation with their pet, since the pet is entirely unable to respond with the words the owner wanted to hear. In contrast, in dialogues where students felt uplifted, there is good communication, and furthermore, the pet can give its owner some comforting words such as 'Welcome home, my dear master,' a phrase that might come from an elegantly dressed maid in a cafe, where the maids treat their customers as masters.

The speech generated by the virtual pet is extracted automatically from the corpus programmed and stored into the database according to the situation given: the speech does not come from a voluntary behavior of such a digital pet. If the pet owner speaks to his/her pet with a phrase, and if this is within the scope of programmed dialogues, then the conversation will be established. However, if such a phrase has never been stored in the database, the virtual pet would not express any expected response, and the conversation becomes incoherent. 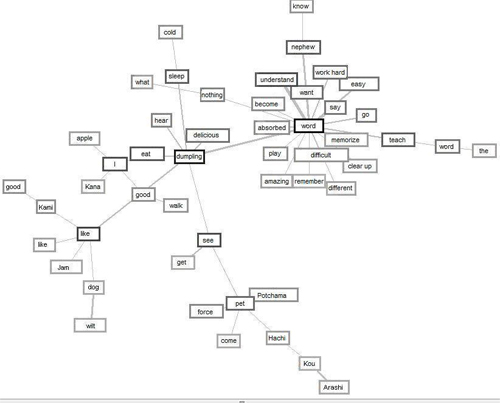 For further understanding of the communication between the pet owner and the virtual pet, I have carried out a text-mining approach using "Trend Search" software to analyze the words exchanged between them. The result of such mapping is shown in Figure 12. The color density of each frame surrounding a node represents the word frequency. The stronger the color of the frame the more frequently the node in that frame appears linked with other words.

This software program extracted three main keywords: 'word,' 'dumpling,' and 'like.' Among them, the 'word' is most frequently connected with other keywords, as shown in the phrase, for example, 'I don't understand the word. Please say it again with another simple word.' Thus, this keyword appears many times in the speech of the pet, indicating that the pet is asking its owner the meaning of 'word' again and again during conversation. It is quite understandable why the pet owners experienced frustration with their virtual pet.