TOP > Papers & Essays > Children in the Digital Age > Education for the Net Generation - 4. Do virtual pets have positive effects on human beings? (1)

Education for the Net Generation - 4. Do virtual pets have positive effects on human beings? (1)

In our modern world, as human relations become more attenuated because of the falling birthrate, the aging population and the trend toward nuclear families the number of children who constantly feel lonely is increasing. In the survey 'Child Poverty in Perspective: An Overview of Child Well-being in Rich Countries' conducted by the United Nations Children's Fund (UNICEF) in 2007, Figure 6.3b shows that 30 percent of Japanese children aged 15 agree with the statement 'I feel lonely'. This striking result makes Japan the highest-scoring country. In most countries, the percentage of 15 year-olds agreeing with the statement is 10 percent or less.

Japan is also well known for its high suicide levels. According to data from the World Health Organization, it ranks the ninth-highest among 101 countries in the world after Lithuania, Belarus, Russia, Kazakhstan, Hungary, Guyana, Slovenia, and Latvia, which are countries in a state of chaotic internal turmoil. In Japan, 24 out of 100,000 people commit suicide. If there were someone who could talk a person out of attempting suicide, the person might respond and relinquish his wish to die. However, today's poor interpersonal relationships inhibit people from consulting someone about their worries related to job loss, health concerns, bullying, etc. and finally they are crushed under such pressures to take their own life.

Against this background, I took up the notion of the 'pet' for consideration as a potential way to comfort and heal people in Japan where the suicide rate is so high.

According to the 'Survey of Public Opinion Concerning Animal Welfare' conducted by the Cabinet Public Relations Office in 2000, 36.7 percent of respondents have a real pet.* 1,387 respondents replied 'Do not have a pet at the moment'. Among these, the highest percentage giving the reason for having no pet (43.5 percent ) is 'Cannot give enough care'; another 37.6 percent of 'Feel sorry when pets die'; and 23.1 percent of 'Pets are prohibited as I am living in collective housing (not detached houses; e.g. apartments, condominiums, etc.)'. By region, the reason 'Pets are prohibited from being kept in collective housing' was cited by 41.2 percent of respondents in the Tokyo metropolitan area, the highest percentage, and by age bracket, by those in their 20's, then 30's. Meanwhile, the 'Survey on Time Use and Leisure Activities in 2006' conducted by the Statistics Bureau of the Ministry of Internal Affairs and Communications shows that the internet diffusion rate in the Tokyo metropolitan area is 70.8 percent, much higher than the national average of 59.4 percent.
- - - - - - - - - - - - - - - -

*The survey targeted 3000 people over the age of 20, with 2,190 responding. The method used was two-stage random sampling.

These studies indicate that people who find difficulty having a real pet are those living in collective housing, with good access to the Internet. The majority of these people are perhaps people living in large urban areas such as the Tokyo area, but also include students who live in collective housing such as an apartment or dormitory where pets are prohibited.

Having gathered this data, I then conducted a survey among students on the concept of having a virtual pet which they can adopt online, with a view to examining the outcome to determine whether a virtual pet would produce positive effects on those people who decide to adopt a pet in this manner.

Today, the role of pets is shifting from just being a person's favorite animal to one where the pet is considered a 'companion animal' (taking on the role of a dear friend or partner). Professor B. Gunter at the University of Leicester, U.K., focuses his research on the relationship between humans and pets from two aspects: educational and psychological. He states that a pet has three functions. Firstly, the function of mirroring the self-image of the pet owner: the choice of pet reflects the personality of the owner him/herself. Secondly, the function of caring for a pet is a kind of social lubricant: it influences the quantity and quality of owner's social situations that involve interaction with other people. Thirdly, the function of being the owner's companion or partner in which pets fill the gap in the human relations of the owner, and in an extreme case, can be a substitute for another human being.

The first function of mirroring an owner's self image applies to either a real pet or a virtual pet. There are various choices of virtual pets nowadays, even a choice of the characteristics of pets, which may enable a pet owner to choose a virtual pet more suited to his/her preferences than a real pet.

The second function of caring for a pet is not necessary for a virtual pet in most cases, but some virtual pets require feeding and care.

The third function of being an owner's companion or partner is less realized by a virtual pet, which may not fulfill this role as effectively as a real pet. However, whether the owner experiences a virtual pet as his companion or not is largely a matter of subjective perception and even though this perception may change in some situations, it is still possible to say that a virtual pet can take on a substantial role. In the real world, we often see the owner asking agreement from or talking to his or her pet. But the pet cannot speak out to reply, responding at best 'bow-wow' or 'meow.' Even so, the owner, after quarreling with someone in the real world, may attempt to justify herself to the pet, and although the pet does not understand and only responds with a "bow-wow," the owner often feels a sense of companionship.

Other researchers suggest that having pets can improve and maintain good mental health. It is reported that a relationship with a pet yields remarkable results among aged people with symptoms of depression in a nursing home (Mugford & M'Comisky, 1974).

A relationship with a pet is likely to become more important for humans in our modern society. The trend towards nuclear families, an aging population and a decreasing number of children increase the number of people who are living alone and experiencing a sense of solitude and loneliness. Although these people long to have pets, it is difficult for most of them as they are living in a condominium or apartment. Under these circumstances, a virtual pet comes into the picture as a substitute for a real pet. Therefore, I will study the relationship between humans and their virtual pets in our information society where we can reap the benefits of information technology.

For non-interactive virtual pets, mouse action is necessary for petting, feeding, etc. Figure 1 shows the example of a non-interactive, mouse-driven virtual pet. If you touch the cat with mouse cursor for petting, it meows and jumps down from the cushion to fetch a toy, or makes slurping sounds when eating and drinking if you give food or milk. 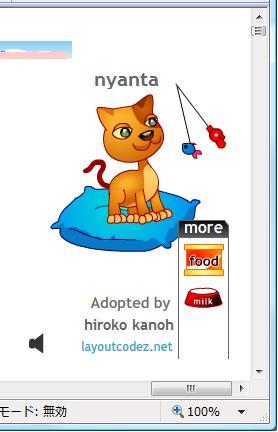 Interactive virtual pets can be classified into three categories. The first type is called a blogpet, as shown in Figure 2, which can be added to one's blog site. On the blog site, the blogpet randomly picks up some information from blog entries, all of which are archived, and displays it on the screen using a speech bubble as if the pet were speaking itself. 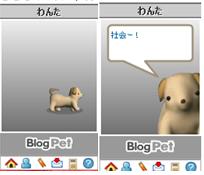 The second type is, as shown in Figure 3, a learning-type virtual pet. Like a blogpet, it can be added to blog sites or homepages, but blog entries are not used. Instead, it is only necessary to enter and archive every word or phrase in each situation to create a corpus of memorized sentences and phrases that correspond on a one-to-one basis, which are then displayed as dialogue. This creates the feeling of communicating with a real pet. If a word or phrase not memorized is typed, the pet will elicit more information by responding with the phrase 'I don't understand what you are saying!' 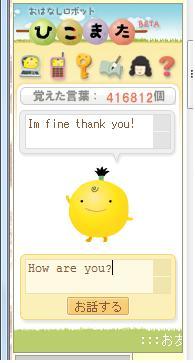 The third type of virtual pet interacts with an avatar (your representation in cyberspace), as shown in Figure 4, by talking, playing, etc. with each other. When one types 'I'm back!', the pet will respond 'Welcome back home!' The pet can always respond, even to a typed phrase not memorised which make this virtual pet different from the second type. Furthermore, the pet can understand some phrases such as 'Come over here,' 'Sit down,' 'Shake hands,' 'One more,' etc. and respond in action to each phrase. In these respects, it differs from the other types of virtual pets. 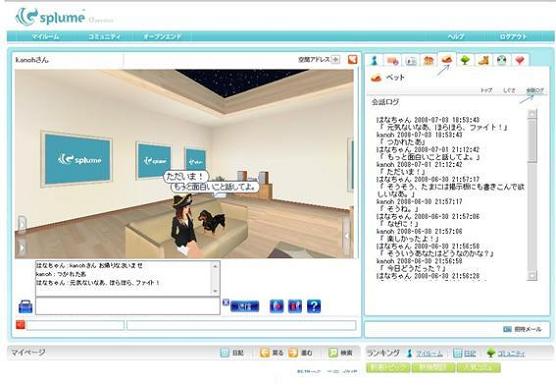 Figure 4. A Virtual Pet Interacting with an Avatar

Virtual pets are increasing to the extent that they are now common, as demonstrated above, on blogs and personal websites as a gadget.

Our next line of enquiry is to conduct more explorative research on how these virtual pets will affect humans.