Education for the Net Generation - 2. Survey of Children and Parents Concerning Internet Use: A Japan-U.S. Comparison (1) - Papers & Essays
中文
日本語

TOP > Papers & Essays > Children in the Digital Age > Education for the Net Generation - 2. Survey of Children and Parents Concerning Internet Use: A Japan-U.S. Comparison (1)

Education for the Net Generation - 2. Survey of Children and Parents Concerning Internet Use: A Japan-U.S. Comparison (1)

In the article Information Literacy, from the perspective of information literacy across the dimension of subjects, I have introduced some questions from the international framework of PISA that are used to monitor student's educational progress. Here, in my second article on the subject of children on the Internet, I will introduce a survey of children and parents in Japan and the U.S. regarding Internet use.

1. Hours and Activities of Children's Internet Use 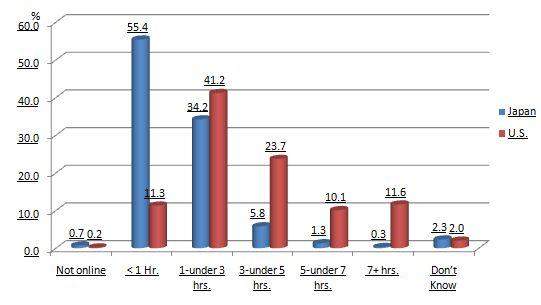 Figure 2 shows children's activities on the Internet. There is no significant difference between children in Japan and U.S in terms of buying items online, visiting chat rooms and bulletin boards, blogging, doing research for homework, and playing online video games. However, about 80 percent of American children said they download music, while less than 50 percent of Japanese children responded 'yes' to this question. Similarly, about 80 percent of American children use the Instant Messenger (IM) and 70 percent use the social networking services (SNS), but for Japanese children, only 20 percent use IM and 10 percent use SNS. 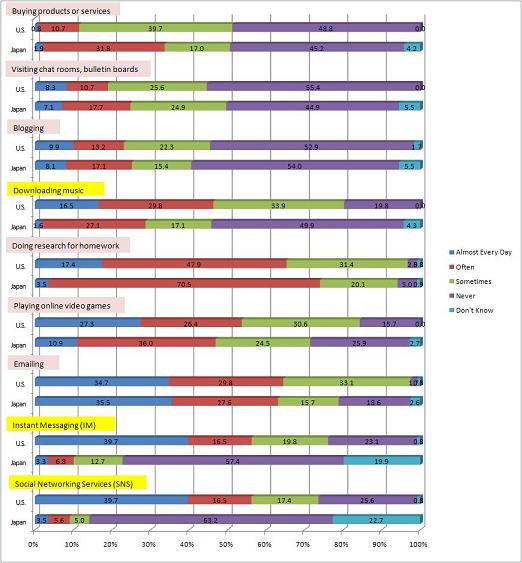 Above surveys show that Japanese children do not use the Internet as long as American children and they do not use the services like IM, SNS and downloading music as frequently as American children. However, children are exposed to various risks when they go online which is of another concern to parents. Figure 3, 4, 5 show the results of the survey, through the use of a questionnaire, on parents and children. The following questions were posed to parents and children respectively, 'Has your child ever had the following experience on the Internet within the past one year?" and 'Have you ever had the following experience on the Internet?' The question in Figure 3 relating to cyber-bullying; children were asked whether they had any experience of being bullied via emails, chatting rooms, instant messaging, etc. and parents are asked whether their child had such an experience. Figure 3 shows that a higher rate of children both in Japan and US responded 'yes' compared to their parents. Apparently, there are parents who do not know their child has been the subject of cyber-bullying. Also, it shows that 17.4 percent of American children were cyber-bullied while only 3.3 percent of Japanese children were, therefore, it can be said that the cyber-bullying is still a minor trend in Japan. 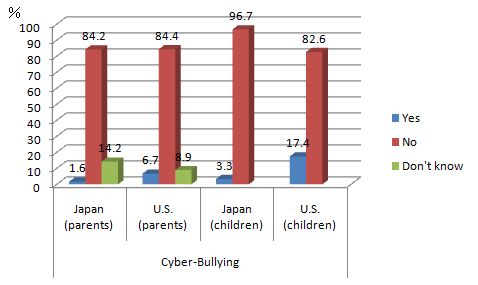 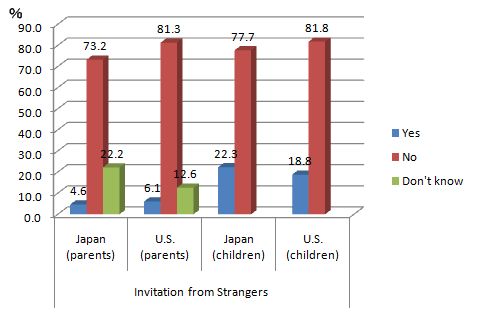 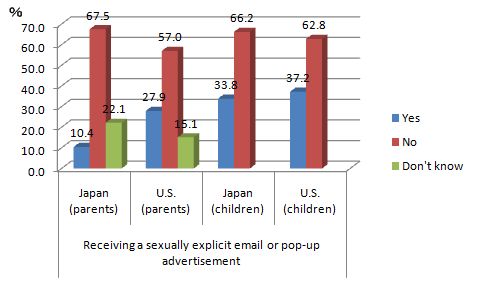 There are fewer discrepancies of knowledge between parents and children in the U.S. compared to those of Japan concerning a sexually explicit email or pop-up advertisement. A considerable number of Japanese parents do not know their children have seen such an email or advertisement. Therefore, parent's commitment to understanding their children's online activities should be an issue that needs to be addressed in the future.