Singapore's total fertility rate (TFR) has gradually declined over the past three decades and is now lower than that of Japan. To avoid becoming an ageing society, the Singapore government is making every effort to encourage more Singaporeans to get married and have children while integrating suitable foreigners. Compared to other nations, these policies are quite unique to Singapore. There are valuable lessons that Japan can learn from an island country of multi-ethnic society with only 45 years of history. Being a small nation with no natural resources, Singapore is well aware that human beings are its only resource, and is determined to nurture the future generation. On the other hand, since its independence, the country has declared that it does not aim to become a welfare society, which would financially burden future generations. The Singaporean method is a compromise of childrearing support systems that are based on self-help endeavor.

The total fertility rate of Singapore in 2008 was 1.28, which is lower than that of Japan, 1.34. The problem is even more serious for a small nation. Soon after the country separated from the Federation of Malaysia in 1965, it experienced a population explosion. The government had campaigned "Two is enough, stop at two" till early 1970's. At a certain period, it even promoted sterilization to already large families. However from the year 1976, the birthrate dropped to below 2.0, the criterion figure to keep the population level, and it showed a steady decline to below 1.3 since 2003. This fact alone is an indication of a population decline and rapidly ageing nation. However, the national census every decade shows a steady 20 % increase (Figure 1). This is due to the active integration of foreigners into the country. The government welcomes young people of a high educational background or those with high-level skills as new Singaporeans while paying careful attention to the ethnic proportion (Chinese: 77%, Malay: 14%, Indian: 8%) and birthrate of different ethnic groups. People have to provide detailed personal information, i.e. educational level, language at home, ethnicity, and their residential status at the time of the national census so the government can make full use of the statistics for national policymaking. Singapore does not have the family registration system comparable to Japan's, and people are required to provide detailed information on their personal background at the time of marriage registration. That enables the government to predict demographic movement and introduce various policies in a timely manner (Figures 2.3). 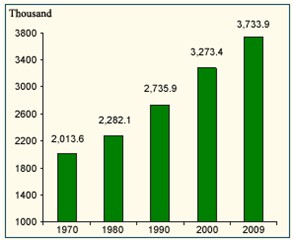 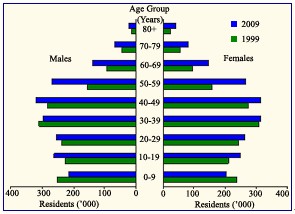 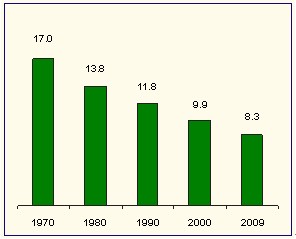 The best solution for safe and stable national development would be to encourage Singaporeans to get married and have children. The country introduced a marriage and parenthood package, childrearing support systems and various subsidies or revised the old ones to make a family friendly environment based on feedback from its people. As Singapore makes it clear, it does not aim to become a welfare state, people are expected to make efforts to improve their lives themselves. This policy is derived from a concept different from America's voluntarism. Being a small island country, the statesmen are well aware that using financial resources for this reason will be detrimental to future generations and national well-being. For the last 45 years of nation's history, only three people have served as prime minister of Singapore: Lee Kwan Yu, the founding father; the second generation, Goh Chock Tong; and Lee Sheng Loon, the eldest son of Lee Kwan Yu. Singapore is a democratic country, but it has been ruled by the single party, People's Action Party (PAP)for the past 45 years. Young brains are trained in the party and the reins of the government are passed down to its younger generation. Among various systems, the paper focuses on the baby bonus, a cash distribution system and the childrearing support.

The baby bonus scheme (Table 1) was first introduced on April 1, 2001 and first revision on August 1, 2004, and the second, August 17, 2008. The scheme consists of two parts: a cash gift (deposited into a bank account in four equal installments), and a co-saving matching contribution in the Children Development Account (CDA). Parents first have to open the child's CDA. The government will match dollar-for-dollar the amount of savings the parent(s) contribute to the child's CDA up to the maximum amount by the year the child turns 6 years of age. The money could only be used for that particular child and for educational purposes by the first scheme. The first revision made it possible not only for educational purposes but for health insurance and also allowed that the total amount of all children of the family could be used for the designated purpose. In the second revision, the cash gift for the first and second children was raised from $3000 to $4000 and the scheme extended to the fifth child and beyond.

Restricting the savings account to certain purposes for the children ensures that the amount is invested only for children. As government contribution depends on the parents' amount saved, it encourages parents' self efforts. The mechanism of the system is quite different from the comparable system in Japan, which gives a cash gift to anybody who has children to raise without any restriction on expenditure. The Singapore system conveys the government's determination not to waste a penny of precious tax money and to ensure that it is invested for children and nothing else. 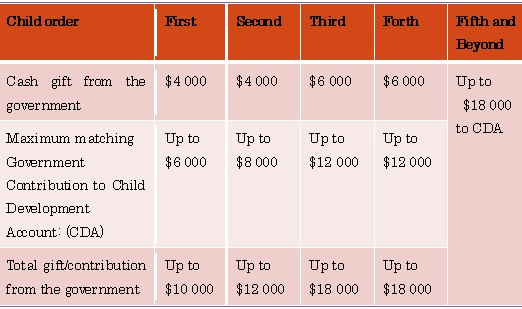 Claims are often heard from the parents in Japan that they cannot secure a space in child-care centres. When the author lived in Singapore with small children about 20 years ago, she was exactly in the same situation. In the early 1990's, daycare centres accepted children over 24 months. Working parents in those days had a choice of depending on relatives, un-licensed private care-takers or foreign domestic helpers until children reached the qualified age. Parents had to apply to several care centres in advance in order to place their children in a centre of their choice. The intake age restriction was lowered to 18 months from 1992, and from 2003, a certain number of childcare centres have facilitated taking infants from 2 to 18 months. Parents using infant care centres are subsidized by their status (Table 2). Recently, the available intake number outnumbered the actual number of children, and parents now have a wider range of choices in Singapore. The private family carers are all trained at designated daycare centres and registered. Parents are referred to carers through the Ministry of Community Development, Youth and Sports (MCYS). Even these days some parents ask for help from relatives or hire foreign domestic helpers whether both parents are working or not. The government encourages all parents to place their children to daycare centres for pre-school education by giving subsidy to all parents when children are placed in daycare centres (Table 3). 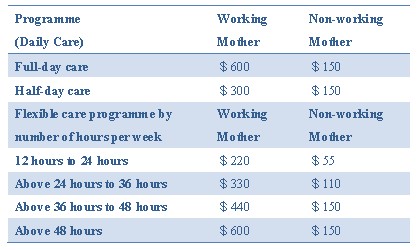 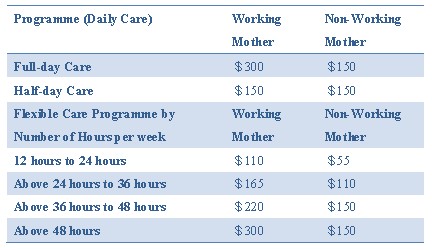 The subsidy is not a cash flow to parents but the designated amount is distributed to centres, and parents are to pay the amount deducted from the total care and tuition fee. All pre-school facilities are privately run in Singapore and the care/tuition fees vary depending on their facilities and programmes. The subsidies apply to both working and non-working single-fathers as well. For working single-fathers, the subsidy is half that of working-mothers and the amount for non-working single fathers is the same as that for non-working mothers. Further, the subsidies and support scheme are only for Singapore children, either citizens or permanent resident status holders. Singapore citizens or PR holders have an obligation to serve in the National Services for a certain period, which means they will reciprocate by serving the nation's security.

What the author has explained here focuses only on the Baby Bonus and Co-saving scheme which promotes having children, and the Child Care Subsidy which ensures that every single child will receive pre-school education. With many other various support systems, the Singapore government is vigorously involved in Singaporean family planning. Although the total fertility rate does not show much improvement, it seems the Japanese government has much to learn from the Singapore methods, in particular, the self-effort that it encourages and its unwillingness to place the financial burden of these subsidies on its future generations.