Why is Enhancement of Child Rearing Support Required Now? What Kinds of Support Services are Required? - Projects
中文
日本語

TOP > Projects > Declining Birth Rate and Child-rearing in Japan > Why is Enhancement of Child Rearing Support Required Now? What Kinds of Support Services are Required?

Why is Enhancement of Child Rearing Support Required Now? What Kinds of Support Services are Required?

(1) The child rearing environment is still austere for parents, although more effective child rearing support services are gradually becoming available for those families with infants.

(3) It is also important to establish a new form of child rearing support, which involves the recruitment of local residents

Note: The above-mentioned lectures were delivered in December 2014.

Child rearing support systems offered by the government and local municipalities are becoming more efficient in recent years, offering services that support families with young children. However, listening to the voices of those parents reveals the harsh child rearing environment that they face whilst bringing up their children.

The Austere Child Rearing Environment for Both Stay-at-home Mothers and Working Mothers
For example, stay-at-home mothers are suffering from "isolated child rearing" syndrome, a common phenomenon faced by mothers for the past 40 years. One of the mothers commented that "I feel like I'm running a 24-hour convenience store alone." A number of mothers are also concerned about their own prospects as to what they would do after their children grow up and leave their home. According to the survey conducted by the Benesse Educational Research & Development Institute, about approximately one in four mothers, who are bringing up children aged between 0 and 2 years, have no one to discuss the concerns they face with regards to child rearing *1. The report reveals that the mothers are continuing to experience the "isolated child rearing" problem.

In contrast, working mothers in metropolitan areas need to start searching for a childcare facility even during pregnancy, since they face long waiting lists for children to enter day-care centers. Childcare leave up to twelve months after childbirth is guaranteed under Japanese law (or up to eighteen months, if the parents cannot find a childcare facility that accepts their child). However, since day-care centers admit children sporadically and only when they have vacancies, a high proportion of mothers tend to give up their childcare leave before expiration of the allotted period so as not to miss the window of opportunity to send their children to day-care centers. In addition, 26.1% of female employees who resigned before/after their pregnancy and childbirth left their career due to the difficulty involved in managing both work and childrearing, even though they wished to continue working after childbirth using a childcare facility *2.

*1: "The 2nd Basic Survey on Pregnancy, Childbirth, and Child Raising" by Benesse Educational Research and Development Institute (2011)
*2: Data from "Comprehensive research on the issues regarding support for both work and childrearing" by Mitsubishi UFJ Research and Consulting Co., Ltd. (2008)

The Issue of Child Rearing Support is Most Urgent
The worries and internal conflicts of these mothers are very serious issues, which should be addressed urgently. If no steps are taken, the already very low birthrate in Japan is likely to worsen in the future. In particular, the majority of second-generation baby-boomer women will reach their childbearing age limit in the next few years. Of course, the major premise is to respect their choice to have a baby or not. However, prompt support is necessary for those who wish to have a baby, since survey results indicate that a five year delay in providing such support could bring about a decline of three million people in population per year *3. These child rearing difficulties like the long waiting list to be admitted to day-care centers, is very likely to prevent women from taking an active part in society.

Child rearing support is not only a key preventive measure for halting the declining birthrate in Japan, but also the most pressing issue for those children who are in the midst of growing up and their parents. The Japanese government has been addressing the issue of declining birthrates by spending more than a quarter of a century working on it since the "1.57 shock" in 1990. As a consequence of such long-term effort, the "Comprehensive Support System for Children and Child-rearing" (the "New Support System") will start in 2015. However, considering the fact that children born in 1990 will become 25 years old this year, it is glaringly obvious how important it is to support the children now.

Both "Quality" and "Quantity" Needed for Child Rearing Support
It is expected that the 2015 New Support System will provide enhanced child rearing support services in terms of quantity as well as quality. The consumption tax, which is the main fiscal resource behind the New Support System, was raised from 5% to 8% in April 2014. The extra revenue generated by this increase will be spent on enhancing the "quantity" of childcare services, that is, to solve the thorny issue of wait-listed children. Meanwhile, the anticipated additional 2% increase in the consumption tax rate is expected to be the permanent fiscal resource behind enhancing the "quality" of childcare services, such as improvements in the number of childcare workers per facility, their working conditions, reducing the number of children allocated per childcare worker, training subsidies, etc. Now that a governmental decision has been made to postpone the additional increase, it is necessary to reconsider the child rearing support plan, by clarifying the items which will be enhanced by the effect of the 3% tax increase, and those by the anticipated additional 2% (as of December 9, 2014).

Child Rearing Support without Relying Only on Tax Resources
In the future, we will need to find a way to provide child rearing support in local communities without relying only on tax resources. It would be ideal if the government, local residents, NPOs and companies would cooperate with each other in creating new systems and public open spaces for child rearing support.

For example, since 2004 the NPO Ai-Port Station, for which I serve as the head director, has provided training for people who are engaged in child rearing/family support services in local communities. The training includes the latest advanced curriculums regarding early childhood education and childcare as well as local child rearing support services. We also provide backup services after certification. The Ai-Port Station provides childcare services regardless of reasons for needing the service 24 hours a day throughout the year, as well as temporary childcare services by sending out staff members to visit families at home. "Concierges" are also there at the Station where mothers congregate, by listening to their stories and giving advice and explaining the contents of child rearing support services available in the local community. Some Baby Boomer men, who have reached their retirement age, joined the Ai-Port Station over the past two years; ideally men and women of all ages should be working together for child rearing/family support in the community. Through the work that we do at Ai-Port Station, I would very much like to demonstrate that local people who are willing to help others can be connected to many parents with young children in need.

I believe that the philosophy of child rearing support is necessary in the current society of Japan. In Sweden, a social welfare state, I heard that there is a certain type of philosophy called "Omsorg." The essence of the philosophy is that every life is full of joys and sorrows, and sharing our sorrows with each other will enrich our lives, communities, and the entire society. The philosophy highlights that helping someone in sorrow will bring us greater joy and happiness; I hope we can learn a lot from it.

I am working as Director of the ECEC center "Kodomonomori" in Matsubushi-machi, Saitama Prefecture. The ECEC center takes an important role in providing child rearing support services in local communities. Through our role as the ECEC center, we eventually came to realize the necessity to provide support for anxious young parents bringing up their first child, in particular. I would now like to introduce some of our activities.

Mothers Listening to Childcare Workers' Approach to Children at the "Childcare Salon"
We opened the "Childcare salon for children under three years old", so that mothers could just drop by, holding their babies. The salon is held once a month on a reservation basis for mothers with babies aged between 0 and 2 years old who can hold their heads up and are not attending day-care centers. We do not put on regular fixed activities, but simply offer a place for mothers to mix with other mothers who are bringing up children of similar age. In the last 30 minutes of the playgroup session, mothers can chat freely with others. When mothers realize that they are not the only one with worries and concerns in child rearing, they often feel relieved. This is particularly true for mothers coping with their first child.

For mothers with children aged three years and older, we host another playgroup "Childcare salon for children over three years old," targeting mothers with children not attending day-care centers and kindergartens. In this playgroup, the mothers and children get involved in activities with predetermined themes such as craftwork or cooking. We also let them play in our play yard, to give them experience playing with kindergarten children, which is somewhat more organized than just playing in a park. Some mothers take notice of how the childcare workers talk to their children. If a child insists "I wanna play more!" when they are about to leave, the mother is likely to feel irritated, but the child may suddenly calm down when a childcare worker talks to him or her with warm eye to eye contact. The mother is, quite often, surprised by this. Just by watching how the caregivers talk to children, I believe that the mothers will find useful tips for their own child rearing.

Child Rearing Support Means Supporting Parents
We believe that child rearing support means supporting parents. We consider it very important to stay close by the parents, instead of extending a helping hand to parents from above as a support provider. It is ideal for the childcare workers themselves to mature as caregivers by sharing the emotions of mothers together. We are also trying to create an environment where mothers can consider their ways of communicating with their children, such as in the case of the mother surprised by the way the childcare worker talked to her child, as explained above. We feel that such an environment will lead to support parents in child rearing. In the future, apart from child rearing support, we hope to create a place to welcome all generations, from infants and elementary school students, to mothers and elderly people, in our Kodomonomori Center, which can serve as a hub of local communities. 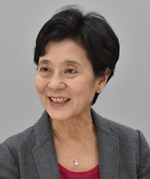 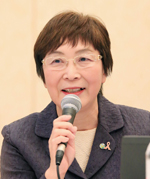 Kiyomi Wakamori
Director of the ECEC center "Kodomonomori", Chairman of the Saitama Childcare Professional Association, and a part-time instructor at Hakuoh University.