TOP > Projects > Declining Birth Rate and Child-rearing in Japan > Helping Mothers and Children at the Beginning of Childrearing: Continuous Support for Pregnancy, Childbirth, and Childrearing (3)

Why I started a postnatal support business -- My wife told me she couldn't think of having a third child...

I own a business in Tokorozawa city in Saitama prefecture that provides household and childrearing support, mostly targeting families during pregnancy and up to six months after childbirth. I love children by nature, and when my first child was born in 2009, I regarded myself as ikumen -- a father and husband actively involved in childrearing. I used to be an office worker from Mondays to Saturdays, and took numerous photos of my child on Sundays. On weekdays when I managed to return home at about 9 p.m., I'd play with my child who was being put to sleep, and ask my wife to bring my supper. I thought I was being a good ikumen father and husband back then.

I wanted to have many children and I was excited when we discovered my wife was pregnant with a second child. Then she told me, "I don't have confidence to raise a second child. There is no way to have a third one! To begin with, you are the child who needs the most care." She went on to say that she would decide whether she would acknowledge me as the father of our children by making me write a blog in which I would interview her about her health condition every day after childbirth. She would give her evaluation by reading the blog after a month. My blog "Osan to Ossan: Childbirth and a Middle-Aged Man" began this way. Many people including practicing midwives read it. It received a lot of feedback and was published as a book.

Such comments by my wife astounded me. What I thought I was doing as ikumen was not accurate at all. This was the catalyst for starting Mama no Wa (Mothers' Circle) in 2012, a business offering household and childrearing support for mothers before and after childbirth.

There is not enough support during and after childbirth

I came to realize a few things after my second child was born. Mothers receive care during their stay when they give birth at hospitals. When babies grow a little older and it becomes easier to go out, childrearing support services are available at childrearing support centers. Yet there is not enough support for mothers during the so-called puerperium, which begins right after they are discharged from hospitals. Mothers during this time do not have enough support despite the fact that it is an important period when they need to recharge for the upcoming childrearing. Thinking that I wanted to help out, I started the business.

Family members are not enough to provide postnatal support

Newspapers increasingly cover the topic of postnatal support, but awareness in public is low. Some say, "Isn't it the same as a housemaid or babysitter?" or "It's none of my business because I'll be going to my parents to prepare for childbirth and staying a while afterwards."

Nowadays, postnatal care cannot be provided only by family members. Speaking of my experience, my wife's mother was supposed to stay with us for a month after the birth of our second child, but her stay ended within a week. She became too tired taking care of the elder child who wanted to be carried all the time, and regarded it as a thankless job. The "Survey on Prenatal/Postnatal Life and Support" also indicates that the top ranked reasons why mothers do not use external support are: "Did not know the content of the support services," "Felt awkward and had concerns using support services," "Did not know that support services existed" (Figure 5). From my experience of operating the business, these people also are often not aware of support systems provided by pediatric clinics, child guidance offices, health centers and local municipalities. On the other hand, information is now burgeoning, and there are cases where people find it difficult to access relevant information. Even from this perspective, it is very important to provide appropriate information to mothers before childbirth. The role of "mother and child health coordinator" is significant. However, I think people without such qualifications can also provide information.

Figure 5. The reasons for not using external support services

Click image to enlarge
* Multiple answers
* Respondents who did not use an external support service (n=1,404).
* External support service: babysitting or home helping services provided by local municipalities, private sectors, and NPOs. Includes service targeted only after childbirth and without limited time-periods.
Source: "Survey on Prenatal/Postnatal Life and Support" by the Benesse Educational Research and Development Institute, 2015

Mama no Wa (Mother's Circle) received enquiries mainly from mothers themselves at the beginning. The numbers of queries from fathers (partners) in the last few years, and from the mother's mother, are also increasing. It is ideal that various people recognize postnatal support, have access to it, and share information with mothers to collectively consider what support they need. 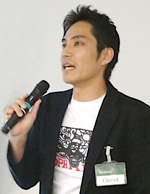