We here report about the development of a complex executive function skill--planning, pre-requisite child and family conditions that promote it and the future academic achievements that are associated with it. In a study of about a thousand children from across the United States of America, it was found that maternal education, through its effect on parenting quality when children are four and a half years old, is linked to the children’s performance on tests of verbal memory, sustained attention and inhibition taken at the same age. This performance predicts planning skill measured when the children are about 6 years of age, and planning performance predicts reading and math achievement at age 8. This path is also found when planning skill is measured at age 8 and achievement is measured at age 10.

One important human characteristic that parents and teachers help children acquire is the ability to plan rather than respond to the immediate situation without deliberation. Plans are mental representations of what we want to do and what we are emotionally committed to doing and their implementation requires skills that are known as executive function. It is self-evident that the ability to set goals and to use strategic methods to reach these goals are important for successful functioning. For that reason, parents, teachers and researchers want to understand how planning develops and what factors influence it.

The scientific study of planning has evolved from its early focus on adult skills. The research on grown-ups focused on the processes of planning but ignored possible social influences on planning skill. However, as research shifted to focus on children's planning, the researchers became interested in familial conditions that might influence planning and in the possible links between planning skill and academic achievement. However, until now, there was no research on how family and child characteristics work alone and together to make a difference in children's planning skill. Neither was there research on how planning is linked to reading and mathematics achievement over time in the same group of children.

We report here on recently published research that represents a broad, integrative look at the development of planning in middle childhood. Researchers discovered the extent to which maternal education and parenting alone and in concert contribute to children's memory, attention, and inhibition (three known basic cognitive skills) and how those skills uniquely and together affect planning, which, in turn affects academic performance. The discoveries were made possible thanks to repeated assessments of a large number of children over time and thanks to sophisticated analytical methods.

Participants in the research were 1,364 families with healthy children (705 boys and 659 girls) from 10 locations from across the United States of America. The study participants were similar to the population of families with young children residing in the communities from which research participants were recruited. However, parents in the study had higher than average education levels. At the same time, families were more likely to be on public assistance and had slightly lower household incomes than the average for their geographical regions. The families were seen from the time the children were born through the children's adolescence but the research on the topic of planning focused on the period from preschool and through fifth grade.

The researchers evaluated the families and the children with well-known, valid and reliable methods. The measures included:


1. Tower of Hanoi, a task that assesses planning. The task requires the child to think ahead and develop a sequence of moves to transform an initial configuration of rings on the child's set of pegs into the pattern shown on the tester set of pegs. The child is asked to reach the goal in the minimum number of moves while obeying rules of the game that require moving only one ring at a time and placing no ring on top of a smaller ring.

3. Woodcock Johnson Tests of cognitive and academic achievement that provided assessments of memory and of academic achievement. Short-term memory was assessed with a sub-test called Memory for Sentences. It measured the ability to remember and repeat phrases and sentences of varying length. Reading was assessed with the subtest of Letter Word Identification and the subtest of Passage Comprehension. Mathematics achievement was assessed with the Calculation subtest and the Applied Problems subtest. The Applied Problems subtest requires the child to analyze and solve mathematics problems. Many of the problems include irrelevant information. The child needs to select not only the appropriate mathematical operations to use, but also which numbers to include in the calculation.

4. The Home Observation for Measurement of the Environment that assesses the physical and social resources available to the child from objects, events and transactions occurring in the family surrounding.

5. The Observations of Mother-Child Interactions that measures maternal sensitivity. The latter was rated from interactions during challenging and pleasurable tasks. The interactions were coded for maternal supportive presence, hostility (reverse scored) and respect for autonomy.

Measures # 4 and # 5 were combined to assess of parenting quality. Evaluations were conducted at multiple time points as children grew up, allowing for analyses of change over time. 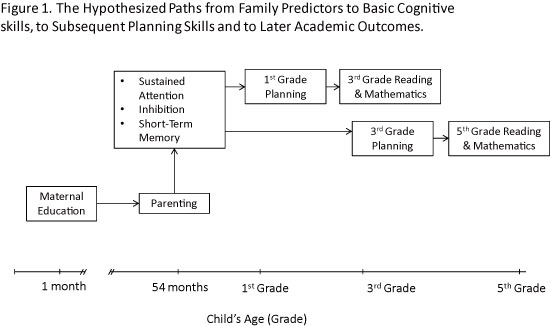 As predicted, children with better cognitive skills at age 4.5--short-term memory, ability to sustain attention and inhibit responding to non-critical information--were also better planners in subsequent years. Children's level of planning ability was not affected directly either by maternal education level or by the combination of the quality of the home environment and the mother's sensitivity (combined and labeled "parenting"). Instead, these two predictors had their impact indirectly. Maternal education affected the quality of parenting, with higher maternal education associated with better quality of parenting. Higher quality parenting was associated with more mature basic cognitive skills (memory, attention and inhibition). Higher levels of basic cognitive skills was linked to greater skill in planning. Also, as predicted, higher quality parenting when the children were 4.5 years old was associated with faster improvement in planning over middle childhood. These important findings don't tell us, however, which specific aspects of the family home environment and of maternal sensitivity affect the level of planning skill and the rate of its development. Other studies may have a chance to focus on such details and to inform interventions aimed at helping families support children's acquisition of better cognitive and planning skills.

The findings from this study show how maternal education, the quality of parenting, children's basic cognitive skills, children's planning skills and children's academic achievements are all interconnected. The process that leads from maternal education to children's academic performance in middle childhood, builds on the quality of the home environment and maternal sensitivity, which are external to the child. The process also builds on children's cognitive skills that are personal characteristics that are at least to some extent shaped by the social environment that children are immersed in. While the process probably occurs at each and every stage of development, it also occurs over time, as demonstrated by the study that is described here.

Sarah L. Friedman, Ph.D.
Dr. Friedman received M.A. in Educational Psychology from Cornell University and Ph.D. in Developmental and Experimental Psychology from George Washington University. Previously she was employed by the National Institute of Mental Health (NIMH), the National Institute of Education (NIE), the National Institute of Child Health and Human Development (NICHD) and the CNA Corporation. From 1989 through March 2006 Dr. Friedman served as the NICHD scientific manager and one of the architects and primary investigators of a multi-site, collaborative longitudinal research project on the development of social, emotional, cognitive, linguistic and health development of children from birth through adolescence (The NICHD Study of Early Child Care and Youth Development). She is currently a Research Professor of Psychology at The George Washington University.
Related Articles:
Latest Posts in this Category:
Search