At the start of this school day, the classroom environment is brimming with student teams chatting about last night's online exchanges and organizing to continue their work on the class earth science unit. Malia and two of her classmates, Sahar and Osvaldo, are seated in comfortable task chairs at a multimedia production and communications station. Facing them is a high-resolution, luminescent display screen, viewable from front and back, where combinations of images, text, and digital video can be summoned by voice command.

Osvaldo, born blind, uses the assistive technology of a digital "visual prosthesis system" to see. The system consists of a minicamera mounted on eyeglasses with signal processors and electrodes stimulating his visual cortex, a technology first pioneered on Patient Alpha in 2002. Unlike blind students of previous generations, Osvaldo is able to participate fully in all activities with sighted students.

"Give us our team project on volcanoes," Osvaldo asks the school's server, enabling the team to review its progress during the previous week. Their research using the Global Learning Network has led them to the Hawaii Volcanoes National Park website, where they have witnessed several hours of video footage of volcanic eruptions, observed volcanologists at work tracking and measuring lava flows, and watched interviews with them. The site included a 3-D time-lapse hologram of the 1983 Mount Kilauea eruption on the Big Island. Through the time compression of time-lapse photography, they were able to witness lava flows over the past 40 years. They had made a copy of the hologram and left it in the classroom for use by other students. 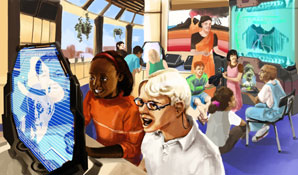 
Yesterday, donning special virtual reality headgear, they had gone on a simulated trip to the lava fields, giving them an on-the-ground sensation of hiking across acres of older lava formations to arrive at a scene of bright orange lava flowing towards the sea. "How cool was that," Malia grins. "You could hear the lava crackling." Last night, from their homes, they had brainstormed some questions in preparation for an interview with a volcano expert, scheduled for today. "Last night's interview questions," requests Sahar. The system promptly displays the students' work on the screen.

Their teacher, Kavery Dutta, stops by to observe their discussion as they prepare for their videoconference. "You know," she advises them, "it would be great to also look at what volcanoes meant to the native Hawaiians centuries ago. They believed in a goddess of fire, Pele." She gives them some resources to search and access from the University of Hawaii Digital Library. She also suggests they look up the pioneering work of MIT geologist Thomas Jaggar, who founded the Hawaiian Volcano Observatory in 1912 and persuaded Congress to preserve the area as a national park.

Ms. Dutta strolls over to check in with another group of students. One of them is holding a sample of volcanic rock, while another examines it under a handheld digital microscope, with the magnified image projectable on a large screen behind them. A third student is examining the volcano hologram left by Malia's group.

"OK, we're ready for our appointment with the volcanologist at Hawaii Volcanoes National Park," Malia announces. The face of Harold Levitt, the Park's chief of interpretation, appears in the familiar green uniform of a National Park Service Ranger. Responding to their questions, Ranger Levitt leads them through several more screens of images showing video news clips and data sources dating back to the Mount Kilauea eruption; the science and chemistry of volcanoes (including dangers such as the release of sulfuric fumes); and the human impact on local communities, from devastation of homes to increased tourism. Malia and her classmates are also able to observe today's lava flows in real time from cameras trained on the site, enjoying the chance to watch the creation of black sand when hot lava meets the cold ocean water.

Malia asks, "A few weeks ago, we had a small earthquake here. We felt it but it didn't damage anything. How are earthquakes related to volcanoes?" On another screen, Ranger Levitt calls up a simulation of plate tectonics and shows them cross-sections of the Earth, as well as aerial satellite photos from different elevations, with overlaid graphics indicating earthquake fault zones in the Bay Area and then San Francisco. For other experts, he refers them to the U. S. Geological Survey offices in the Bay Area. Malia and her classmates make a voicenote in their ongoing project record to ask their teacher about making a field trip and to look up the USGS website.

After their 20-minute interview with Ranger Levitt, recorded on the school's server to become a part of the project archive, the students quickly review the video transcript and earmark some of his comments for possible use in their final multimedia report. At the end of the two-hour session, they make a multimedia summary of their work, calendar next meetings, and assign themselves homework before their next meeting. They each place a copy of today's workfile in their digital backpack, a rugged mobile personal computer and communications console "checked out" by each student at the beginning of the school year, the way textbooks used to be issued.

Malia's "digipack" allows her to spend some more time on her volcanoes project later in the afternoon after walking a few blocks to her father's office. As she waits for him to finish his work, she uses it to connect to the school's library information system and the now-widely-available wireless network. Searching links and browsing through references on Hawaiian mythology, she watches a short video clip on the Goddess Pele on her viewscreen, recording some voicenotes to share with her project partners at school tomorrow.

Later that night at home, Malia is practicing her Chinese in the family room. She hopes to visit China one day and has been using an online language learning system to gain proficiency in basic Chinese conversation, reading, and writing. Her younger sister, Sonia, likes to look on and sits by her side as they face a multimedia screen similar to those in their schools. They both hold handheld digital devices serving as Chinese-English dictionaries for looking up words and phrases in both languages, in text and audio. They can also store their own spoken phrases.

Malia requests, "The lesson on soccer, please," which begins with a scene of Chinese soccer star, Chen Mingde, dribbling around a Brazilian defender and scoring with a precise kick into the corner of the net. The play-by-play commentary is heard in Mandarin, with both the romanized phonetic system and Chinese characters shown as captions at the bottom of the screen. The individual words and characters light up as they are spoken. 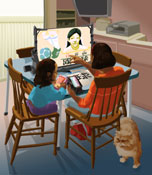 Through this online system, she is also able to converse with students with similar interests in other countries and engage in mutual language tutoring. "I'd like to talk to Xiaoyan," Malia says, asking the system to call her online friend, Xiaoyan Zhao, an 11-year-old girl who lives in Shanghai and goes by the nickname of "XYZ." XYZ appears on screen at lunchtime in her school cafeteria, speaking in English while Malia practices her Chinese as they help each other with vocabulary and pronunciation. They promise to make short videos introducing their family members to each other and send them in the next week.

Malia mentions she's working on a volcanoes project at school, and XYZ recalls that her geography class had studied Mount Fuji, named after Japan's ancestral Fire Goddess. Malia captures XYZ's comment as a voicenote and mails it to her classmates as a suggestion for extending their research. As Malia finishes her conversation and logs off, her father enters the room and asks her the age -old question parents have asked their children for generations: "So what did you do at school today?" As Malia enthusiastically recounts her day, and her excitement about returning to school tomorrow, he shakes his head in amazement. "And to think," he recalls, "20 years ago, all we had was the Internet."

Stephen D. Arnold is a co-founder and managing general partner of Polaris Venture Partners. Prior to starting Polaris, he served as a special advisor to Burr, Egan, Deleage & Co, following more than 10 years in executive positions in the software industry. He served as vice president of Broadband Media Applications at Microsoft Corporation and as president and CEO of Continuum Productions (now Corbis), a private company founded by Bill Gates to pioneer the creation of large digital libraries for online distribution. Before coming to Continuum, he served as vice president and general manager of LucasArts Games and Learning divisions, and vice president of the New Media Group at Lucasfilm Ltd. He continues to serve as vice chairman of the board of directors of the George Lucas Educational Foundation.
Latest Posts in this Category:
Search