New Zealand has many types of early childhood education (ECE) services. Teacher-led services include kindergartens, education and care centres, and home-based education and care services. Parent-led services include playcentres, Kōhanga Reo, and playgroups (See Table 1). Although there are many types of ECE services, all ECE services are delivered through the implementation of a common early education curriculum called Te Whāriki*1. International studies on early childhood education in New Zealand focus on this curriculum. As its most important feature, this curriculum is not purpose-oriented but based on ideals consisting of four principles and five strands. "Te Whāriki," which means "mat" in Māori, one of New Zealand's official languages, considers the curriculum to be "a mat for every child" and is widely-used in many ECE services with varied educational philosophies and cultural backgrounds. Nowadays, Te Whāriki is becoming famous in Japan although its origin is not that well known. In this article, the origin of Te Whāriki, the features of Te Whāriki, and recent issues will be introduced.

The Origin of Te Whāriki

Until 1990, the quality of education at kindergartens was adequate in terms of teacher's qualifications and fees. At that time, other services were not qualified and subsidized *2. Generally, the kindergartens were established for children turning 3 years of age. However, most kindergartens used to hold a morning session for 4-year-old children and an afternoon session for 3-year-olds *3. They also ran sessions aligned with school terms which meant they had long holidays *4. This kindergarten system was not suitable for working parents. With the rise of the women's rights movement, the right to choose services, equal subsidies, and the quality of ECE became important issues. Moreover, there was a focus on increasing the attendance rate of Māori *5 and Pacific Islanders. Increasing numbers of migrant children in schools were also a concern. Coincidentally, every service delivered under the Department of Social Welfare was transferred to the Ministry of Education in 1986. Thus, there was a practical need to make a curriculum that could cover many services and philosophies together. It was during this period, sometime in 1990, that Te Whāriki had its beginnings. A national curriculum was needed but service providers were also concerned that the national curriculum would obliterate their independence and diversity. Margaret Carr, the project leader, together with other authors, tried to listen to all service providers. This became possible because of the Kōhanga Reo Trust *6 and Tamati Reedy's *8 corporations which accomplished the Māori immersion education *7 program. It took more than 6 years to complete Te Whāriki. The process of developing Te Whāriki was more bottom-up than top-down. In writing this section, May (2005) was mainly referenced but there are many academic articles regarding the development of Te Whāriki. This topic is also included in the document on Te Whāriki (Ministry of Education, 1996, p.17-18).

Some features of Te Whāriki

Te Whāriki has many unique features. In particular, three features of Te Whāriki are important to explain in order for Japanese people to understand this curriculum. Firstly, the term "curriculum" used in Te Whāriki has a more holistic and broader meaning than how it is generally used in Japan. This holistic meaning can be seen in the introduction of Te Whāriki which explains, "this curriculum is founded on the following aspirations for children: to grow up as competent and confident learners and communicators, healthy in mind, body, and spirit, secure in their sense of belonging and in the knowledge that they make a valued contribution to society." Secondly, the central idea comes from the concept "empowerment *9" which was the most important topic among Māori people in 1996. Along with this, authors recognized that the empowerment of children is the most important issue not only for Māori but also for all children across New Zealand. Consequently, the four principles and the five strands were decided. The four principles are Empowerment, Holistic Development, Family and Community and Relationships while the five strands are Well-being, Belonging, Contribution, Communication and Exploration. The details are listed in the tables below. Te Whāriki establishes these principles and strands as a framework in which children can learn and develop within a sociocultural context. Thirdly, the curriculum respects diverse practices. It does not contain specific objectives for each age or stipulate educational content. It also respects educational philosophies such as Montessori education, Rudolph Steiner education, and Playcentre. In fact, these service providers provide education according to their own educational philosophy and use Te Whāriki as a curriculum at the same time. Children with special needs are also covered by Te Whāriki. Furthermore, Te Whāriki is a bicultural curriculum. The curriculum includes translated Māori language and Māori immersion curriculum which is mostly used at Kōhanga Reo.

How should a teacher assess children when the education is based on Te Whāriki? After 1996, a lot of research regarding assessment was encouraged and funded. The assessment method referred to as learning stories was finally introduced (Carr, 2001). More than 94% of ECE centres adopted learning stories in 2007 (Mitchell, 2008). This approach is not the traditional purpose-based assessment. It describes the children as they are. More of a narrative method, it is time consuming for teachers, but considered to be a very important tool for teachers and parents as part of a child's development. Recently, records are not only written but also recorded by digital camera as well. It is very common for the teacher to take photos in daily sessions. Learning stories are frequently used in teacher-led services. This method is not used as often in Kōhanga Reo Māori education. 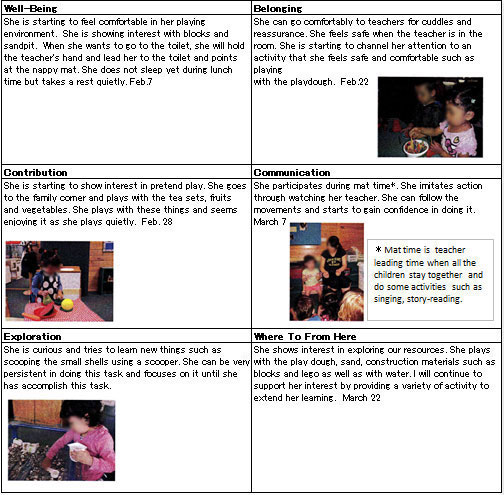 People who know Te Whāriki are generally proud of it because of its democratic origin representing New Zealand's ideals. Internationally, Te Whāriki is highly evaluated as a leading curriculum by such organizations as the OECD. Also, teachers are positive about the curriculum because it respects teachers/services' development of their own educational practice. It has been already 17 years; most of the teachers working at ECE services now learned Te Whāriki at school. During this time, many migrants became ECE teachers to solve the teacher shortage issue and the proportion of migrant teachers is very high. Te Whāriki has attracted teachers who are migrants or the teachers whose colleagues are migrants.

On the other hand, there is also some criticism. For example, teacher's interpretations of Te Whāriki are too varied; the way of writing learning stories differs with each teacher; Te Whāriki becomes an excuse for some teachers since Te Whāriki does not require any specific result. Because the curriculum does not specify outcomes and practices, services and teacher's ability can be assumed to vary widely. Moreover, some recent research shows that despite the large amount of funding used in the ECE sector, there is no understanding of what New Zealand children are learning (Blaiklock, 2013). This criticism points out that there is not enough accountability in ECE. The recent rise in funding for ECE, which has doubled from 5 years ago, brought on this criticism. These criticisms may be difficult to deal with because, in the first place, Te Whāriki originally aimed to include diverse cultural backgrounds, educational philosophies, and many education services that already existed, but not to assess the result of each type of education service.

In June 2011, an independent ECE taskforce group *10 proposed many ideas regarding a vast range of topics including such matters as the quality of education and cost effectiveness to the Ministry of Education. This ECE taskforce was established by the Education Minister to review the ECE independently. In 2012, the Ministry of Education also unveiled Pathway to the Future *11 - a 10-year strategic plan for early childhood education. The content of this plan includes the subsidy system, effective implementation of curriculum, and assurance of the quality of ECE teachers. Researchers think these recent proposals will make New Zealand ECE more effective. Te Whāriki, being considered a leading curriculum in the world, faces recent issues such as market needs and a lack of accountability in New Zealand. The future direction of New Zealand early childhood education is now given more attention.

Currently living in Auckland, New Zealand. Previously worked as a test development consultant. Graduated from Ochanomizu University and obtained a Master's degree in Education from the University of Tokyo.
Related Articles:
Latest Posts in this Category:
Search