Communication Conditions Required to Teach and Be Taught

I have been researching infant-related topics since 1998 with a strong interest in the development of infants' minds and brains. I would like to introduce you to the android robots invented by a friend. These robots closely resemble humans but it feels rather awkward when one talks and communicates with them. I don't feel this awkwardness when communicating with humans. What could be the reason? This is another of my research topics.

Let me start by introducing to you an experiment where they talked to American infants in Mandarin. The parents of the infants were Americans and the infants had no knowledge of Mandarin. In Mandarin, there are certain phonemes which do not exist in English. The researcher who did this experiment questioned whether an infant who does not understand Mandarin would be able to distinguish Mandarin phonetic contrasts after repeatedly listening to it. As a result of the experiment, it was proved that the infants were able to distinguish Mandarin phonetic contrasts when taught face to face.

In the next experiment, an infant who does not understand Mandarin is taught Mandarin again. However, this time, the woman teaching the same content was filmed beforehand and the video was shown to the infant. The test was carried out in the same way, after showing the video to the infant for the same length of time as the experiment done face-to-face. The infants who were exposed to Mandarin through video were not able to distinguish Mandarin phonetic contrasts, the same as the other infants who had not been exposed to Mandarin. This is a very interesting result. It suggests that a one-way communication for both teaching and learning does not work. After all, it is effective to communicate face-to-face when teaching and learning.

In our lab, we performed the following experiment to look at "Differences in imitation performance of different media" (Figure 1). We made three settings; live demonstration, recorded but mimicking a real situation, and TV (recorded), and had a young lady demonstrate how to play with the toys. Then, we had the children imitate what they saw and examined how they imitated, i.e. how well they had learnt how to play with the toys. As a result, the imitation score was the highest when taught face to face and the percentage of imitation was higher when shown a recorded demonstration mimicking a real situation than simply being shown a recorded video on TV. This tells us that it is important for the learner to feel that "This is being taught to me here at this very moment" when learning something. 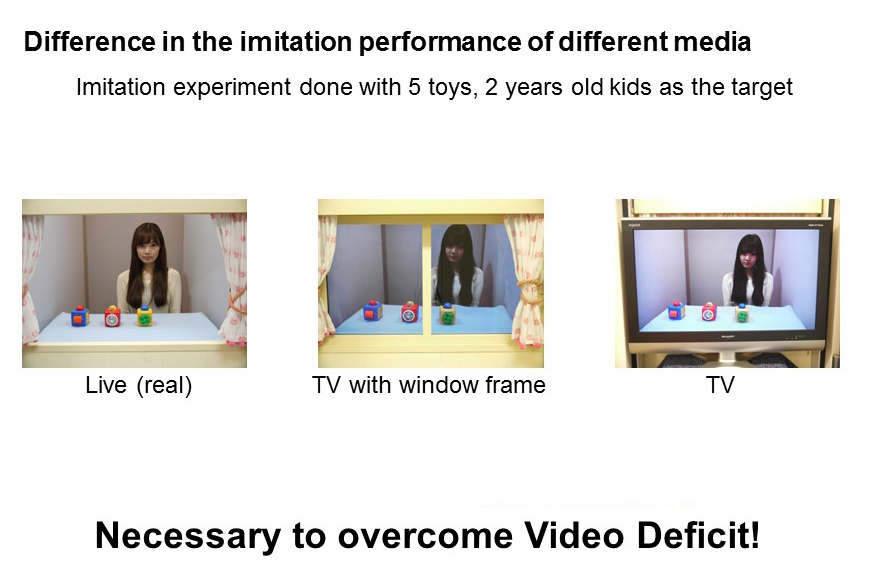 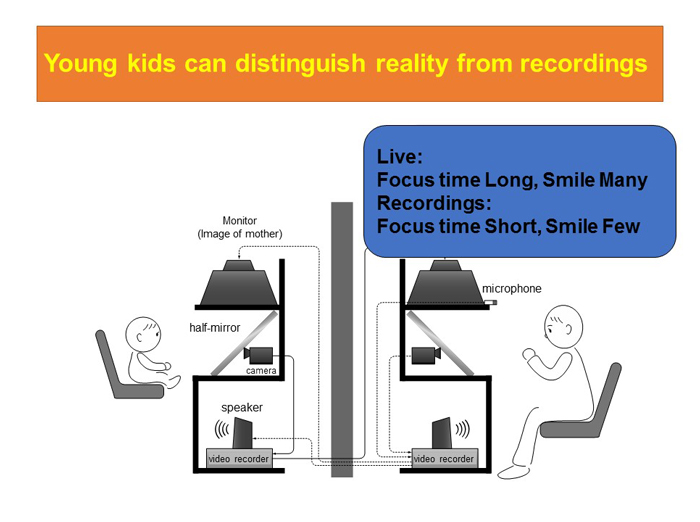 While numerous similar research projects were conducted, around 10 years ago, we did an experiment to ascertain how babies' brain activity differs between watching an adult's action live and televised through NIRS (near-infrared spectroscopy) measurement (Figure 3). To be specific, the brain activity is measured by fitting a measuring device to the babies' heads. This device is quite safe and does not cause pain or discomfort. The results indicated that although the infants' brains were active when they were looking at the televised action, the brain behaved differently from when they were watching real people. 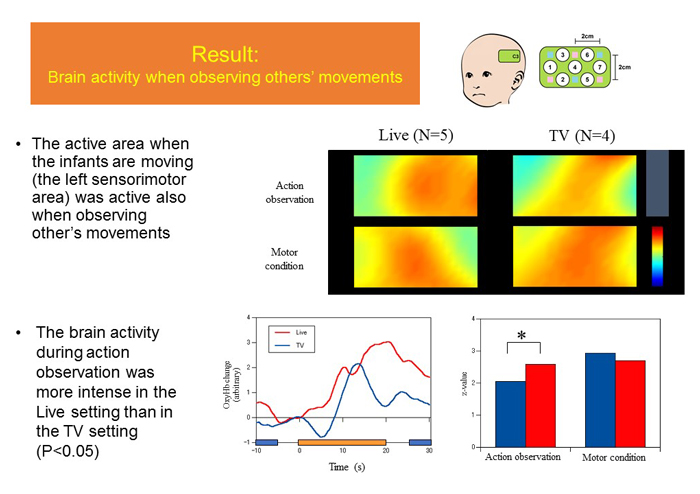 Today, I would like to introduce you to our ongoing research about Pedagogical machines. Whether machines can teach humans and the other way around, whether humans can learn from machines, are our research topics. We have three research goals and are working on our research with three methodologies.

Now, I would like to talk about the "Methodology of developmental cognitive science." We carried out an experiment to ascertain what it is to communicate in a live situation, in other words, "in real time" (Figure 4). We placed a mother and a child in separate rooms and had them communicate through a TV monitor. In one of the conditions the interaction was done in real time and the other had a delay of one second in the communications. I believe you might have seen a situation where there is a lag between the communications of reporters in satellite broadcasting in the Olympics and such. In the experiment, we asked the mother to teach how to play with the toys to the child around 2 and half years old and had the child imitate it. Comparing the communication in real time and with a one-second delay, although there was not much difference in the actions of the mother, the imitation score of the child was higher for real time communication. These results indicate that even little children are sensitive to whether it is in real time, right there, or whether they have seen something and their actions are based on that. 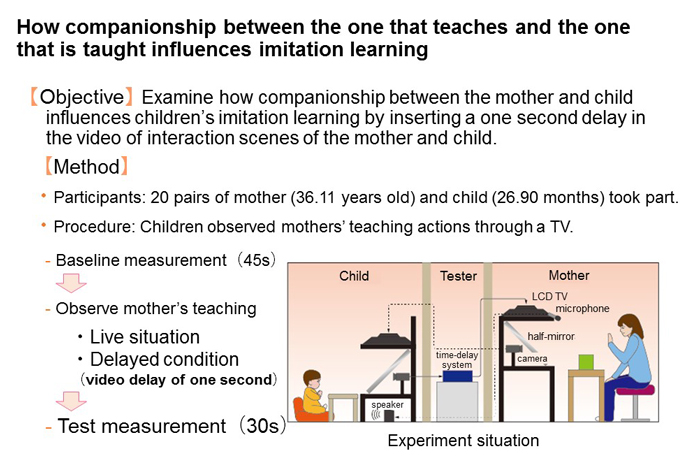 Next, I would like to talk about the "Methodology of information engineering". We are doing research on "teaching artifacts" using small robots. One of them is a robot that reads to children in French (Figure 5). French is an unfamiliar language for children living in Japan. In this example, the robot first reads "The Three Little Pigs" in French. The movement of the robot corresponds to the "picture" shown in the monitor. Results showed that even children who were hearing French for the first time remembered the major French words in the story precisely. As an extension of this experiment, we are working on a research project using electroencephalographs. At this point, it has become clear that little children are soon able to memorize unfamiliar French words, in experiments using electroencephalographs. 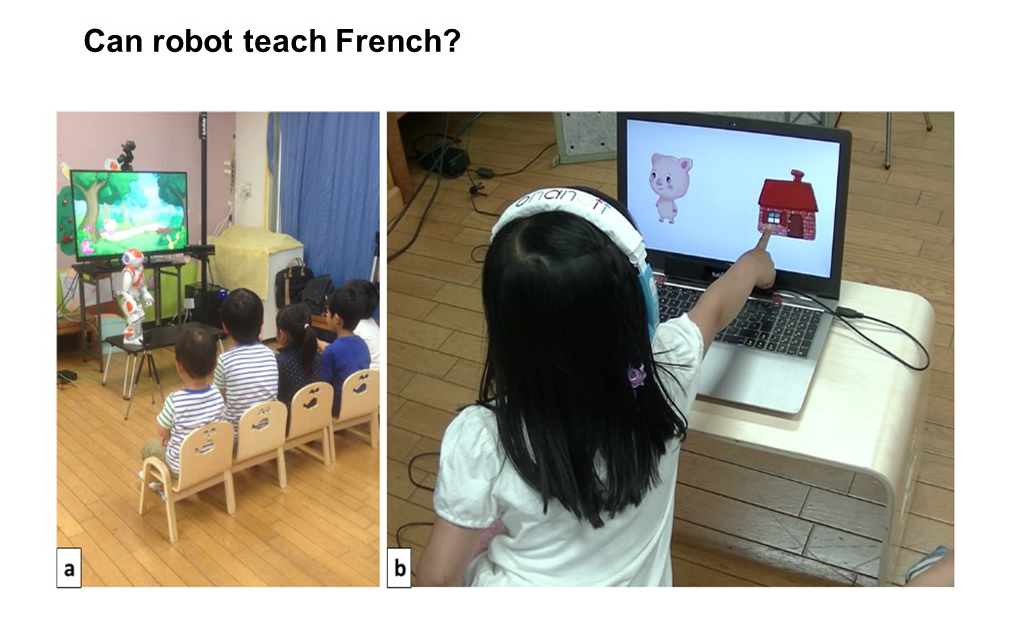 Nowadays, with smartphones becoming common, there are negative opinions regarding mothers raising their children using smart phones. As a researcher, I would like to investigate how we should handle high tech devices from a neutral perspective. However, as a matter of fact, I often see mothers on trains in Japan intently focused on their smartphones to the extent that they do not respond to their babies when they're asking for attention. This does not establish a communication under a "live" situation "directed at me" as I have mentioned earlier. Therefore, I personally think that the issue is not about permitting children to use smartphones or not but more about using them as little as possible when mothers are with their child.

Finally, I think it is important to remember that various issues that call for further research still remain. Other than research in laboratories, which is very important, observation and research in real sites such as nurseries and schools are necessary. There are still a great many things to be discovered but I would like to progress steadily with my research one step at a time. Thank you very much.

Ph.D., Professor at Department of General Systems Studies in Graduate School of Arts and Sciences, and the Interfaculty Initiative in Information Studies, The University of Tokyo. Born in Toyama prefecture, 1963. Worked as a senior researcher of the Electrotechnical Laboratory of the Ministry of International Trade and Industry of Japan before assuming the current post in 2000. Mainly engaged in the studies on "Baby Science," exploring the process of infants' and young children's development of mind, behavior and brain through scientific approaches. Professor Hiraki teaches human informatics and developmental science, etc. Serves as Executive Director of the Japanese Society of Baby Science, Executive Director of Japanese Society of Child Science, and Member of the Science Council of Japan. His major publications include: "Bosei to shakaisei no kigen [The origin of maternity and sociality] (Iwanami Lecture: The Cognitive Science of Human Communication 3)" (Iwanami Shoten), "Akachan no fushigi [Wonders of babies] " (Iwanami Shoten), "Nichiyou piaje akachangaku no susume [Introduction to baby science on a Piagetian Sunday]" (Iwanami Shoten), and "Sosharu bureinzu--Jiko to tasha wo ninchi suru nou [Social brains: Cognition of self and other]" (University of Tokyo Press).
Related Articles:
Latest Posts in this Category:
Search