What Changes Did Japan's Declining Birthrate Bring about to the Families of Young Children? (1) - Projects
中文
日本語

TOP > Projects > Declining Birth Rate and Child-rearing in Japan > What Changes Did Japan's Declining Birthrate Bring about to the Families of Young Children? (1)

What Changes Did Japan's Declining Birthrate Bring about to the Families of Young Children? (1)

What Changes Did Japan's Declining Birthrate Bring about to the Families of Young Children?


In November 2015, the Benesse Educational Research and Development Institute (BERD) published the results of the Questionnaire on Daily Life of Children in Japan V. In this session, we asked Professor Takashi Muto at Shiraume Gakuen University, who supervised the survey, to provide his comments on the survey results such as changes in the families of young children, which have been brought about by Japan's declining birthrate and other societal transformations.

The BERD has conducted the Questionnaire on Daily Life of Children in Japan every five years since 1995. The fifth such survey was conducted in 2015. The respondents were 3,466 parents with preschool children aged between 18 months and six years old living in metropolitan areas (Tokyo, Kanagawa, Chiba and Saitama Prefectures). I will now give an overview of the changes in the families of young children over the past twenty years since the survey was first conducted.

1. Changes in young children's relationships with others

First of all, the most fundamental change is the declining birthrate. This has significantly impacted the everyday lives of young children. The lives of young children now mainly consist of two parts: "home" and "childcare settings (kindergartens, daycare centers, ECEC centers [Early Childhood Education and Care center: nintei kodomo en], etc.)." For example, the percentage of children who play with their friends on weekdays in places other than childcare facilities has declined, from 56.1% to 27.3% over the past twenty years. In contrast, the percentage of children who play with their mothers has increased, from 55.1% to 86.0% (see Figure 1).

Figure 1: Persons with whom children play on weekdays (in places other than childcare facilities) (changes over the past 20 years)

Source: "Questionnaire on Daily Life of Children in Japan V" by the Benesse Educational Research and Development Institute, 2015

It is assumed that the number of neighborhood children to play with is decreasing, while the amount of time children spend at kindergarten/daycare center has increased over the past twenty years. Thus, the role of kindergartens/daycare centers, offering a place for social interaction among children, is becoming more significant.

The next noticeable change is the increase in the number of dual-income families. The percentage of working mothers (full-time, part-time and freelance) increased from 26.3% in 2005 to 40.9% in 2015 (see Figure 2).

Figure 2: Trend of maternal employment (changes over the past 10 years)

Source: "Questionnaire on Daily Life of Children in Japan V" by the Benesse Educational Research and Development Institute, 2015

Although the number of children is decreasing, the number of dual-income families is increasing, which in turn increases the demand for daycare centers. As a result, the issue of children on waiting lists for childcare settings has become critical. However, I believe that this situation will improve over the next five years or so, apart from in certain parts of the 23 wards of Tokyo.

The results of the fifth survey show that the percentage of children attending kindergarten is approximately 40%, while that of children attending daycare centers is approximately 30%. The survey targeted those metropolitan areas where the number of full-time housewives is relatively high. Nevertheless, the number of children attending daycare centers has been increasing, something I assume will continue in the future. This trend is probably due to changes in attitudes towards women's employment and lifestyle, as well as increasing pressure on the need for two earners resulting from the current economic downturn.

Figure 3: Parents' expectations regarding kindergartens/daycare centers (by facilities/changes over the past 10 years)

* Figures are the percentage of the sum of "Very true" and "Somewhat true."
* Only the answers of the respondents who have children attending childcare facilities are included.
* Only the answers of mothers are included.
* Item marked with " * " only asked in the 2015 survey.
Source: "Questionnaire on Daily Life of Children in Japan V" by the Benesse Educational Research and Development Institute, 2015

Likewise, more mothers chose "Very true" or "Somewhat true" to the item "Enrichment activities after childcare." This is probably due to the increase in the number of kindergartens and daycare centers that now offer extended childcare services. The number of mothers who chose "Very true" or "Somewhat true" to the item "Teach children the rules of communal life" or "Help children make friends and socialize" showed a slight decrease but still represented a large percentage of the total respondents, indicating the fact that the majority of mothers wish their children to develop social skills at kindergarten/daycare center. The expectations of parents regarding kindergartens and daycare centers have not shown a major change over the past twenty years, yet it seems that their objectives have diversified. 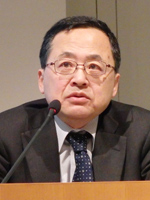 Professor, Director of the Childhood Studies, Shiraume Gakuen University.
Served as a commissioner of the Central Education Council organized by the Ministry of Education, Culture, Sport, Science and Technology (MEXT), Japan. Specializes in developmental psychology and educational psychology. Supervised the "Questionnaire on Daily Life of Children in Japan" by the Benesse Educational Research and Development Institute.