Changing Realities of Families with Children (3)

Changing Realities of Families with Children

Babylag: the polarized situations of mothers, fathers and grandparents

I would like to discuss the current conditions of childrearing by using the keyword, "babylag." The content of my discussion is based on my experiences that I have acquired by counselling mothers on issues regarding childcare as well as on problems that arise during daily lives.

When I listen to the voices of mothers suffering from babylag, I often think of their polarized situations. First of all, mothers are overly serious about childrearing. A recent news reported that a mother, who was worried about not producing enough milk for her baby, bought breast milk online, and subsequently found that the quality of the breast milk was problematic. For her, the option of using formula milk instead of breast milk was not acceptable. Similarly, there was another mother who was upset that she spanked her child and became mentally depressed. She was told to take her child to a temporary daycare so she could rest and recover. But she rejected this suggestion, insisting "How can I do so, when I am a mother." In contrast, there are certain mothers who do not care about their children, and neglect them, thinking that childrearing is troublesome.

In the case of fathers, there are fathers who consider themselves to be Ikumen but have no confidence. They feel stressed because many of them believe they are not properly appreciated for their efforts in housekeeping and childrearing. In contrast, there are fathers with pre-war chauvinistic attitudes. They would say to their wives, "I'm making a living for my family. If you have any complaints, you can work and earn money." There is no such a thing as a fifty-fifty relationship. Mothers only wish that their husbands would feel compassionate and say things like "I too had a rough day, but so did you, right?"

When we turn to grandparents, there are grandmothers who are excessively dedicated to grandchildren's care. There was a grandmother who went to her daughter's house at 5am every morning to cook breakfast, drive her daughter to the nearest station and the grandchild to the daycare center, and prepare dinner for them. The grandmother had been dedicated to her daughter's education, and is very proud of her daughter's career. She hoped her daughter would continue with her career, and hence, offered an excessive amount of help. As a result, the daughter's husband did not have to participate in childrearing and housekeeping at all. They did not notice that they had missed an opportunity to strengthen a bond as a family through childrearing together. On the other hand, there are grandparents who cannot or do not help childrearing, due to various reasons such as health problems, jobs, or a long distance between their living places. There are also some grandparents who are determined not to help with childrearing. They do not help their daughters even though they are able to do so. They are not eager to meet their grandchildren. As a result, these mothers feel stressed due to lack of parental help compared to those who receive a lot of support from their parents.

There are deep-rooted reasons for such "polarized situations." One of the reasons is, I believe, the education given to the current generation of mothers, which focuses on accomplishments in getting a correct answer as promptly as possible. Mothers who received such education are likely to be afraid of making mistakes. They become extremely tense in search for successful childrearing that involve no mistakes.

Another reason is the lack of historical knowledge on the past childrearing traditions in Japan. The currently accepted gender roles in a family (i.e. only mothers are responsible for childrearing) have only come about in the last few decades, and started as a national policy during the period of rapid economic growth in Japan. Prior to the 1960s, childrearing involved a great many members of family and society. Unfortunately, most people nowadays are unaware of this fact. The social value of childrearing practices only within a nuclear family is still persistent. Mothers having such value are unwilling to ask for help, and will even avoid making use of childrearing support centers.

With the hope of helping mothers in such a stalemate, I am engaged in activities at the non-profit organization Ai-Port Station in Minato Ward, Tokyo. The NPO is a childrearing support center jointly operated by the local government. Ai-Port Station offers a free social space for parents and children, as well as providing a temporary daycare service for any children regardless of the reasons for the need for care, and is open 365 days a year. Numerous parents with various occupations use this service since they cannot find any other alternatively licensed daycare for their children. We also provide this service for mothers who want to have time to study or refresh themselves, as long as the capacity allows it. 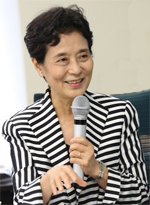 Masami Ohinata
Dean and Professor at Keisen University, and Representative Director of NPO Ai-Port Station.
Prof. Ohinata specializes in developmental psychology and gender studies. She has been vocal about the necessity of childrearing support at a society level for dual-income households, which in turn would help provide the young parents an environment to enjoy their childrearing.
She supervised the “Survey of Fathers’ Views on Childrearing in Japan” conducted by the Benesse Educational Research and Development Institute.