Changing Realities of Families with Children (2)

Changing Realities of Families with Children

Why fathers' participation in childrearing is becoming a popular topic

The Child Care and Family Care Leave Act was enacted in 1991. Since then, however, the ratio of male workers who took childcare leave has been unchanged, at around 2% (in 2014). When the revised Child Care and Family Care Leave Act was implemented in 2010, the Ministry of Health, Labour and Welfare introduced the "Ikumen Project" in order to encourage fathers to participate in childrearing. For me, the word Ikumen means "a father who is prepared to take responsibility for his family, by voluntarily participating in and enjoying childrearing and creating a family with his spouse and children."

In April 2010, Mr. Hironobu Narisawa, the mayor of Tokyo's Bunkyo Ward, took a two-week paternity leave. During the leave, Mr. Narisawa went out with a stroller and subsequently became aware that the roads in Bunkyo Ward were not at all suitable for the use of strollers. After he returned to work, he immediately initiated road improvement arrangements. He said that his participation in childrearing made him recognize that there are various "discomforts" for parents in childrearing, which he had never been aware of before. Following the example set by Mr. Narisawa, numerous male municipal leaders took childcare leave. This is a good example that Mr. Narisawa's decision to take this course of action served as a role model and encouraged other fathers to do so.

I am currently serving as an advisor to the nonprofit organization "Fathering Japan," which now has more than 400 father members. As I used to work as a daycare teacher, when I met the director Tetsuya Ando, we "clicked" right away agreeing that "Childrearing is so much fun, so we should do it smiling" and started the operation of the NPO. Today's young fathers do not have a role model of fathers involved in childrearing. We hoped that Fathering Japan could offer a role model of fathers who enjoy childrearing, when we started the activities of the NPO. Nowadays, the age range of fathers of children is becoming broader; therefore, it becomes difficult to determine the target scope of fathers for support. We aim to offer a place to communicate with other fathers in each local community.

Now then, what kind of support can we offer for fathers? I believe that we can offer support focusing on the following points.

1) Empowerment: To empower fathers by helping them gain appropriate knowledge, understanding and value on childrearing. Fathers are more likely to join in with our events, if we provide clear objectives and schedules for each event. Therefore, Fathering Japan hosts each event by indicating its theme "Fathers & (the title of activity; e.g., playing, making, eating, etc.)," which may attract more fathers.

2) Partnership: To help fathers understand the nature of the partnership with their spouse, and do childrearing together.

3) Work-life balance: To help fathers realize the concept of work-life balance and enjoy their work, family life, and community involvement. To promote the participation of fathers in housekeeping and childrearing, improvements in their working conditions are necessary.

4) Networking: To assist fathers to establish human relationships and networking in their local community, so as to actively participate in childrearing and family life.

In addition to the above points, there are many ways to provide support for fathers, such as hosting fathering events at nights on weekdays or weekends, or setting the environment of the childrearing support center comfortable for fathers (such as the color of the interior). There are certain fathers who cannot do anything without the help of their spouse. Fathers who are not mature enough as a citizen are also a problem.

This initiative to support fathers is new and lacks standards and norms yet. However, in other words, we have enormous potential. Young fathers are rookie parents, and hence, changes are likely to occur. It is important to understand their feeling and thoughts, and effectively support them. It is also necessary to link the changes of fathers to that of mothers, children, families, companies, communities and to that of society. 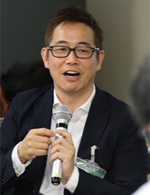 Associate Professor at Osaka Kyoiku University, and Advisor at the NPO Fathering Japan. Prof. Kozaki specializes in social welfare, and has worked as a daycare teacher. He was the first male daycare teacher for the Nishinomiya city government. He is currently conducting social activities including giving lectures on the themes of the development of children, the role of fathers, and childrearing methodologies from the standpoint of fathers. He has three sons.