Issues Involved with a Low Birth-rate Society: Focusing on the Increasing Unmarried Population--Young People's Views on Relationships with the Opposite Sex, Marriage, and Children (2) - Projects
中文
日本語

TOP > Projects > Declining Birth Rate and Child-rearing in Japan > Issues Involved with a Low Birth-rate Society: Focusing on the Increasing Unmarried Population--Young People's Views on Relationships with the Opposite Sex, Marriage, and Children (2)

Issues Involved with a Low Birth-rate Society: Focusing on the Increasing Unmarried Population--Young People's Views on Relationships with the Opposite Sex, Marriage, and Children (2)

Issues Involved with a Low Birth-rate Society: Focusing on the Increasing Unmarried Population--Young People's Views on Relationships with the Opposite Sex, Marriage, and Children

I have written some books about women and work such as "Marriage hunting" and "Efforts to conceive," since my persistent interest is in the wellbeing of women. It is necessary for us to think about how to encourage women to feel they want to have children, as part of the measures to cope with Japan's declining birth rate. According to the OECD survey results, there is a positive correlation between the female labor force participation rate and the birth rate (Figure 6). Certain survey data indicating the migration trend of women from prefectural areas as well as some studies by sociologists prove that both stable employment conditions and a working environment that allows women to manage both childrearing and work are indispensable, for women to feel that they want to have children.

However, female university students who wish to continue working after childbirth are often discouraged after they actually start working. This is because it is difficult to maintain the ideal image of working mothers due to various factors: their own mother who is a typical housewife, female colleagues who are strongly motivated in pursuing their career, the possibility of remaining behind in a male-dominated work field after childbirth, and so on. In addition, there may be some women who are not convinced as to why they work. I believe that it is necessary to encourage female workers by convincing them of the meaning of continuing to work and as a result, motivating them to get married and have children. 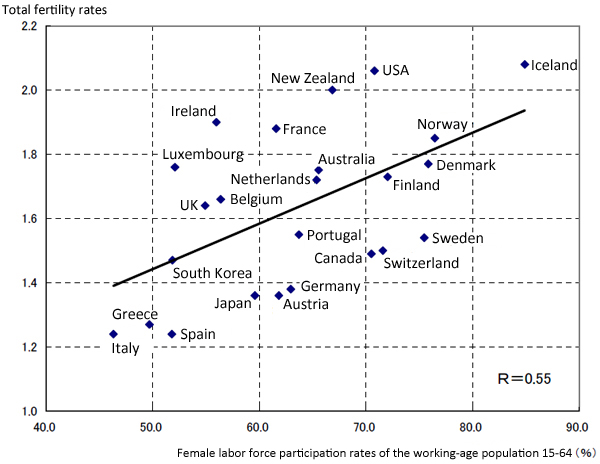 
In order to overcome the hurdle of "childbirth" and "work"

The following factors are likely to hinder efforts to overcome the hurdle of "childbirth" and "work". We should address such factors in order to encourage female workers.

2. Economic dependency on men after marriage:
The percentage of children born out of wedlock is a low level of about 2% in Japan. This indicates that the majority of people think they should consider pregnancy and childbirth only after marriage. Women's economic dependency on men after marriage is one of the major reasons for the difficulty involved in getting married. Only 5.7% of men of marriageble age have an annual income of 6 million yen or more, one of the thresholds to choose an ideal husband (Figure 7). Furthermore, a lot of young people who are looking for a steady partner remain in the standby mode. They should take a positive approach to getting a boyfriend/girlfriend, if they really wish to get married.

3. Difficulty in managing both childrearing and work:
The working environment supportive of female workers who wish to have a child will encourage a lot of female workers to continue working, including those who were not thinking of childbirth at the time of graduation from university. Furthermore, when men's participation hours in childrearing and housekeeping is long, the birth rate of the second child is likely to increase (Figure 8). Therefore, it is important to address the issue of working long hours.

4. Infertility due to age:
In Japan, the ages ideal for pregnancy correspond to the typical ages of career development. I believe that it is desirable for women to have the first child in their 20s and early 30s. I often encourage female workers to actively develop their career to the extent possible before childbirth, and then, after childbirth, seek efficient ways to achieve outcomes. It is not easy to accomplish your life plan as intended. Therefore, I recommend female workers to think about "Career Drift" - a situation in which a worker flexibly handles unexpected events in her career path. 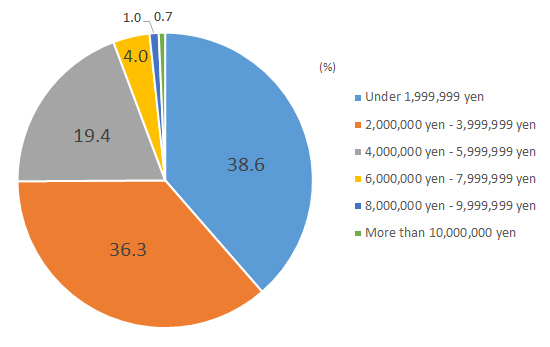 Figure 8. Hours of housekeeping and childrearing by husbands on non-working days and the birth of the second child and thereafter

* 1) Respondents: married couples living together who fall under the categories of (1) or (2), as well as (3), excluding those without "wife's data before childbirth."

3) In case of couples who have had two or more children over the past eight years, the data of the youngest child was adopted.

4) The total number includes couples who answered "uncertain" regarding hours of housekeeping/childrearing.
Source: "The 9th Longitudinal Survey of Adults in the 21st Century" by the Ministry of Health, Labour and Welfare


Couples, companies and the government should jointly address the issue of declining birth rates

It is said that the labor force will decline by 50% by 2060: therefore, companies should urgently address this issue by improving employment conditions as part of their business strategies. There have been three phases in the development of women's employment conditions. Phase one is the enactment of the first Equal Employment Opportunity Act for Men and Women. The Act is intended to provide both men and women with equal employment opportunities and allow female workers to work in the same way as male workers do. Phase two is the introduction of support systems for women to manage both work and childrearing, such as the childcare leave system and the reduced working-hour system. Phase three currently calls for companies to address the issues of long working hours, performance evaluation, and the low usage rate of paid leave, as well as introducing more flexible work options such as "telework." Companies should provide a working environment favorable not only to women but also to men. Such an environment will be required by companies that need to acquire more talented personnel while facing up to the issue of a declining labor force. Therefore, the issue of Japan's declining birth rate should be cooperatively addressed by couples, the private sector and the government.