♦ The issue of declining birth rates ♦

•The most common factors of declining birth rates are an increase in the unmarried population and a decrease in the number of children in families.

•Reexamining the causal factors of declining birth rates and helping those who want to get married, give birth, and raise children to fulfill their wish to do so

On this occasion, Professor Shigeki Matsuda (sociologist) at Chukyo University delivered a lecture on the issue of Japan's declining birth rate, including its features, causal factors and countermeasures.

"Low birth-rate" is recognized when the total fertility rate (TFR) falls far below 2.07 for a long period of time. In Japan, the birth rate started to drop in the mid-1970's, but was recognized by the government as a national issue in the early 1990's after the TFR fell to 1.57 in 1989 ("1.57 shock"), which was lower than the previous record low of 1.58 in 1966, the year of hinoeuma, or the notorious Fire Horse in the Chinese zodiac *1. In other words, the birth rate began to drop in the 1970's, but no measures were taken by the government for 20 years. The government finally started to address this issue in 1990, but has failed to find effective measures to stop declining birth rates up to the present. Therefore, it should be considered that these measures are not "sufficient" or "appropriate." The following data verifies the ineffectiveness of these measures.

The government introduced the "Angel Plan" initiatives (the "Five-Year Projects Including Urgency Day Care Measures") to counter the declining birth rates after the "1.57 shock." The initiatives aimed mainly to provide child-rearing support at day-care centers, etc., and to encourage full-time working mothers to reconcile work and family life. This action was taken based on the findings from research conducted after the "1.57 shock" which revealed the trend of increasing women's participation in the labor market and insufficient support to help them manage both work and child-rearing.

The Ministry of Internal Affairs and Communications compiled an assessment report on the Angel Plan initiatives in 2004. The report indicated that institutional support for working mothers to help them manage both work and child-rearing had increased through the additional establishment of day-care centers and the diffusion of taking childcare leave; however, other issues still remained unimproved and the birth-rate did not recover either *2. In fact, the TFR further dropped over the next 20 years, from 1.57 in 1989 to 1.43 in 2013.

Based on the above facts, the measures are insufficient due to the absence of the following: (1) specific target figures for a birth rate recovery; (2) extended targets of government policies; (3) measures to reduce financial burden in typical families (meaning a traditional family structure consisting of a working husband, a housewife and children) and improve youth employment for those outside the scope of the incentives; and (4) campaigns to encourage people to consider marriage, childbirth and child-rearing. With respect to the factors (1) and (4), it is considered that the government was not comfortable implementing policies with such target figures and campaigns that reflect the wartime slogan "umeyo fuyaseyo (give birth and multiply)." The next chapter will explain the reasons for citing the above four causal factors using actual data.

2. The most common causal factors of declining birth rates are an increase in the unmarried population and a decrease in the number of children in families

It is considered that the failure of the government's initiatives to counter declining birth rates is related to its misunderstanding of the causal factors of declining birth rates. The following seven factors were hypothetically considered to be the typical causes of declining birth rates: (1) the trend of increasing women's participation in the labor market and insufficient support to help them manage both work and child-rearing; (2) marriage market mismatch; (3) deterioration in employment of young people; (4) parasite singles; (5) changes in the value of marriage and childbirth among young people; (6) high financial burden of childcare and education; and (7) physical and mental burden of childcare. 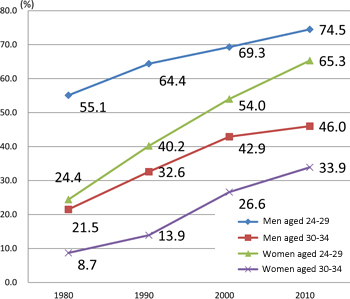 The above factors are surely the causes of declining birth rates, but the factors (2), (3) and (6) are major factors, in particular.


Figure 2: Number of children in families 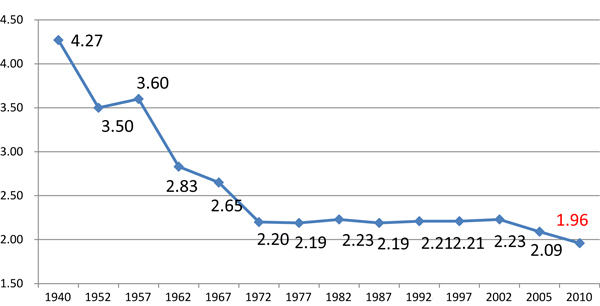 Source: "Basic Survey on Birth Trends (for married couples)" by the National Institute of Population and Social Security Research

Next, I will explain the background of these two factors. The increase in the unmarried population is caused by employment instability among men, that is, an increase in non-regular employment (factor (3)). In addition, some point out that the salaries of regular workers have not increased, but rather decreased for some since the 1990's. The survey data reveals that male workers in their late 20s whose annual salary is less than three million yen tend to stay single their whole life, which indicates that there are many people who do not marry due to economic reasons including employment instability. In addition, although there are young people who still adhere to the traditional family values in which the husband works, and the wife stays at home, they cannot find the right partner. This mismatch is another factor that increases the number of unmarried people (factor (2)). 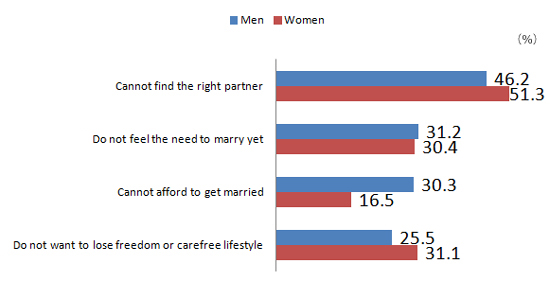 Source: "The 14th Basic Survey on Birth Trends (for singles)" by the National Institute of Population and Social Security Research

"Marriage aspiration" is another factor that determines marriage. Around the time the baby boomers got married, about 50% of total marriages were arranged marriages. However, love-based marriages have increased since then, and currently, the ratio of arranged marriage has decreased to 5% of the total marriages. In other words, nowadays those who do not aspire to getting married cannot marry easily. Survey data also shows that those whose annual salary is less than three million yen are not easily motivated to marry. In addition, when asked why they have stayed single, the majority answered that they "cannot find the right partner" (Figure 3).

Next, I will discuss the causes of declining birth rates in married couples. The ideal number of children for married couples is 2.42, but the planned number of children remains at 2.07 (The 14th Basic Survey on Birth Trends). The most common reason for not having the ideal number of children is "the high cost of childcare and education," which accounted for more than 60% of the responses (factor (6), Figure 4). The data indicates that families consider economic reasons to be the most important factor when they decide whether to have a third child or not.

With respect to the four incentive factors to counter the issue of declining birth rates as discussed in the previous chapter, the lack of "Extended targets of government policies" and "Measures to reduce financial burden in typical families and improve youth employment" can be explained as follows.


Figure 4: Reasons for not having the ideal number of children 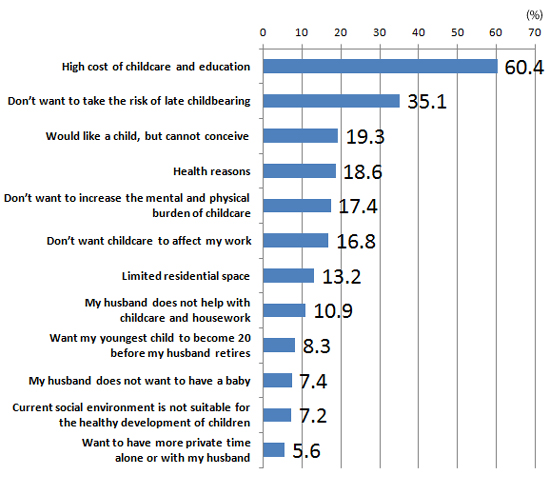 Source: "The 14th Basic Survey on Birth Trends (for married couples)" by the National Institute of Population and Social Security Research, 2011

Based on the above data, it is considered necessary to change the paradigm in which declining birth rates are seen to be caused by insufficient support to help parents manage both work and child-rearing, such as the establishment of day-care centers and the childcare leave system, while the number of parents (in particular, mothers) who desire to continue working during the period of child birth and child-rearing is increasing. The new paradigm would ascribe declining birth rates to changes in the employment environment of young people and difficulties in childbirth and child-rearing of typical families. Based on such a paradigm conversion, in addition to currently targeting "working married couples (full-time) in the metropolitan areas," it is necessary to expand the scope of countermeasures by targeting "unmarried young people (in particular, those who cannot have employment opportunities)" and "typical families (including those with housewives doing part-time jobs) who make up the majority of the child-rearing generation."

About 25% of working mothers continue their careers after having the first child, which has remained the same over the past 25 years (Figure 5). About 10% of working mothers who continue their careers use the childcare leave system. Meanwhile, about 70% of respondents answered they "retired due to childbirth" and "left work before becoming pregnant (including retirements upon marriage)," which indicates that the majority are wives who have not continued working. It is obvious that the proportion of "full-time working married couples" is quite small, and most typical families could not receive benefits from the government's initiatives to counter the falling birth rate.


Figure 5: Working status of mothers upon the birth of their first child 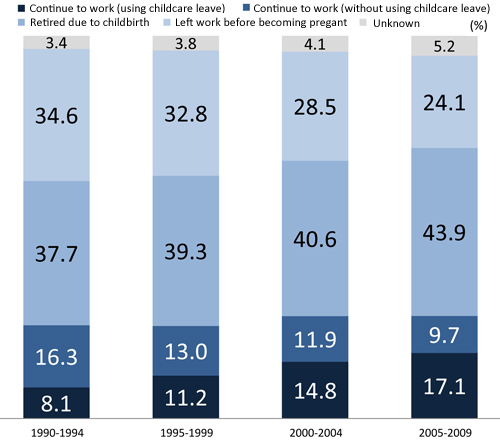 Source: "The 14th Basic Survey on Birth Rates" by the National Institute of Population and Social Security Research, 2011.

4. What is required to stop the birth rate decline?

To ensure that these countermeasures against falling birth rates are successful, it is necessary to first address the most serious causal factor that is identified based on data analysis. The Japanese government should tackle the issues of youth employment (the trend of unmarried population) and financial support for married couples, in particular, typical families, to help them have the ideal number of children.

Japan should learn from the initiatives taken overseas and start addressing this issue, starting with the most serious causal factor. To achieve this, I believe that it is important to first set a target figure for birth rate recovery. The specific target should be "fertility above replacement level at 2.07 by 2030," by eliminating obstacles in marriage, childbirth and child-rearing as well as providing sufficient support to encourage families who desire to have children. The replacement level is the fertility rate necessary to maintain the number of parent generations and the number of child generations at the same level. By setting a specific target figure, it becomes easier to analyze the impact of each causal factor that affects the declining birth rates and formulate effective countermeasures. After implementing measures, verification should be conducted based on the PDCA cycle. The specific target figure will help us identify and estimate costs, and hence, it becomes easier to obtain budgets. It is also necessary to establish "principles" along with the target figure. For example, we should respect people's decision not to marry or have a baby, and the society should agree not to interfere with their privacy regarding such a decision.

Setting a target figure for the fertility rate and implementing measures for the causal factors of declining birth rates, such as the increase in the unmarried population and the decrease in the number of children in families are urgently required. By comparing the target figure with the actual figure, we will be able to formulate more effective measures, so as to encourage and help people who desire to marry and have a baby.

Shigeki Matsuda
Ph.D., Sociology. Professor at Faculty of Contemporary Sociology, Chukyo University. Specializes in countermeasures against birth rate decline, childcare support, and family theories. Born in 1970, Professor Matsuda graduated from Hitotsubashi University (sociology). He obtained a doctoral degree in sociology from Keio University Graduate School. He previously worked as a senior researcher at Dai-Ichi Life Research Institute Inc. and was a member of the "Task Force for Overcoming the Declining Birthrate Crisis" of the Japanese Cabinet Office. Author of "The Theory of Declining Birth Rates" and "What Can Support Childcare?"
Related Articles:
Latest Posts in this Category:
Search