The Norwegian Man as a Father - Papers & Essays
中文
日本語

TOP > Papers & Essays > Parenting > The Norwegian Man as a Father

The Norwegian Man as a Father

Over the past twenty years, the participation of Norwegian men in child rearing and child care has changed dramatically. This change can be characterised as a movement away from the traditionally distant father, whose main task in the family was to financially support his wife and children, to becoming a father who is actively engaged in the daily lives of his children. The young Norwegian man of today is increasingly interested in his children. This entails playing a greater role in their daily care. Since 1993 in Norway, the father has had the right to take a paid six-week leave of absence from work, when his child is born. In the following years, the number of men who have done so has increased from 4% to 85 %.

Apparently, Norwegian men have discovered the positive sides of fathering and spending time with their children. Taking part in the child's everyday life is done with pride and joy. You will often observe young Norwegian men spending time with their children in city parks, or taking their boys and girls to a football game. You can also ring a door bell in the afternoon and find the father of the family preparing the dinner meal together with his children.

Still, in Norway, as in so many other countries, men continue to play a lesser role in child rearing than women. Norwegian parents have the opportunity to take twelve months paid leave from work, when a child is born, and they are, by and large, free to choose how to split the paid leave of absence between them. Even though we can document the fact that it has become more common for men to take longer leaves of absence from work, most men settle for the six weeks which are specifically reserved for the father. Women continue to take more than 90 % of the paid leave that both parents, according to legislation, can divide, when the child is born (Statistics Norway 2002).

This gendered practice continues after the parents return to work. Norwegian women have a high degree of participation in the labour market and 80% of Norwegian children between the age of one and six attends kindergarten. However, as many as 43% of the women (compared to 13% of the men) are working in part-time positions, reflecting the fact that the household and child rearing continues to be primarily a female responsibility. This practice also reflects how custody of the children is divided between the parents after a divorce. Even though joint custody has become more common, the main care giver most often continues to be the mother.

The fact remains that many men want to take part in bringing-up their children and this puts new questions on the agenda of society. A central problem is that men in our society often do not have enough time to engage properly in the everyday lives of their children. The problem of time is a central one because engaged contact with one's children cannot be secured by following a fixed timetable. Any father that believes that he can develop a strong tie to the everyday lives of his children, between 7 pm and 8 pm every evening (and only then) fails to meet an essential need of his children. Children need to have access to their adult care-givers when they actually need the care and concern of a loving adult. It is simply not good enough for a father to call his children from work in order to say good night. Fathers must be available and present in the 'here and now' of their children's lives. For some men, this is a problem because of their obligations at work. But many Norwegian men, far many more than was previously true, take a stand at work and argue that they are needed at home. They make it clear that their children need to be able to see and speak with their father in a natural way in their everyday home environment. This has become more accepted by Norwegian leaders. The Norwegian Crown Prince Haakon Magnus (34) and Norway's Prime Minister Jens Stoltenberg (48) have given interviews that point out that they have to give priority to their children in their own everyday lives.

Some men report that they find themselves placed on the margins of their families when their first child is born. In the very first days and months of the child's life, it seems natural that the mother is the central care-giver for the child. In Norway, a large proportion of mother's breast feed their babies, and this of course sustains tight bonds between mother and child, long after the physical separation of their bodies during birth. In the first days and weeks, the father may feel that all he can do is to assist the mother whenever she needs a rest. He may find it difficult to find his identity as a father and figure out what he can do in this new situation. Here we find what is perhaps, the most visible differences in the challenges faced by a mother and a father, when the new-born baby arrives. It seems easier to conceptualize the mother's tasks, because of her biological connection to the child and because of the socially defined patterns of motherhood. The father's tasks must, to a greater extent, be defined by the individual man as he becomes a father, given the traditionally more distant role of the father in Norwegian society.

As time passes, the father's role in the child's life usually gets easier to define. The father can increasingly take part in the life of the child. When matters are functioning well, the mother and father fill slightly different, but equally important roles as care-givers in the lives of their children. Studies reveal that men care for their children in a somewhat different way than women. An important part of the father's time spent with his children is spent in play. Perhaps a father's ability to play can be just what is needed to find an important connection to the lives of his children.

Even though we can see differences in the ways in which women and men relate to their children, the similarities we find are even more important. The primary concern for mothers and fathers is about providing good enough care for one's children. The quality of child care can be measured in a general way. Questions can be asked and answered about the ways in which matters are tackled in the parent-child relationship, the extent to which the parent is available for the child, and whether or not reactions to the child's behaviour are consistent, and so on. Good enough care includes managing concerns that are raised from a gender perspective. When a young girl or boy is given good enough care, he or she is able to incorporate and integrate good images of masculinity and femininity. Boys and girls need their fathers just as much as their mothers for this to happen. Fathers can provide their sons and daughters with good masculine role-models. They are equally useful as feminine role-models are, for them to develop into sound men and women.

Men, who choose not to take part in the upbringing of their children, sometimes fear that their masculinity would be at stake, if they did. This fear can be encountered and alleviated by engaging in discussions and dialogues with other men about fathering. Do men ordinarily talk about their experiences as fathers? This question is a hard one to answer. In some parts of the population, such conversations certainly do take place. For other men, however, child-rearing is never a theme they discuss in conversations. A few years ago, two Norwegian men wrote about their own experiences as fathers in two different books ("Pappaboka1) ", which can be translated as The Daddy Book and "Pappa for forste gang 2) ", which can be translated as A Daddy, for the First Time). They both wanted to help others to understand that men experience a major transition when they become fathers. By sharing their experiences of fatherhood, they hoped that the advice provided in their books would ring true. One of the authors, Finn Bjelke, in an interview, was reported to have said that he had no ambition to sell many books to men. But he hoped that women would buy the book and leave it on the living room table, so that their husbands could read parts of it, now and then.

Maybe men do not wish to talk so much about their experiences as fathers. One might imagine that some fathers have a greater urge to do things with their children and that this motivation is far greater than any needs they might have to speak about their experiences as fathers. On the other hand, many men who are engaged in talking about their experiences as fathers ? with other fathers ? find this to be a very rewarding and educational experience. By talking about fathering, men can prepare themselves, in a practical way and emotionally for fatherhood. Discussing fathering and child-rearing is actualized in a new way because of the increased participation fathers have in the everyday lives of their children. When fathers get together to talk with one another, there is a greater chance that they will be able to learn from one another's experiences. They can learn what to do and how to reflect upon their actions as a parent. The dialogue among men about fathering may facilitate a process that generates new understandings of how to be a good father and this is something that many men want to do.

There still are challenges to the participation of men in child-rearing. In Norway, most men and women support the idea that a father should actively engage in the lives of his children. This view receives support from feminists, who regard this as a way to provide women with equal opportunities in the labour market. It is also supported by those men and women who believe that this is important for both the fathers themselves and their children. It is important for fathers, because it creates a possibility for them to expand their conceptions of manhood and opens new possibilities for young men to find their own ways of doing or performing masculinity. It is important for the children, because the presence of men and women in the daily lives of children is regarded as being beneficial for their development.

One important positive consequence of the increased participation of men in child-rearing is that children are now raised by both men and women. This is certainly true to a substantially larger extent than it was before. The debate in Norway on this topic reveals different views on how fundamental the changes are. There is little doubt that women still bear the heaviest burdens when it comes to doing the work that is done at home. The fact remains that parallel to this development, young women are seeking education and work careers in a scale never before seen in Norway. We can see two parallel developments; young men engaging more than before in child-rearing, and young women in larger numbers are taking higher education. These developments promise further changes in future Norwegian society, and in Norwegian children's lives. 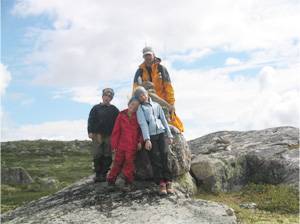