Toronto Nursery school teachers are experienced at integrating non-English speaking children. A child has the capacity to hear sounds and learn all languages at birth. If the child feels secure, he learns easily. Objects from home such as a picture or teddy bear and one-on-one attention from the teacher help him adjust at the beginning. Children don't pick up a language at the same rate; they understand the communication before they express themselves. Repetition is necessary. Children follow pier models. Studies show that when children are proficient in their native language, they pick up English faster and that the linguistic and academic skills are transferable. Maintaining the child's native language is essential to make him feel he is valued. Parents are encouraged to speak and read to him in his native tongue in order to sustain rapport, help him understand and appreciate his native culture and keep the first language from backsliding if the child feels he must leave the first language behind to participate in the new culture. Having two languages is a way to broaden knowledge and understand diverse cultures.

Footnote: The Province of Ontario, under The Day Nursery Act, licenses day care facilities (usually full day) and Nursery Schools (usually one-half day), private home care and some part-time programs, however municipalities are responsible for managing delivery of the services. Inspection takes place annually. Some day care facilities are funded jointly by the province and the city on approximately an 80/20 basis. Some licensed facilities are private, and parents pay $500 to $800 per child, per month tuition. Approximately 61% or about 180,000 children in Toronto have parents who require child care while they work. Only 28% of these children have access to the 50,000 licensed child care spaces because over 135,000 spaces are needed. Although there is provision for some to get tuition subsidies, there isn't enough money to cover all children who are from low-income families. The Ontario Government has a five-year plan to improve and expand child care.

The Capacity to Hear Sounds and Learn All Languages at Birth

Helping children acquire language skills is one of the goals of Nursery School programs. "At birth babies can hear all sounds in all languages, for example they can discriminate between the L and R, which is often confused by Japanese-speaking adults. The baby being raised in a bilingual household uses language rhythms to tell the two apart. Researchers have found that bilingual children often have translation equivalents in their vocabulary, such as house and maison, even among their first 50 words. Children learning a single language, however, resist learning synonyms until they are well past the 50-word stage." (Guy) Children move from using simple word combinations at age 2 to producing complex, complicated sentences by age 5. "Rapid word learning is characteristic of this period. Monolingual children in the U.S. learn about three new words a day." (Kan & Kohnert). "Students who have adequate schooling in their native language become more proficient in English much faster than the students with no schooling in their first language." (Collier) "Literary skills and academic skills have been found to be transferable between the first and second language." (Cummins)

Learns Easily When S/he Feels Secure

Kartina Hughes, Parenting Worker with the Toronto District School Board says, "To initiate the child invite the parents and child to tour the school, bring a transitional object, have the parent stay with the child for part of the period, find out what the child likes and dislikes and acknowledge that it will be difficult for both the child and parents." But learning a second language is not simply adding on English words. "To feel secure as a person it is paramount that the child knows his/her first language." The first language transmits his/her native culture and gives him/her an appreciation of who s/he is. "Encourage the parents to read to the child in his native language, to make rhymes and sing songs."

At Full Day Child Care, run as a teacher training institution by the Childhood Education Department of Ryerson University, teachers write key words phonetically for their use in speaking to the child in his/her native language, they employ picture words identified in both English and Mandarin, for example, employ taped stories and songs in the native language, use maps, they give the parents a list of words to translate for the child and, from time to time, they bring in workers from other departments who speak the child's language."

Giving attention to the child's native language makes him feel valued. It also may help prevent the loss of his first language, which is vulnerable, when many children decide they must leave their culture behind in order to move into the social environment of the new culture. Studies show that the child needs repeated practice in both languages to prevent backsliding. "Both languages are mastered more quickly when the nursery school provides teachers who speak the two languages." (Green) Whether it be a parent or a teacher the one-person-one-language approach is best when each person speaks a different language to the child.

Holding her Canadian Mother's hand, three-year-old Yao Yao bounced into the nursery school room at the Jewish Community Centre, Toronto. Mother Janet sat on a child-sized chair to help Yao Yao take off her jacket. "No, I don't want you to go." Yao Yao wiggled onto her mother's lap and clung to her neck. "This is where we come every day," Janet said. "Do you want to go outside?" (to the Nursery playground) "I don't want to." Yao Yao was still clinging. "What do we do every day?" Mom asked. With a grin Yao Yao lifed her face. "You kiss me and I kiss you." After the smooch she wiggled and stood so that Janet could make a quick exit calling, "I'll be back." "You can go upstairs to music class and sing. Line up with the others," her teacher said, and Yao Yao sashayed out into the hall. After the teacher delegated which children were to hold the doors, the line began to move, and Yao Yao skip-hopped off with her classmates.

Yao Yao's Mom went to China to adopt her last summer. Yao Yao had been living with foster parents who spoke no English and were teaching her Mandarin. Soon after her arrival in Toronto, she entered nursery school. Her teacher, Soraya Yacoubi, Assistant Director of the school, described Yao Yao's early days. "Her mother had sent her a teddy bear before she went to China. When she first came to nursery school, she carried that bear everywhere. I haven't seen it for some time now. I was assigned to be with her all the time. You must make the child feel safe. She must think, 'I can trust her.' She spoke her language and I spoke mine, and I made her laugh a lot. When she liked the place, language came very quickly. I could see that she had a good sense of humour, was curious and confident, ready to grasp. We arranged play one on one; I was always along at the beginning. I acknowledged that it must be frightening for her. Janet gave us a list of English words she knew like 'thirsty', 'pee pee'. I didn't make her repeat English over and over. When she said 'Outside,' I'd say, 'Oh, you would like to go outside. Let's go outside.' If she doesn't repeat it right away; it's okay. She feels safe. She likes books. She sees children who look like her in the stories."

Charlotte, another three-year-old adopted from China, arrived, looked around and when the teacher said, "Would you like to paint, Charlotte?" She went to the easel and put on her apron. "She understands everything we say but she doesn't talk yet," the teacher explained. "Children learn at different levels."

Three-year-old Kisho goes to the Kew Beach Montessori Nursery School. Ordinarily, when I visit he speaks to me in English as he shows off his toy and turns to speak to his mother in Japanese, but the time I joined him to visit school, he was having a bad day. Mom had been up much of the night with baby brother and he'd had a fretful sleep as well, so when Mom buckled him into his car seat, he protested in Japanese and cried. Enroute, Daddy tried to comfort him saying in Japanese that he'd see Mom again soon and that his school friends were waiting for him. At school, he reluctantly let Daddy put him down and accepted his teacher Pam's hand to lead him into the children's room. "Usually the children choose the work from the shelves that they want to do," Pam explained, but that day she said, "Kisho, you're having a bad day, aren't you? I know. You like to paint." She guided him to the easel where he donned his apron and made a picture of multi-coloured circles. Emma, an adopted three-year-old from China, was quick to his rescue. "It's very good, Kisho. You do very well." She put her arm around his shoulder.

When next Kisho chose to join numbered puzzle pieces so that they were in numerical order, he spread a mat on the floor, picked the box with puzzle pieces off the shelves and sat down to begin. Emma put her mat beside his on the floor. Kisho was fitting the pieces numbered "4" and "5" together but Emma held up the "1" saying, "What's this Kisho? This is 'one.' Start with 'one,'" and she put it in place. "What comes next, Kisho?" In spite of the teacher's directions to stay on her mat, Emma had moved to put her arm around him and gesture for him to put the "1" in place. Kisho stopped to add little pegs that fit into holes in the puzzle pieces. "Good, Kisho." the teacher encouraged. "One, two," and Kisho finished inserting the pegs while counting in English to ten. 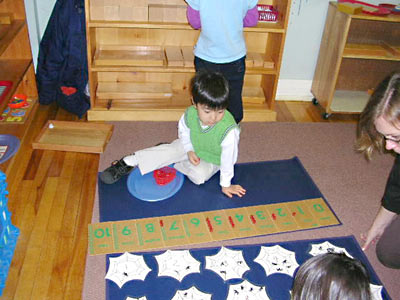 Joan Walder, Principal, described Kisho's school days. "We lay out their names and they learn to read theirs and put it in a box. They are taking attendance. The older children (four-year-olds) model. We communicate with gestures, name things, and keep the language simple. If he's using tongs, we say, 'Squeeze open,' and demonstrate, associate the words with gestures. Start with words associated with his clothing, his body. He understands everything. When he talks he mixes English and Japanese words, which is normal. He is using all the communication skills he has. He chooses to be beside a person who likes the things he likes and he's becoming more social like a four-year-old."

Guy quotes a parent of a bilingual child: "Although English is becoming a dominant language globally, having that mother tongue advantage is an important factor for later life. It's a gift that we have the opportunity to offer our child." Hidasi writes,"Conflicting cultural values - if handled and utilized successfully -might also serve as broadening knowledge, as a source of understanding diverse views on the world."