We recently had two wonderful experiences on the CRN English site. I was especially happy to receive the two e-mails because they were sent from London where I studied in the 1960s as a young man. The first e-mail was from Ms. Daisy Greenwell, a columnist for The Times newspaper of London. The second one was from Ms. Angela Cole, a mother of two children who lives in the northeastern part of London. Both e-mails happened to be in response to my English-language blog on November 28, 2008. Perhaps the two had communicated with each other before writing to me. To write this column, I contacted Nihon Hoiku Kyokai for research on facilities with both childcare and nursing home and was introduced to Ms. Akiko Kitamura, a researcher at Dai-ichi Life Research Institute Inc. In our conversation on the phone, she told me, to my surprise, that back in 2003 and 2005 the results of surveys had already been released, and they were very informative.

I was surprised, however, to find that in many cases, combining childcare and nursing homes was not considered in terms of its merit, but rather for the economic effect of combining these services. Doing this clearly reduces construction and operational costs, but integration is also said to require increasing the number of the workers.

Ms. Kitamura points out that with regard to the construction, integrating these services into one facility entails arranging the physical space, namely, the entrance, corridors, hall, cafeteria and even workshop areas, to encourage both direct communication between children and the elderly and indirect communication through sight.

As for the communication and interaction that takes place, some facilities have implemented various measures to encourage natural interaction, but there are others where almost no interaction occurs. Fortunately, Oizumi Gakuen, a facility operated by Benesse Style Care, is one of the former. I was very impressed with the range of interaction between children and the elderly, which occurred not only at regular events, but also on birthdays, at recreational activities based on celebrations such as the Doll Festival and Children's Festival, and during art-making and creative work, mealtimes, conversation, etc. 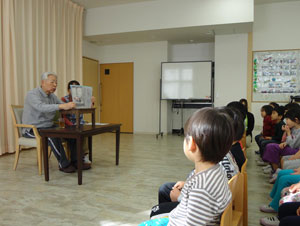 According to the survey on social welfare institutions introduced in Ms. Kitamura's article of August 2003, 310 or 1.4% of childcare facilities also housed a nursing home in 1997, but in 2000, this percentage had risen to 2.5% or 552 facilities, a 1.8-fold increase. This appears to be a trend that will no doubt continue throughout this century.

Society in the 20th century became more vertically stratified and lost a sense of humanity. Now in the 21st century, isn't it necessary to change our thinking to become more expansive and reach out horizontally? I have mentioned this in my earlier blog. Living together under the same roof gives the elderly something to live for and helps the children grow mentally and emotionally. So what should be done to improve these integrated facilities? This is what we need to think about now. It is time to first, gather information, discuss the issues from various viewpoints, and consider the ideas offered from the perspective of Child Science.

The November 26, 2012 issue of the AERA magazine carried an article on a nursery school in Setagaya Ward that had received complaints about how loud the children were. It made me think that Japan had really changed. The falling birthrate is a sign that Japan is really on the decline, but the way to change that is by creating a society with children. It is well known that when foreign people visited Japan before the Meiji era, they were impressed with how bright-eyed Japanese children were and how well they were cared for. In order to return to such a society, we need to apply the perspective of Child Science when thinking about the kind of administrative arrangements that can bring children and the elderly together in society.