Observing Experimental Classes at the School of the Five Senses: The Importance of Affective Information in Education - Honorary Director's Blog
中文
日本語

TOP > Honorary Director's Blog > Observing Experimental Classes at the School of the Five Senses: The Importance of Affective Information in Education

Observing Experimental Classes at the School of the Five Senses: The Importance of Affective Information in Education

On the 13th of January, I had the opportunity to observe an experimental class for 100 fourth graders at the School of the Five Senses given at Akai Elementary in Iwaki, Fukushima Prefecture. It provided much food for thought, and I decided to make it the subject of my Koby's Comments. 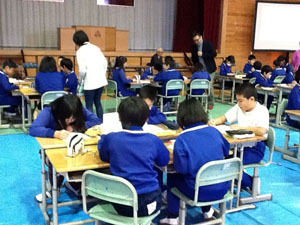 The School of the Five Senses is a project of Mr. Satoshi Nakagawa, product designer and design engineer, who is also the CEO of tripod design Co.,Ltd. and a special appointed professor at the Faculty of Engineering, The University of Tokyo. The school's education curriculum offers classes that seek to broaden children's thinking and creativity.

In a gymnasium, children are shown videos and listen to sounds and music. They then express what they felt with pictures or colors and verbalize using words and different forms of onomatopoeia and mimetic language. Here is what some of the various sessions covered.

1. Children looked a photographs of "a girl who looks cold," "a man with an umbrella almost blown away by the wind," "a curtain fluttering in the wind coming through a window." They were asked to provide onomatopoeia for the different sounds of the wind in the photographs.

2. Children listened to songs such as "Rainy Weather," a famous song for children in Japan, and were asked to describe the sensations of the onomatopoeia in the lyrics such "picchi-picchi, chappu-chappu, lan-lan-lan, (pitter-patter, drip-drip, splash-splash, humming)."

3. The children looked at pictures of a boy jumping into a pond from a high place or pine crickets and expressed what they saw using onomatopoeia. Compared to Tokyo, Iwaki has a rich natural environment, so I was surprised that some children did not know how to describe the sound of a particular insect in a photograph.

4. Children listened to sounds in daily life and then answered what they are or chose the matching onomatopoeia. These included the sound of a bicycle in motion, boiling kettle, car brakes suddenly slammed on, plates being stacked, deep-frying tempura, cutting cellophane tape, pulling tissue paper out a box, crushing a PET bottle, and sharpening a pencil in a pencil sharpener.

5. The children drew a G clef, starting at the top and then from the bottom. Then they tried simultaneously writing with both hands, from the top to the bottom then from the bottom to the top. Using both hands, they drew a butterfly shape, and using different hands, they drew different shapes, for example, a square with the left hand while drawing a triangle with the right hand, and drew a house with two different colors, red and black, for the roof and below, using different hands. 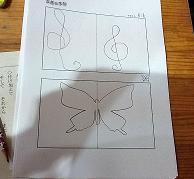 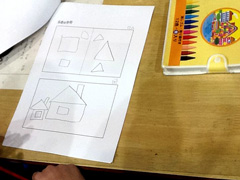 6. Children were given a color map, and as they listened to sounds and noise, they marked the corresponding color.

7. As they listen to sounds and music, children drew whatever they wished. 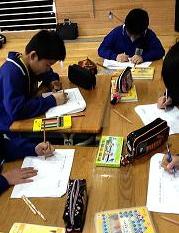 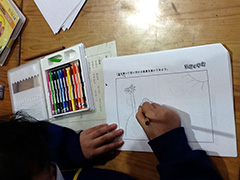 8. They are given a roll of steel wire measuring almost 2 meters. While listening to music, they unroll the wire and make different shapes with it. 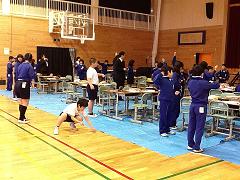 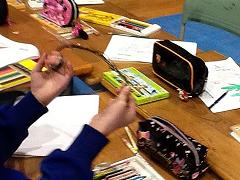 The children were initially nervous, but within thirty minutes they were freely responding to Mr. Nakagawa's questions and talking with the other children sitting at their table, and thoroughly enjoyed the 1.5-hour class. Some of the children even broke away from the group and started dancing to the music on their own.

I did not ask Mr. Nakagawa specific questions about the teaching methods in these experimental classes and the curriculum, but they seemed focused on heightening reason and intelligence, which are crucial in education, through aural information. The class in which the children drew a G clef in 5 did seem to have a completely different objective. There are also plans to include children with PTSD as a result of the earthquake and to clarify the development of the condition. 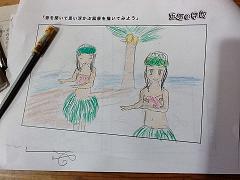 Taking information as a keyword, let me try to define school education from my own viewpoint. Education consists of knowledge that children should be taught, in line with their age and the goals of education. This education (pedagogical material and methods) is designed to stimulate and link the programs of the mind in the neocortex of brain that support learning, thinking, mimicry, memorization, etc. and the programs of emotion that are also inborn (the limbic system controlling emotions of happiness, sadness, etc.) and the body (brain stem controlling life functions), and then to organize them at a higher level that will allow children to function as adults in society.

Information that is designed and processed for education can be separated into rational information that is decided on a yes-no basis and thermodynamically decreases entropy, in other words, that reduces indeterminacy, and affective information related to human emotion such as happiness or sadness. Namely, it can be divided into information for programs of the mind related to reason and intellect in the neocortex and information for programs of the mind related to instinct and emotion that involve the limbic system. As such, Mr. Nakagawa's School of the Five Senses is a good experiment in learning that encourages us to think about affective information in education. While the class in 5 above that requires children to use both their right and left hands may not be related to affective information, it does focus on question of the right- and left-brain. It raises issues that I will address on another occasion.

The behavior of fetuses and newborns seems to indicate that the basic programs of the mind are innate. Acquired over the course of evolution, they are genetically determined. This includes not only the programs of the body such those that move the heart, and arms and legs, but also those programs of the mind associated with pleasure/displeasure as we see in the satisfied smile of a fetus. After birth and with upbringing, the programs of intellect and reason become integrated, so that baby smiles in response to soothing and cuddling from the mother, the elementary school student laughs at cartoons and comics, and the high school student listens to rakugo and finds it funny. In other words, laughter develops.

In this, we can see that the basic program of laughter in the fetus becomes more complex as the fetus develops and it becomes integrated with the program of the intellect in the course of development, and then develops into the adult's program of the intellect. This can be compared to a phenomenon that we see in proteins. Proteins that are directly made by genes do not function separately and on their own, but when several are combined they take on a function as molecular for the first time, with some, for instance, functioning in a manner similar to hormones.

Mr. Nakagawa's experimental class focuses children's attention on onomatopoeia in everyday life and has them use it in pictures and color. Creating shapes with steel wire is such one example. This first provides affective information through sound. Then, the program of the mind, which operates on the basis of logical and affective information, then also works on the program of the body, so that children express themselves in painting and with color. This was a method of moving the programs of the mind that had hardly been tried before in our daily lives or in the classroom.

From another point of view, in order to improve the functioning of the "vital-motor brain" of the body that is similar to that of our fish and reptilian ancestors, our brain evolved various programs of the mind. First it evolved the instinct-emotion brain, similar to that found in primitive mammal ancestors, which is primarily the limbic brain. Later, it evolved the intellect-rational brain located in the neocortex of the brain. In this way, the human brain equipped with various programs of the mind evolved. These three have combined to form and function as our brain.

Onomatopoeia, which happens to be particularly common in the Japanese language, is thought to develop considerably during infancy. This may explain the importance of the School of the Five Senses for education in Japan.

In the experimental class, there were also time to evaluate what each of the children had done and their pictures. Openly discussing their achievements or accomplishments and the relation to family environment seemed to point to ideas for the development of new methods of education. That was because I could see in their pictures how they were related to the local areas and the family.