Experiment Study on Visual Self-recognition of Preschool Children with Autism

The purpose of this research is to establish whether preschool children with autism can distinguish between themselves and others, and furthermore, the difference between mirror self-recognition and video self-recognition. The subjects were 6 preschool children with autism whose average mental age was 23 months. The result of the two experiments and coding analysis using a 1-second time scale of the process showed that the subjects had the preliminary capability of distinguishing between the self and others. They paid more attention and showed more positive emotion to video self-recognition than to video images of others.

1. The problem
Visual Self-Recognition (VSR) refers to the cognitive capability of a child to recognize him/herself in a medium, such as a mirror. This kind of early self-recognition capability is the basis of psychological development such as self-consciousness, self-monitoring, self-caring and self-management. As pointed by Ornitz et al., the inability of autistic children to communicate well with others is often attributed to their inability to distinguish the self from others.

Past experimental research on VSR has focused on the following two problems: one is whether an autistic child has VSR and the other is the relationship between VSR ability and other abilities. Most of previous research, however, tried to measure the ability to distinguish only by observing how the subjects reacted when they stood in front of a mirror, without a comparison with their cognitive reaction when standing before others. It is difficult to say whether autistic children have real VSR or not. Furthermore, these conclusions were based only on the result of whether or not the subject was able to wipe off a mark on his/her face. The psychological activities behind the cognitive process have not been explored deeply. Third, most of these studies only observed the subject's reaction in front of the mirror, where the perceived "self" by the subject was a static and present one. Consequently, we cannot know the cognitive capability of autistic children toward a dynamic "self" over a prolonged period.

In order to address the inadequacy of past researches mentioned above, this study explored whether preschool children with autism have a primary cognitive capability to distinguish between the self and others, and investigated the difference between their mirror self-recognition and video self-recognition by comparing these two kinds of cognition.

2.2.2 Procedures
In a quiet room at each of four kindergartens attended by the subjects, the experimenter showed a video which had recorded the subject together with his/her peers 15 minutes earlier. The video player was placed at the subject's eye level, at a distance of 35 cm. The main experimenter, sitting beside the subject and facing the same direction, asked "who is it?" repeatedly during the video. The co-experimenter, sitting opposite the subject, recorded the entire process using digital video camera. The videos of "self-others" and "others-self" were presented in shifts in a random manner.

2.3 Data collecting and coding
All of the recorded content was coded and analyzed according to the Coding Sheet by the second.

Given the purpose of experiment, the Coding Sheet was composed of "visual behavior," "expression" and "language." Each of the items was divided into two categories--"toward-self" and "toward-others." The visual behavior was divided into "glancing," "watching," and "close attention." The actual situation during the experiments was coded by "visual behavior," "expression" and "language," respectively.
(Here the detailed procedures, data collection, processing and coding are omitted.)

2.4 Data processing and reliability analysis
The reliability coefficients of the two experiments in this study were 0.85 and 0.91, respectively. 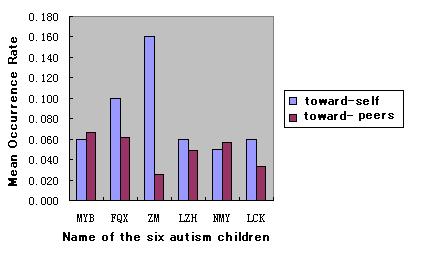 In contrast to Figure 1, Figure 2 shows that among all six children, watching the self occurs at a higher rate than watching peers.

To identify a possible difference between APC's visual behavior toward the self and others, the rates of occurrence (the frequency of the behavior) were examined and compared. Table1 shows the Means and SDs of the three visual behaviors.

Note: The occurrence rate was calculated by 5 seconds
The total observation time for visual behavior was 150 seconds, of the self and others, respectively.
* p<.05   **p<.01

The results in Table1 showed that the frequency rates of the three visual behaviors toward the self were all higher than toward peers in APC.

According to the above results, it is implied that the six APC have developed the primary recognition to distinguish between the self and others. Table 2 The correlation coefficients between APC's three visual behaviors toward self/peers and their emotions.

Table 2 shows that the correlation of APC's visual behaviors toward self/peers and their emotions differed not only in degree but also in direction.

From the different correlation between the same behaviors and emotions, it is implied that autistic preschool children have developed cognition that discriminates between the self and others to some extent.

2.6 Discussion
This experiment showed that the autistic preschool children gave more attention to the videos of the self and expressed more positive emotion while watching videos of the self, and attention to the self and peers showed a different correlation with emotions both in degree and direction. All of these results suggest that the autistic preschool children whose supposed mental age is 23 months have already developed a primary discriminating cognition between the self and others, although it might still be in an indistinct, rudimentary stage.

Although the conclusion is based on a small sample, it is significant because it differs from the view that attributed social developmental disorder in autistic children to a lack of discriminating cognition between the self and others. It also provides evidence on which future feasible intervention can be based.

3. Study 2. Comparison of mirror self-recognition and video self-recognition
To clarify the difference in cognitive process between autistic children's visual self-recognition of the static immediate visual self and the dynamic time-delay visual-self in the pre-language stage, the study compared the two psychological processes to see if there were differences between them. The reliability coefficients of the two experiments in this study were 0.85 and 0.91, respectively.

3.2.2 Procedures
In each of the four kindergartens attended by the subjects, about 50M2, one mirrored play room and one quiet room were used to conduct the mirror self-recognition experiment and the video self-recognition one, respectively. (Here the detailed procedures, data collection, processing and coding are omitted.) 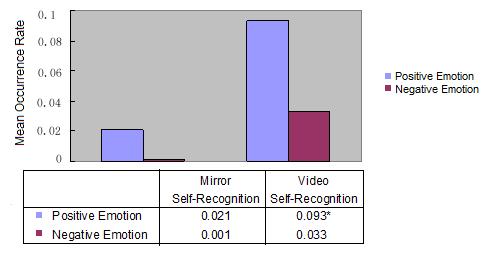 The results as presented in Table 3 indicates that the correlation coefficient between "glancing" during video self-recognition and "approaching the mirror" during "mirror self-recognition" was high, up to 0.90.

Additionally, "approaching the mirror" during mirror self-recognition was also related to "watching" during "video self-recognition" to some extent. The correlation coefficient was 0.38.

4. General Discussion
In this study, the cognitive feature of visual self-recognition was explored through two experiments of six autistic children.

The results showed that even autistic preschool children whose average mental age was only 23 months had developed the preliminary capability of distinguishing the self from others.

This conclusion is based on the fact that, in visual behavior, they spent more time in watching the video of the self; and in emotional expression, they expressed more positive emotion when watching it.

The results of the experiment suggest that the recognition of the self and other in autistic preschool children is not so indistinct that they are indistinguishable, but this distinction is at a vague and incipient stage. This research indicates the need to identify their critical period for social cognitive development to improve their level for self/other recognition.