Report from the Disaster Area Part 5: What is a True Support for Patient Mothers in Disaster Area? - Projects
中文
日本語

TOP > Projects > Child Science and Great East Japan Earthquake > Report from the Disaster Area Part 5: What is a True Support for Patient Mothers in Disaster Area?

The support project for postpartum care by the Primary Care for All Team (PCAT) titled “Tohoku Sukusuku Project (Tohoku Well Baby Project)” has mainly provided care for postpartum mothers and their children, which tends to be neglected by the local health care system, just after the earthquake disaster. Women had tried to be patient for a long time without complaining about reproductive health issues (menstruation, pregnancy, childbirth, etc.) rationalizing that those are natural problems, not illnesses. When women give birth and have children, their child-rearing is supposed to be filled with joy. However, it must be turned into a pain with full of loneliness, if they cannot consult someone about their mental and physical problems. This is a report about the importance of primary care doctors who provide advice on poor physical condition and minor health problems, and about how supporters can establish rapport with people in the disaster area. It is based on my real experience of learning “supportology” and its application to practical situations.

People in the disaster area are ordinary people like everyone else, living their ordinary lives

In my communication during prenatal care in the disaster area, I found the patients bewildered by healthcare professionals and the media who were eager to provide support. Of course, people in the disaster area who lost everything they had would appreciate any support. However, they are not tragic victims like a devastated drama queen in the movies. They are just ordinary people living their ordinary lives. I have felt that from the beginning. Basically, all survivors of the tsunami disaster are fine and normal, being characterized by "Green or Black" Triage Tags, which was mentioned in my last report. They were "fine," but that does not mean they were "healthy." They were neither severely injured and threatened their lives nor requiring advanced treatment. However, they had many things to worry about. They truly need primary care doctors whom they could consult just about any simple and basic issues, for example, nutrition and wellness cares for their family.

Particularly, mothers who have babies and infants need such family care physicians Rather than emergency disaster medical team for heavily damaged patients. People around these mothers complain that the children are noisy and the babies' night crying prevents them from sleeping. Mothers cannot bear such complaints during a long-term evacuation, and end up going back to their "partially destroyed but habitable" home. As a result, they cannot receive aid supplies and distributed meals as before. They also lose their network of "mom buddies" and ties to the community, which makes them feel lonely and depressed. As they think their situation is better when compared with other disaster victims' situations shown on TV, on the other hand, they are overwhelmed by the image of disaster victims held by media. They cry out on the inside insisting, "I am just an ordinary person."

Currently, mothers in the disaster area feel hesitant to meet different people. Although they are grateful for various kinds of support, they sometimes get tired of meeting people due to the pressure of talking about their experience of being a victim of the disaster. In addition to their relatives, friends, and acquaintances; many different people including public health nurses and public administrators from other prefectures visit them every day. Some mothers decided not to see anyone because they were stressed by thinking, "How many times do I have to talk about the same thing over and over?" "I want to talk to people whom I want to talk to, whenever I feel like talking." and "I don't want to talk about this tragic, drastic experience over and over just because that is what people want to hear." However, acknowledging the generosity of the people, most of the mothers cannot refuse to meet people.

In addition, the fact that the earthquake occurred at 2:46 pm was the key for them to keep an extension of the ordinary life of the victims of the disaster. The time has stopped for the elderly people who were resting on the reclining bed, for the pregnant women who were shopping, and for the children who were going back home from school. Electricity and water supply were also cut off. However, they had to continue their ordinary lives.

There were pregnant women who tried to endure eczema and lower back pain, because they think, "This is not an emergency." Some people postpone surgery and medical treatment that were originally cancelled due to the disaster, because they think they cannot consult a doctor about such a small thing when doctors are dispatched mainly for people in the acute stage of a medical problem. Other people dare not say that they have asthma or constipation. Usually, if a child falls over and cuts his/her hand, or a child is coughing and wheezes sickly, mothers could take the child to a nearby pediatrician. However, the clinic has been washed away now. Although there were many doctors in an evacuation center, mothers hesitated to seek help because they think the doctors are there for patients with more serious conditions.

Doctors who can play a role as a "family physician" are needed for such people. It might be important to tell them that: "You are already entering into the chronic stage." "You can go back to your normal life." and "You can seek help for anything to be concerned about." The pain and small injuries in ordinary life require basic treatment, and are not dramatic or something to make a fuss about, but something to have to be cared about the most.

Usually in Japan, women, pregnant women, and mothers have been taught that they could not fully express their concerns about menstruation, pregnancy, and postpartum conditions for a long time from the pregnant period to the postpartum period, because they think pregnancy and childbirth are not disease. Women were actually very patient in that situation and devoted themselves to caring for their family. That is because what they had been trained and taught goes beyond "Patience is virtue" to "Impatience is shame." We found it was important for women to have health care workers to consult their physical and mental worries in a private area as comfortably as possible especially at these situations. 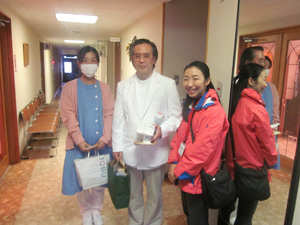 With OB-GYNs at the disaster site

While I learned a lot through participation in support activities, I came to learn about an academic field called "supportology." For example, supportology systematically explains that a cooperative relationship cannot be established if supporters try to categorize the situation and treat the people with bias, preconceptions, and expectations; because the people feel they are manipulated.

In the case of the Great Hanshin Awaji Earthquake, it was already pointed out that the tone and the pace of local disaster victims were different from those of volunteers from outside. Supporters visit the site in high spirits saying, "We came all the way here. Is there anything we can do for you?" and were eager to do something special. However, the local people live their own lives and do not have any special requests. My co-worker who is a family doctor says, "It is not the best to provide the best thing." Although the most advanced medical care, supplies, and the best skills are provided, people do not need them if these are temporary and do not match their ordinary life. It is actually very difficult to establish the equal cooperative relationship without drawing a line between "supporters" and "disaster victims" and to clarify what kind of support is needed.

In the future, I plan to establish the system using telephone or Skype that allows the doctors and birth attendants, who are already dispatched to the site to take care of the same patient on a one-to-one basis every week. . Of course, after the emergency rescue in the acute phase, birth attendants are busy going back to their work and cannot visit the site regularly. However, it is a pleasure to have one or two e-mail pals in the site. In fact, I have kept in touch with several expecting mothers whom I met at the disaster area. I feel happy when I hear from them by cell-phone or text-messaging and know that they have given birth or moved out of the evacuation center. Some messages attach the baby's picture. 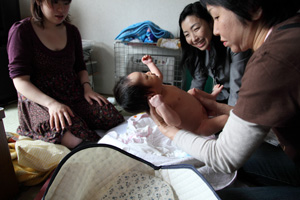 Visiting a newborn with the midwives

"Always try to be valuable to others." "Try not to think that everything is understood." "Try to understand what brings benefits to others." "Keep in mind that supporters should not provide the answer, but share the process of solving the problem together with the disaster victims." Remembering these things, I am hoping to bring out the best in local people to empower their strength and beliefs.