Primary Care for All Team (PCAT) has provided comprehensive medical support in collaboration with people of various occupations immediately after the Great East Japan Earthquake. Unlike ordinary activities for disaster medical relief, the conditions caused mainly by the tsunami rather than by the earthquake require unusual medical response and medical support for people in the chronic stage. In addition, it is necessary to respond to the public health needs such as living circumstances in evacuation centers and the management from the viewpoints of preventive medicine and community healthcare. It was important to respond to real needs by examining problems, including early detection of the need for nursing care among the elderly who comprise of a one-quarter majority of Japan as a country with advanced welfare systems, and the visiting care at the evacuation centers.

With a sense of increased crisis, the Primary Care for All Team (PCAT) started providing support to prenatal care in the disaster area from two weeks after the disaster. Care for pregnant patients and infants at the disaster area had been provided insufficiently, as reflected in the low birthrate. Our support project for expecting mothers titled "Tohoku Sukusuku Project (Tohoku Well Baby Project)" has dispatched birth attendants and doctors to the disaster area for these six months on an ongoing basis, so that pregnant women and postpartum mothers could consult them. 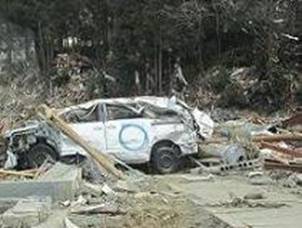 Minimisanriku-cho two weeks after the earthquake 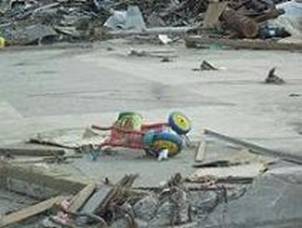 A crashed tricycle in Minamisanriku-cho

Since I have started visiting the disaster area regularly, I have come to learn that the disaster with earthquake and tsunami was significantly different from common disasters in the past.

First of all, damage was caused mainly by tsunami. This was the key characteristic that differentiates it from the damage by earthquakes.

The common disaster cycle is divided into: hyperacute, acute, subacute, and chronic stages. 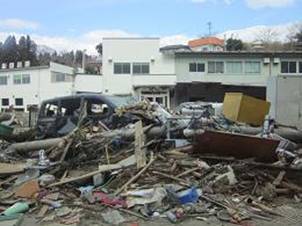 Ishinomaki-city four weeks after the earthquake

One specific characteristic of this disaster cycle was that tsunami was a main cause of death. Therefore, only healthy people could survive in the cold weather after the tsunami. In this case, triage was not really necessary because most of the people in the hyperacute stage were tagged with Green (healthy) or Black (dead). In other words, people either lost their lives or lost the foundation of their lives. Although people were in the acute stage, they needed internal medical care in addition to treatment for injuries. This reflects the aging society with epidemic chronic illnesses. Moreover, for the people in the subacute stage, the people who require nursing care were highlighted as the target of support, resulting from the aging society and the advanced welfare society. Unlike common disasters, internal medical care and medical support for the people in the chronic stage became highly needed immediately after the disaster.

Furthermore, medical care and management of evacuation centers from the viewpoint of public health were crucial, in order to take care of not only injured people but also healthy evacuees. Originally, PCAT is a group of generalists who specialize community healthcare and preventive healthcare called "Primary Health Care." Among family doctors, there are many doctors who are knowledgeable about such primary health care. They have caught the needs of public health services such as the management of evacuation centers. In a country with advanced welfare systems, most of the potentially vulnerable people during the subacute stage were those who required nursing care. Since PCAT members are familiar with community healthcare, home medical care, and medical care for the elderly; they responded to real needs by addressing problems, including early detection of the elderly in need of nursing care and the home visit to patients at evacuation centers. This coincides with the theory of how to improve health conditions of people in the community, which is well known in the field of international health. 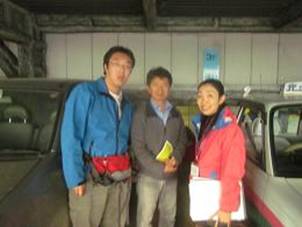 The author with the members of Disaster
Countermeasures Office in Miyagi, UNICEF

In addition to tsunami, the damage was also caused by nuclear powerplants. The disaster following a level 7 nuclear accident that occurred in Japan required a different approach which we could not imagine in the past. It did require us not only to save lives of people in the acute stage, but also and rather to provide care for people in the chronic stage.

The original report was posted on the CRN Japanese site in May 2011.

*1 Triage Tags
"Triage" is defined as the decision regarding the degree of priority of medical treatment for injured and sick people by tagging them with either Green (healthy/sound), Yellow (treatment required within several hours), Red (treatment required immediately), or Black (dead). These tags are called "triage tags".

*2 Tsunami Lung
The inflammation caused by contaminated substances such as pathogenic organisms and heavy fuel oil in seawater that has entered into the lungs.

- The manual of medical aid in natural disasters

- The manual for public health nurses in large-scale disasters