After the earthquake, I was dispatched to the city of Ishinomaki and the town of Minamisanriku to provide support as a member of Primary Care for All Team (PCAT) between April 1st and 3rd, 2011. Here I report on activities to determine current maternal and child health conditions in the disaster area and the needs of pregnant women and women resting after childbirth. It is difficult to decide how to handle issues related to the future living environment of pregnant women who are vulnerable to a number of risks. The creation of a living environment needs to be prioritized, so that they can prepare for childbirth without anxiety. It is also necessary to provide them with peer counseling (a place where people facing the same situation can communicate), opportunities to help others, and advice on alternative methods for nutritional improvement.

After the earthquake, I had been thinking about how pregnant women and women in the postpartum period were doing in the disaster area. I signed up with several organizations to be a dispatched doctor, and received an assignment from PCAT. I was dispatched to the city of Ishinomaki and the town of Minamisanriku for three days from April 1.

My mission was to understand the current condition of maternal and child health in the disaster area and to learn more about the needs of pregnant women and women in the postpartum period. 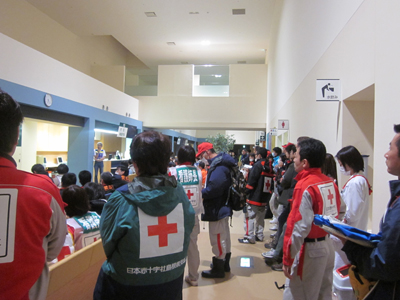 The meeting of the support team in a disaster area

1. Pregnant women, despite being classified in one category, each have different family environments, making future measures difficult

If a pregnant woman only has to care about her unborn baby, it is possible to stay with relatives for before and after childbirth. However, some of them have older children who attend school. Some want to go back to the disaster area after childbirth, so that their older children do not feel lonely being separated from friends. Others might have concerns about their husbands' job. There are endless issues they have to face in the uncertain situation. When looking for finding an evacuation center or temporary housing, it must be located near a hospital. If not, they will be constantly worried as they reach full-term. Even though they know they will not be able to live in an evacuation center after childbirth, the hospital will release them three days after childbirth. If they go back to temporary housing or a relative's house, they will have to take care of their older children and do household chores. If only there were some place to rest and relax after childbirth...

Miyagi Children's Hospital in the city of Sendai and JA Yamagata Central Association "Kyohdoh-no-mori (Trees of Cooperation)" have established a project that allows pregnant women to live together with family members without anxiety before and after childbirth. We provide pregnant women in the disaster area with information on this project. They are able to spend the important period before and after childbirth without anxiety, if evacuation centers and transportation are ensured through close cooperation with government and support organizations.

2. Need for a pregnant friend in the same situation; Need for professional advice

Since many people have been evacuated from the disaster area, pregnant women are separated from people close to them. The telephone lines are not working either. For women, talking with friends who can understand their situation and efforts is more relieving and consoling than anything else.

According to conventional wisdom, the dietary environment in the disaster area is a cause for concern because it is not healthy for pregnant women. They learn in parenting classes that pregnant women should eat food containing a lot of iron and fiber, but many situation do not allow them to follow such advice. In fact, I was often consulted by pregnant women who were worried about their diet.

From my experience as a pregnant woman and professional viewpoint as a doctor, pregnant women in any situation need to do the following.

"Who you know is more important than what you know." During my stay at the Harvard School of Public Health, which connects medical care to business closely, I have learned the importance of networking at every opportunity. I plan to create opportunities to help pregnant women access information in the disaster area, through peer groups or places to consult professionals.

I now have many ideas. I am wondering if we can establish the Pregnant Women's Association in cooperation with experienced mothers, ob-gyn doctors, pediatricians, physicians, ophthalmologists, maternity nurses, and nutritionists. I am also thinking about a networking method utilizing telephones, e-mail, as well as a mailing list that can be send to a mobile phone, so that the pregnant women can overcome the difficulty of meeting in person due to the lack of gasoline and other obstacles, etc.

3. Desire to help others

People in the disaster area are helped by supporters all the time. They feel grateful and sorry. They cannot complain even if they cannot take a bath nor sleep well.

Rather than just being helped by others, people in the disaster area can regain self-respect by helping others. For example, a pregnant woman I met at an evacuation center asked me to inquire about her sister's friend, who was also pregnant and whose due date was about the same as hers. When I said that I would urge the prefecture to create the safe environment before and after childbirth, she asked me to do the same thing for other pregnant women in need. She was able to think of others though she herself was having a hard time. I was touched by her warmth. I said "I will do something, so don't worry!" I keenly realized that having a sense of being valuable to others is important for people in any situation.

As mentioned earlier, the establishment of a casual network among pregnant women in the disaster area is also important. When pregnant women become able to support each other in a spirit of volunteerism, for example, by collecting and sharing unused baby goods, they will feel happier.

4. Concern over imbalanced diet due to long-term stay at evacuation centers

The following nutritional problems were observed in the disaster area.

Depending on the circumstances, pregnant women and postpartum women should take vitamins in a different way from what they are used to. For example, fruit juice, vegetable juice, fortified rice, nutritionally fortified gelatin, snack bars, and energy drinks will supplement nutrition when it cannot be adequately received. Some might feel uncomfortable taking pills, but they should consider taking multivitamin supplement. It will not cause any harm to the baby if taken in the recommended dose. In addition, it is preferable to stay warm when lying down. At the same time, pregnant women are susceptible to "economy-class syndrome" because their blood tends to clot easily. This can be prevented by elevating the legs with a pillow or moving your toes and heels frequently.

I went to the disaster area to help people, but I am embarrassed to say that I was often encouraged and learned from them.

I cannot forget the creativity of the children in one evacuation center. When I was providing maternal care, a girl beside me, who was a second grader in elementary school, made a birthday cake for her grandfather. It was actually a plastic bowl placed upside down with candles made from folding paper. The day was her grandfather's birthday. She created a birthday cake out of nothing but scissors and the materials she could get from the evacuation center. She also made a gold medal from folding paper. I was effusive in my praise for her creativity, and the girl seemed so pleased. Her pregnant mother also praised her by patting her on the head. I felt a lump in my throat. I took many pictures of the family and told them I would send copies to them. Such family pictures are precious because almost all of them had been washed away by the tsunami. I truly felt that "precisely because we are in such a difficult time, children are the hope of future" and "the existence and the inspiration of children make everyone feel happy." In the gymnasium where people feared aftershocks and had to wait in a long line for food, the family sitting around the creative birthday cake seemed very heartwarming. 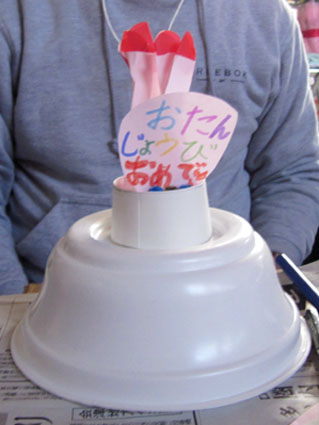 In addition, there were some accommodation facilities that opened their baths to the public for free. People were bathing in the bathtub without saying much. However, the atmosphere suddenly changed when babies came. Since I was an outsider, I did not know how I start a conversation with the people. In the end, I was able to break the ice by saying "Your baby is cute!" "How old is your baby?" "Your baby looks plump and healthy and so happy. You must be raising your baby very well!" or "Are you breastfeeding your baby? Yes? Oh, that's great!" These exchanges relaxed us and became good conversation starters.

When we try to encourage families in the disaster area, I think it is good enough to tell the pregnant women that "I really care about you." "Please do not feel bad about being taken care of by others." "Raising a baby in your womb itself is a very hard and valuable work." "Please accept people's kindness at least during these few critical months of pregnancy." Rather than cheering them up or expressing our hopes to them, I felt a warm emotional communication with them just by saying "It was nice meeting you." and "I will be thinking of you." The volunteer members for the medical care

The original report was posted on the CRN Japanese site in April 2011.