Is Omicron that Scary?

Something has been bothering me for quite a while. It has to do with the overall stance taken by the mass media in Japan when reporting on the Coronavirus, in particular, the Omicron variant.

First, there is the way of reporting the number of infections. The number of people infected is rapidly rising, so using the phrase "record high" is somewhat understandable. However, when the number of cases has declined over the day before, the expression "remains high" can suggest an overall rise. When we think that the numbers are decreasing a bit, we hear that "We had the highest number since (a certain previous date) of all Mondays" or the current number of cases has been "over 10,000 for three consecutive days." It appears that everything is intended to give the impression of an overall increase. Of course, the media is probably using slightly strong language so the people will remain on guard. In other words, being cautious is the best action.

Recently, CRN took the lead in conducting a questionnaire survey of children's wellbeing (happiness) and resilience during the COVID-19 pandemic in eight countries in Asia, including China and Indonesia. We received over 3,000 responses from mothers with children between five and seven years of age. In order to assess the effect of the pandemic, we asked all the mothers about their degree of concern regarding a future rise in COVID-19 infections and their satisfaction with the overall response of national and local governments. Among the eight nations, there are also some countries like Malaysia and Indonesia where the COVID-19 had spread over a period of time and the situation was more difficult than in Japan.

The results were surprising. Although the per capita number of infections and deaths due to COVID-19 in Japan was not at all high, Japan ranked the highest in mothers' degree of concern and lack of confidence in measures taken by the government. Furthermore, looking at the concern voiced by mothers and the relation to resilience in children, although there was not a significant difference in Japan, the data for the other countries showed a correlation between high concern by mothers regarding COVID-19 and tendency toward low resilience in children. In addition, an overall analysis of the eight countries indicated a significant statistical correlation between the mother's high anxiety level regarding the virus and the child's low resilience. Based on this result alone, we cannot definitively assert a cause and effect relation, but there is the possibility that the mother's worries affected the child's resilience. There is no proof that the mass media's stance had an effect on the mother's high anxiety level, but it is possible for reporting to promote anxiety to an excessive degree, which can then have an effect on the psychological state of children.

Readers may wonder why I have written about this here. As noted in the title, infections by the Omicron variant are increasing in number, but children have mild symptoms, and so far, there have been no critical cases or deaths among children. Of course, among the elderly and those with serious pre-existing conditions, infection by the Omicron variant can lead to a serious condition or possibly death, and recent statistics by the Ministry of Health, Labor and Welfare have reported 2 cases (out of 329 children ten years of age and under) in serious condition and no deaths*.

Having written this, I am likely to be reminded that there are, in fact, serious cases. Perhaps I will be scolded for implying that mild cases are nothing to worry about. However, the mortality rate of infection by the Omicron variant in all age groups including the elderly was 0.006% in Okinawa prefecture where the variant had first appeared and already peaked. This was lower than the recent mortality rate for influenza (2018-2019 season due to annual fluctuation) of 0.025% (excess mortality of 3,000 +12 million, the total number of patients)(1).

At present, if one child at a childcare facility or school becomes infected with COVID-19, government regulations require that all who were in close contact must refrain from attending school and self-isolate. However, some local governments have begun to closely examine infection by the Omicron variant. Kanagawa Prefecture has adopted a policy of closing classes when the number of infected students exceeds 10-15%(2).

Both COVID-19 and influenza continue to be harmful threats to the health of children and adults. In particular, COVID-19 is a virus that we have not experienced before. Up to the fifth wave of COVID-19 with the Delta variant, the mortality rate was extremely high, but note that at least infection by the Omicron variant is now at the level of influenza infection, and taking that into consideration, we can be a bit more positive going forward.

NOTE: Resilience is associated with a high level of security (low degree of anxiety). Quality of life (QOL) shows no significant difference. 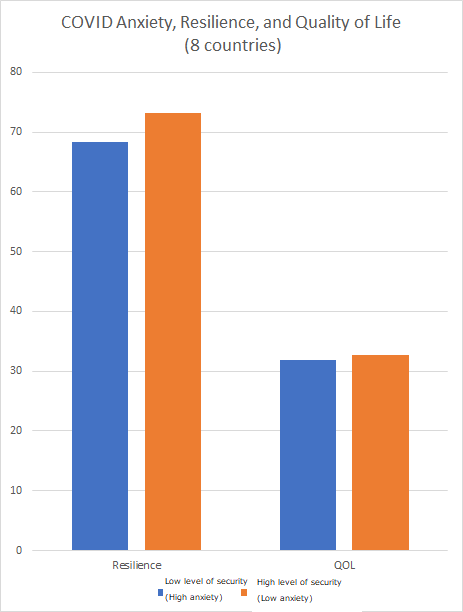 *Editor's Note: The original article was posted in Japanese on February 18, 2022. There have been four confirmed deaths linked to COVID-19 of children under 10 in Japan, according to the Tokyo Metropolitan Government and the Ministry of Health, Labour and Welfare.
https://www.metro.tokyo.lg.jp/tosei/hodohappyo/press/2022/03/31/31.html (in Japanese)
https://www.mhlw.go.jp/content/10906000/000917911.pdf (in Japanese)

Yoichi Sakakihara
M.D., Ph.D., Professor Emeritus, Ochanomizu University; Director of Child Research Net, Executive Advisor of Benesse Educational Research and Development Institute (BERD), President of Japanese Society of Child Science. Specializes in pediatric neurology, developmental neurology, in particular, treatment of Attention Deficit Hyperactivity Disorder (ADHD), Asperger's syndrome and other developmental disorders, and neuroscience. Born in 1951. Graduated from the Faculty of Medicine, the University of Tokyo in 1976 and taught as an instructor in the Department of the Pediatrics before working with Ochanomizu University.
Latest Posts in this Category:
Search