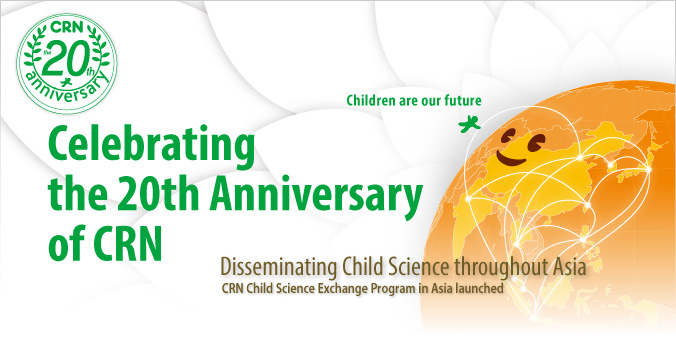 CRN was established in 1996 as a web-based Child Science research institute.
Our 20th anniversary is totally attributed to all of our contributors.

Upon celebrating the 20th anniversary,
we have launched the “Child Research Network Asia (CRNA)”
to find keys to the solution of issues involving children in Asia.

In celebration of the 20th anniversary, we hosted a round table talk
to discuss the developments of child research over the past years
and look towards a new future with Dr. Yoichi Sakakihara (current Director),
Dr. Noboru Kobayashi (founder and Honorary Director), and Dr. Takemochi Ishii (Special Advisor).

Greetings from Researchers around the World

Researchers from around the world who support the activities at CRN
have sent us greeting messages about issues involving children
looking at ten to twenty years toward the future, and what they expect from CRN.